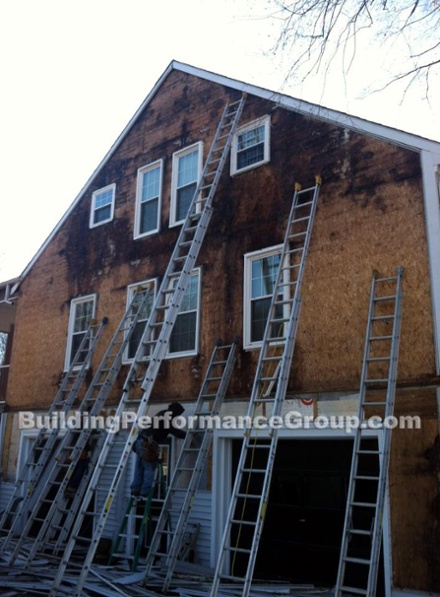 Building a house is expensive enough already. Why would you want to spend a bunch of money fixing something that could have been done right the first time…or the second time? Well, no one intends to have to spend that money, but the result of not understanding the control of moisture in building enclosures is just that. And a lot of money every year is wasted fixing problems that could easily have been avoided if a good Building Enclosure Control Freak had been involved.

Building a house is expensive enough already. Why would you want to spend a bunch of money fixing something that could have been done right the first time…or the second time? Well, no one intends to have to spend that money, but the result of not understanding the control of moisture in building enclosures is just that. And a lot of money every year is wasted fixing problems that could easily have been avoided if a good Building Enclosure Control Freak had been involved.

The photo below shows a home in Kentucky (climate zone 4A) that The Building Performance Group in Louisville posted on their Facebook page. This one was taken in January of this year. It’s a 20 year old home and had extensive moisture damage under the vinyl siding, so they pulled everything off and found…

Beneath the vinyl siding, they saw only oriented strand board (OSB). No house wrap. No felt paper. No Zip System sheathing. No drainage plane of any sort. The building enclosure in this home was naked under its cladding, and that wasn’t a good thing. It was missing the water control layer.

In an uninsulated building with a lot of air leaks (or in a building in a dry climate), this might work out OK. But this home is on the wet side of North America, and the walls were well insulated, having been built out of structural insulated panels.

Cladding materials do not keep all water out. Drainage planes, for that matter, don’t keep all water out either, but their job is to reduce it to an amount that the building assemblies can handle. This house had nothing between the vinyl siding and the outer OSB layer of the SIP wall. OSB is made of chips of wood. It can absorb water. It can rot.

(Two great sources of info about drainage planes are: Understanding Drainage Planes by Joe Lstiburek and All About Water-Resistive Barriers by Martin Holladay.)

This problem lasted 20 years before the owners finally had to do something about it. When the contractor they hired pulled the siding off in January, they found the mess you see above. Their solution was to nail up new OSB over the rotten OSB and then put housewrap and new siding on it.

The photo below shows the house this week, with the new siding coming off after only 4 months. As it turns out, not only is having a drainage plane important, but so is letting wet stuff dry out before you cover it up. The January contractors installed the new OSB over the rotten and wet old OSB. All that water had to go somewhere, so the new OSB absorbed it, swelled, and bowed the new siding.

How will they fix it now?

According to Eric George, owner of The Building Performance Group, the original OSB is “so deteriorated that you can’t nail or glue anything to it!” He said the windows were not flashed properly either, and the first repair, although they added housewrap, did not correct the flashing problems.

Now they’re faced with going back in and having to do almost everything over again. Because the wall is framed with SIPs, the repair job is a little trickier. They could remove the SIPs completely, of course, and reframe with two-bys. If they try to salvage what they can of the SIPs, they’ll need to address the structural issues since the new OSB won’t be bonded to the foam the way the original was. (It helps that this is a gable end wall.)

However they address it, one other item sticks out like a dead possum in an encapsulated crawl space: There’s no overhang. Extending the rake above that wall would help control water and minimize the chances for future moisture problems.

Building failures are almost always a result of moisture. Mostly it’s liquid water that comes out of the sky. Become enough of a building enclosure control freak to control that, and you’ll be doing a great service to homeowners…and their wallets.

Besides, it’s always good to recall what W.C. Fields said about water:

“You can’t trust water: Even a straight stick turns crooked in it.”

Photo credits: Both photos used with permission of Eric George of The Building Performance Group in Louisville, Kentucky.