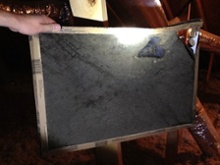 Last week, I spent a day going on calls with Phil Mutz of Moncrief Heating & Air Conditioning. It was a good reminder for me of what it’s like to spend all day responding to homeowners’ air conditioning complaints. As I’ve written in this space before, I spent summers going on calls with my grandfather, who owned an HVAC, electrical, and plumbing company in Leesville, Louisiana. I also spent three years as a home performance contractor, so I know what it’s like to spend time in hot attics…and yet I went out on this 90+ degree F day anyway.

Phil and I went out on 5 calls last Thursday, 4 of them for homeowners with problems keeping their homes cool. Here’s a brief rundown on what we found.

This was a fairly new house, probably less than 5 years old. The system had power, so we went straight to the attic and found the dirty filter you see above. The AC hadn’t been cooling at all, so Phil figured that the evaporator coil had frozen up. We replaced the filter and turned it back on. The ice had melted after they turned the system off, so when we turned it back on, it worked.

Well, when I say it worked, I mean that it started blowing cool air again. We know that because we had direct access to the cool air while we were in the attic: A 12″ supply duct was completely disconnected from the supply plenum, as you can see below. Holy moly! That’s a lot of cool air being lost to the attic. I wonder how long it was like that. When Phil asked about cooling in all of the upstairs rooms, the customer told him that her sister’s room was pretty hot even before the AC went out.

A third problem showed itself when we measured the static pressure. In this system, designed for 0.5″ total external static pressure, we found 0.9″. That means reduced air flow. In this case, as in many, the system is probably oversized for the house and the blower is oversized for the coil, so the reduced air flow is probably about the right amount, sort of. It’s certainly not efficient, though.

Looking around the attic, I saw a fourth problem: a Swiss cheese building enclosure. It had vaulted ceilings, attic kneewalls, and lots of air leakage sites. It had insulation that missed being in contact with the air barrier. And the cable guy screwed things up again, too.

Lessons: (1) Homeowners can keep their AC running by changing the filter. (2) Homeowners can spot disconnected ducts by poking their head in the attic or crawl space. (3) Too many duct systems have air flow problems. (4) You can cool a tent with an air conditioner, but you’ll spend extra money doing so. Problem #1: Dirty filter. We were 2 for 2 here. Again, the coil probably had frozen up but melted before we arrived. We checked the refrigerant charge at the condenser, as well as the superheat temperature. After replacing the filter and cleaning the condenser coil, the system worked fine.

The third floor system wouldn’t come on at all. Phil figured that the capacitor was blown, and indeed it was. When he opened the condenser panel to take a look, the condenser cap was blown outward, the telltale sign that it had ‘popped.’

This house also had a pretty bad duct system, but the homeowner couldn’t afford to do anything about it. That would be quite expensive, too, since the first and second floors are served by ducts that are mostly buried behind drywall. Thinking of buying a townhouse? You may well end up with a similar piece of crap.

Lessons: (1) Homeowners should replace the filter regularly. (Have I mentioned that yet?) (2) Capacitors last about 5 to 7 years, according to Phil, so you’re gonna lose your AC sometimes. Even worse, it’s most likely to happen in hotter weather because the AC runs a lot and the capacitor doesn’t have a chance to cool down. (3) Have a knowledgeable pro take a look at the HVAC system if you’re thinking of buying a townhouse.

This was one of those cases that’s both really easy and really hard. Their system wasn’t coming on at all. It’s a zoned system. We went into the attic and asked the homeowner to turn it on. And…

Voilà! We fixed it. Well, not really. The system came on and started cooling again. Phil figured there’s some problem with the zone control board that shows up intermittently. Maybe it just needed a reset and will work fine from now on. A more likely possibility is that Moncrief will be back out there trying to track down exactly what’s happening.

Intermittent problems can be very difficult to find and fix. “I don’t like to replace parts unless I catch a problem while it’s happening,” Phil told me. Lessons: (1) As with computers, rebooting solves some problems. (2) It’s hard to find a house with a good duct system.

This one was different, and the water damage had to do with a bad condensate line. But let’s cut to the chase and go straight to the duct system. The air conditioner we looked at was in the unconditioned attic. We were there in mid-afternoon, so it was HOT up there. I don’t generally sweat a lot but I was sweating that day. Anyway, here’s what we saw: How many problems do you see there? Here’s my short list:

Problem #2 means that the duct coming off the top will get more than its fair share of the air. That big turn of ~120° will choke it down a bit, but still, you should never, never put a supply duct right at the end of a plenum or trunkline. (Well, maybe there’s a rare case where it’s OK, but it’s certainly not here.)

Below is another example of how poorly the installers of this system understood air flow. Sharp bends add a lot of resistance! Lesson: No matter what the cooling problem is, it seems that most homes that HVAC companies go into are full of bad duct systems.

The homeowners here are in the process of moving into this 50 year old home in Atlanta and have noticed that it’s difficult to cool the upstairs. The closets get very hot and the laundry room gets even hotter. Yes, they have a typically bad duct system, but the bigger issue in this home is heat gain. If you’re a home energy pro, you know what the problems are already just from the photo above. This house had 5 dormers on the front, and you can see two of them in the photo above. The attic spaces get very hot. The walls aren’t insulated well—or at all. The vaulted ceiling insulation isn’t doing its job either. Heat pours into the conditioned space. We couldn’t get into the spaces between the dormers to see how well they were insulated, but the laundry room (shown above) on the back side of the house had a scuttle hole. Before even looking into that attic, though, I knew that those innocent looking surfaces you see in the photo were guilty of 1st degree heat gain. I could feel it in the air of the room. I could feel it by how hot the walls and ceilings were. Looking and seeing no insulation on many of the surfaces only confirmed what I already knew.

Lesson: Even with a functional air conditioner, some building enclosure problems are so bad that they really need to be addressed. This is one of those cases.

I really hate that expression, but in this case, I did indeed get to the end of the day of my ridearound with Phil of Moncrief Heating & Air. And, at the end of the day, I saw a bit of what HVAC service pros see every day. I imagine many of them suffer from PTSD.

When an air conditioner service company gets a ‘no-cool’ call, their immediate concern is to get the AC performing up to its capacity again. Many customers only want that cool air blowing out of the vents again and don’t want to go further. Of course, many of those no-cools are easily preventible by regular maintenance, like changing the filter.

Some customers, however, have the resources and interest in fixing the bigger problems, and that’s why HVAC companies are well suited for home performance work. Once you know about building science, you understand that ‘the box’ is only one component of the heating and cooling system, which also includes the duct system, the building enclosure, and internal heat gains. Then it becomes difficult to go in and just change out a filter or capacitor without also addressing the other problems.

Moncrief has been around since 1898, so they’re used to focusing on the box, like most HVAC companies. In the past decade, though, they’ve begun the transition to putting HVAC in the context of home performance. They’re addressing the duct system problems and regularly measure static pressure, for example, and have been involved with some spray foam jobs to fix faulty building enclosures.

If you’re in the HVAC business and not doing these things, just look at all the business you’re missing out on and all the customers you’re not helping as fully as you could. If you’re a homeowner, keep in mind that your problems with cooling may have other causes. Also, change your filter. Go, do it now. I changed mine today, and I’m embarrassed to admit that it was past due (although not as bad as the two above).