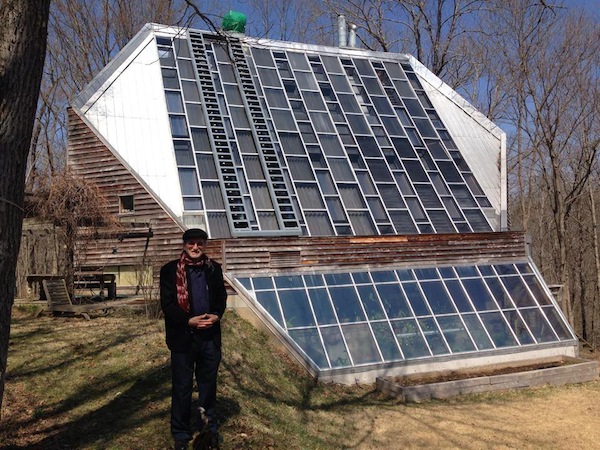 I’ve been in Lexington, Kentucky this week at the Midwest Residential Energy Conference. It was great! (And I played nice – I didn’t mention in any of my talks that I’m a Florida Gator.) One of the many highlights for me was getting to visit Richard “Dick” Levine‘s 1970s passive and active solar house. It’s not like any other house I’ve seen, and I’ve seen a few solar houses.

Your first question might be, Is that really a house? Yup. He chose the shape to maximize solar gain while minimizing the area of the building enclosure. It’s a cube sliced on the diagonal, which you can see in part 1 of the video series below. (That part starts at about the 3:30 mark.)

Solar collector for space heating. What you see in the photo above is not all windows dumping massive quantities of sunlight into the living space. Some of them are windows, and some are a special type of solar collector that he designed and patented. Each column of collector glazing has corrugated aluminum behind it, and as the air heats up, it rises naturally. The solar gain on those columns of air can provide up to a 100 degree Fahrenheit rise in temperature.

But he’s doing more than just using the stack effect. He designed a system that uses a fan to move the hot air from the top of each column down to rock beds in the basement, where the heat gets stored. When it’s cloudy, he can draw heat out of the rock beds for two weeks. It’s a pretty sophisticated system. The photo below shows the original controller for it. Composting toilet. The house has had a Clivus Multrum composting toilet since the beginning. Having built and lived in a house with a composting toilet myself, I get it. Many people don’t, however, especially if it means sitting over a big open hole straight to the tank in the basement. But think of all the water he’s saved by never having to flush a toilet in his home for four decades! The photo above shows the tank in the basement and the access door through which you remove the composted material.

Net zero energy. A few years ago, Levine installed photovoltaic modules on the studio adjacent to the house. Because of the cold winter this year, he hasn’t been net zero in his energy balance between consumption and production over the past year, but he was for the two years before that. Other updates. Levine recently installed a heat pump water heater and a decade or so ago had a ground source heat pump put in. The latter was mainly to get cooling with dehumidification. He had relied on natural cooling for a long time but finally decided that the humidity issue warranted a mechanical air conditioning system.

I didn’t get to spend a lot of time there, but it’s really exciting to see that a classic passive solar house from the 1970s—and one of the earliest ones, at that—has not only survived, but it has served its purpose well and evolved gracefully over time.

Levine is a new board member for the Passive House Institute US (PHIUS), as am I, so I look forward to working with him. He brings a wealth of knowledge, experience, and ideas, which will help immensely as we take this movement further down the road to more sustainable buildings.