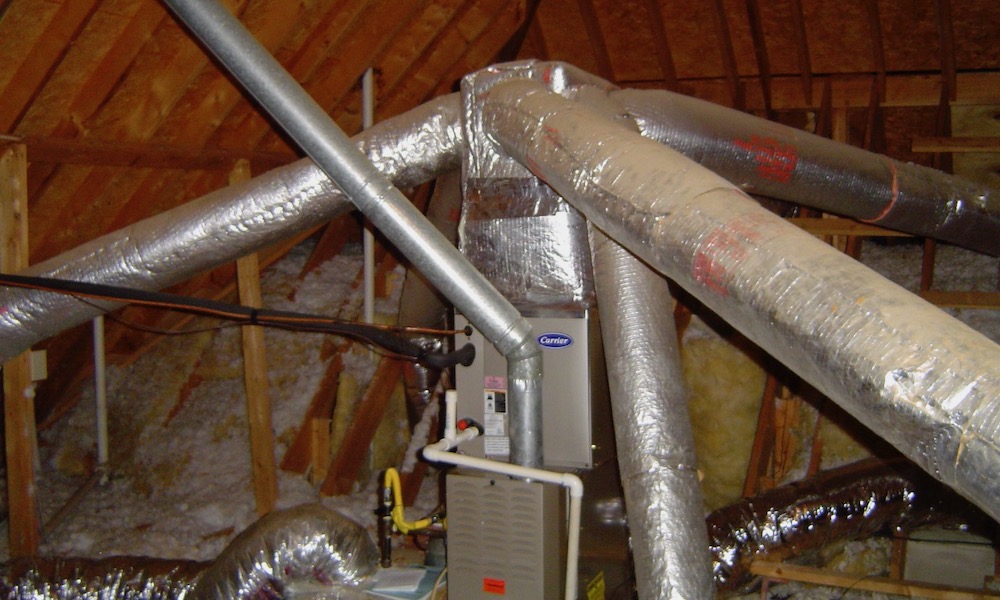 Remember that article I wrote about ducts installed against the roof deck and how I said it was probably the absolute worst single location for installing ducts?  Well, in the comments, Dave Roberts, a senior engineer at the National Renewable Energy Lab (NREL), wrote about a paper he co-authored last year and included a link to it. Up against the deck may be the worst place in the attic to install ducts, but Roberts shows that putting them in the attic at all is the worst place in the house you can install ducts.

The report, Ducts in the Attic? What Were They Thinking?, summarizes the research that’s been done about putting ductwork in unconditioned attics and basically says it’s about the stupidest thing we do in homes that do a lot of air conditioning. I encourage you to download and read this report. If you’re building or remodeling a home, make sure the general contractor (if it’s not you) and the HVAC contractor get copies.

I love the analogy they use to introduce one of the main problems with this location. “Heat exchangers,” they write, “are designed to transfer as much heat as possible from one fluid to another.” Comparing this configuration to a solar water heater, they make the case that putting air conditioning ducts in a hot attic is an effective way to heat up the conditioned air as it travels from the air handler to the conditioned space inside the home.

If you’ve studied heat transfer at all, you may recall that the rate at which heat moves from a warmer to a cooler body depends on the temperature difference, which we abbreviate as ΔT. An attic can get up to about 130° F in the summer, and the conditioned air entering the ducts is about 55° F or so. With hundreds of square feet of ductwork surface area in the attic and a ΔT of 75° F, the air coming out of the vents in your home will be significantly higher than 55° F. Throw duct leakage into the mix, and the problems are even worse.

What Roberts and his co-author Jon Winkler did, in addition to reviewing the literature about this topic, was to model the savings possible when you relocate the ducts from an unconditioned attic to the conditioned space inside the building envelope. They chose Houston, Phoenix, and Las Vegas as the locations for their modeled houses. The table below summarizes the main results.

In addition to comparing ducts in the attic to ducts inside the building envelope, Roberts and Winkler also looked at electricity savings of other measures, such as adding insulation, installing better windows, and using higher efficiency air conditioners. The table below shows that moving the ducts inside is the first thing you should do to save the amount of electricity you use. 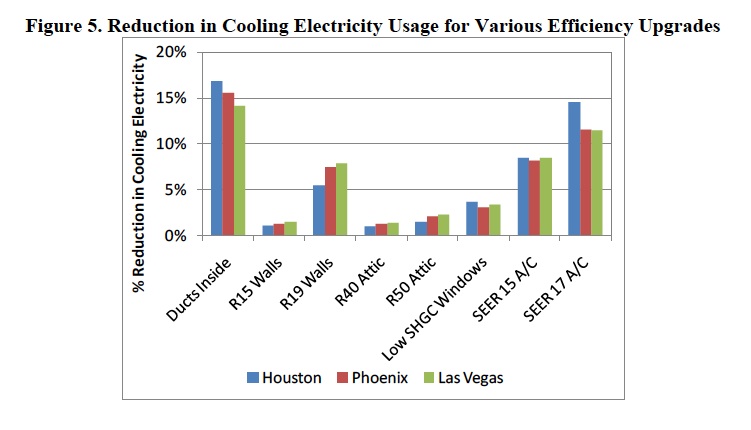 In addition to saving on air conditioning operating costs, the upfront cost of cooling equipment is lower in efficient homes. Roberts and Winkler looked at moving the ducts inside compared to other building envelope improvements, and again, moving the ducts inside beats all the other methods for achieving this objective, as shown below. 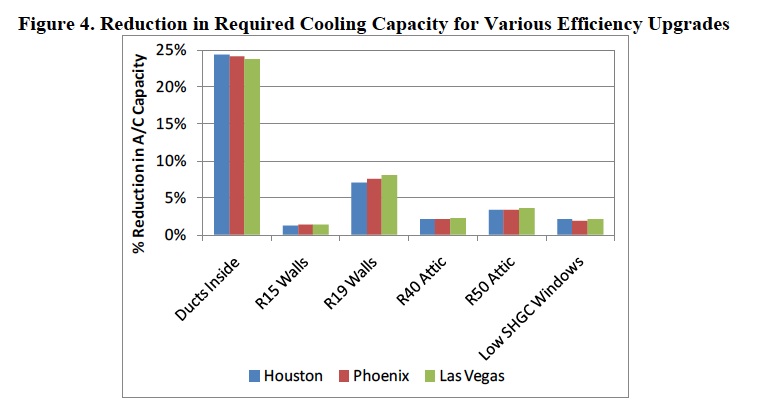 This report, which the authors delivered at the ACEEE (American Council for an Energy Efficient Economy) Summer Study in August 2010, shows definitively that putting ducts in attics in cooling dominated climates is a practice that needs to end.

Download the paper here:  Ducts in the Attic? What Were They Thinking?