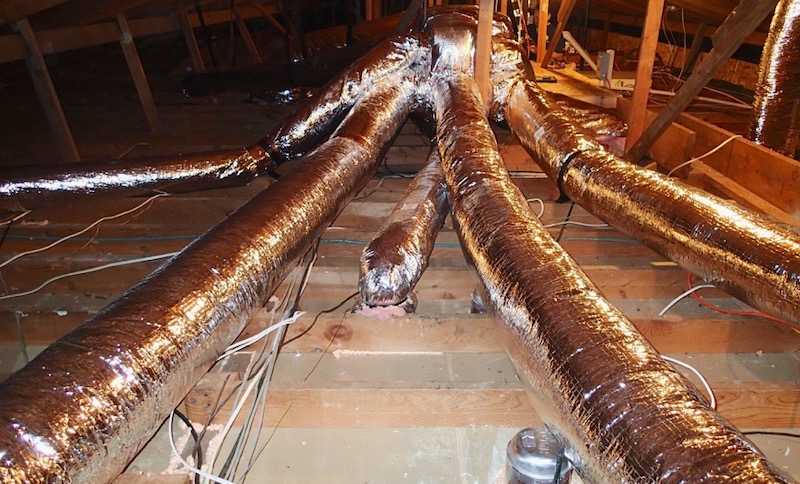 A lot of people have gotten the message that ducts for your HVAC system—and the system itself—should be in conditioned space. Researchers at the National Renewable Energy Lab (NREL) studied the effect of ducts in an unconditioned attic and found they add 25% to the cooling load in hot climates.  In their study, the NREL team assumed the ducts were sealed well.  New homes that have to pass duct tests are often sealed well, but the reality for many duct systems is that they’re leaky.  In addition to the losses associated with the leakage, unbalanced duct leakage creates other problems.  So, get those ducts out of an unconditioned attic if at all possible.

1. Never, ever put ducts against the roof deck

The absolute hottest part of an attic on a summer day is the underside of the roof deck.  It can get so hot that you can’t even keep your hand against it.  Why some contractors think it’s OK strap a duct right up against the deck is beyond me.  In addition to the heat, the roofing nails coming through the decking can puncture the duct insulation jacket or the duct itself.

2. Keep the ducts low in the attic

Attics get very hot.  On a sunny summer day, the air temperature in an unconditioned attic can get up to 120° F or even a bit higher.  But what you may not know is that attics aren’t uniformly hot.  The hottest air in an attic is up high.  The coolest is down near the attic floor.

In the photo above, the installer didn’t put the ducts in the worst place, but they certainly didn’t try to minimize heat gain either.  The temperature is lowest at the attic floor, and that’s where those ducts should be, as they are in the lead photo above.  (Note that the lead photo shows the ducts before he attic was insulated.  After the attic was insulated, those ducts were all buried in this dry climate house in California.)

3. Use a horizontal air handler

4. Seal the heck out of the ducts

Duct leakage is really bad when ducts are in an unconditioned attic.  Unbalanced duct leakage is even worse.  Seal them with abundant quantities of mastic.

5. Insulate the heck out of the ducts and air handler

Attics get really hot.  Insulation helps reduce heat flow.  Use a lot of it.  Unfortunately, standard duct insulation is available only up to R-8.  In a dry climate, you can bury the ducts in blown attic insulation.  In a humid climate, you might be lucky and get away with that if you put only R-8 on the ducts.  But buried ducts in a humid climate are at risk for condensation.  The building code now allows it, but only with R-13 on the ducts before you bury them in IECC climate zones 1A, 2A, and 3A.

6. Increase the air velocity in the ducts

This recommendation helps maintain comfort in the home.  With ducts in conditioned space, slower moving air reduces the resistance to air flow, which is a good thing.  When ducts are in an unconditioned attic, the air inside picks up heat in summer.  The more slowly the air moves through the duct, the more the temperature of the conditioned air will rise.  Moving the air faster spreads the heat gain across more air with less temperature rise in each cubic foot.  So design the duct system for faster air in this case.

7. Keep your attic cooler with a reflective roof or radiant barrier

Another way to reduce heat flow into your ducts from a hot, unconditioned attic is to keep the attic cooler.  The best way to cool your attic is by stopping the heat before it has a chance to enter by using a reflective roof.  A good second choice would be to install a radiant barrier beneath the roof deck.  A really bad choice would be to use powered attic ventilators.

Yeah, ducts in an unconditioned attic are often a big liability.  They require you to get a bigger air conditioner and spend more on your heating and cooling bills.  But follow the guidance above, and you can make that liability much smaller.

The Best Way to Cool Your Attic