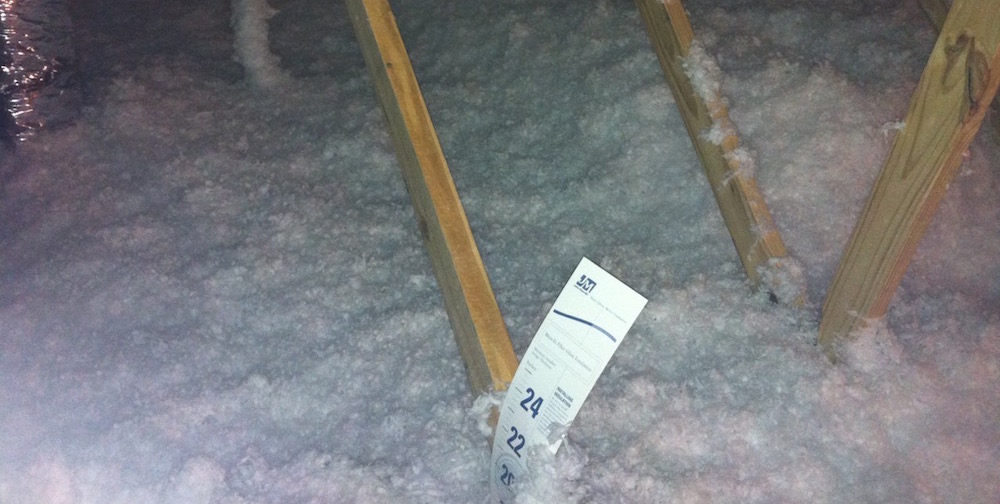 Poor installation of insulation matters.  Even in cases where you might think the R-value won’t be affected, it is.  Eleven years ago this month, I wrote an article about one of the most important and misunderstood principles in building science.  The article is titled Flat or Lumpy – How Would You Like Your Insulation?  In it, I showed what happens to the R-value when a poor installation of insulation is particularly bad.  The attic in question was supposed to be a uniform R-30 but instead got only R-10 over 50% of the area and the other half was R-50.  It does not average to R-30.  In fact, it averages to a mere R-17.  See that article for details.

As you can see, when the insulation is shorted only an inch or two over half the attic and increased by that amount on the other side, the hit to R-value isn’t too bad (-1% and -3%).  A 3 inch short on the left side knocks 6% off the R-value, and beyond that you’re in double digits, which I would find unacceptable.

If the installers haven’t predetermined how much insulation material they’re going to install, another way poor installation of insulation can reduce R-value is by getting the correct amount over part of the attic and shorting the other part.  The two graphics below show this scenario.  In the first one, the shorted side gets 2″ less insulation than it was supposed to.  The top line shows perfect installation of a uniform 12″ depth of insulation.  The next five lines show the R-value and percent reduction in R-value when various portions of the attic are shorted those 2″.

If the installers short you 4″ over part of the attic, here are the resultant R-values and percent reductions in R-value.

A better way to ensure you get what you’re paying for is to specify the average thickness of insulation as well as a minimum thickness. The tool that determines that for blown insulation is the depth marker, as shown above.  Make sure your contractor puts in a lot of them.  It’s easy for installers to pile it up to the required depth at the markers and install less between the markers.  With more markers in the attic, it’s easier to see problems.  With spray foam insulation, the tool is a depth gauge (shown below).

After the installers finish blowing or spraying the insulation, look at those markers or check the depth in enough places to know you’ve got enough insulation.  Average depth alone is not a sufficient metric to determine the quality of installation of blown or sprayed insulation.

2 Ways to Get the Best Insulation in Your Home