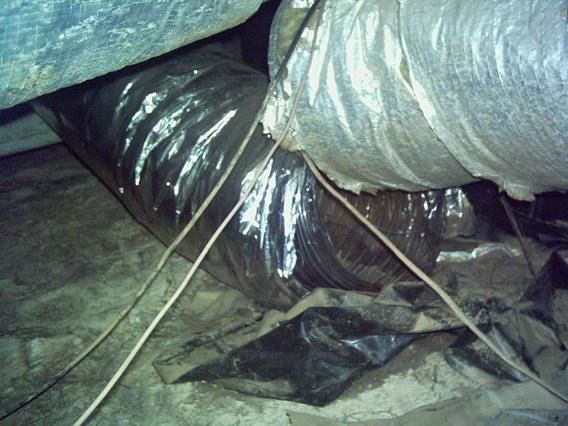 Duct leakage is a big deal. It’s one of the top three energy wasters in most homes (air leakage and cable TV set-top boxes being the other two). Researchers at Lawrence Berkeley National Lab found that duct systems leak on average about 10% of the supply air they move and 12% of the return air (download pdf). In far more homes than you might suspect, the main culprit is a disconnected duct, as shown below, but a typical duct system has a lot of other leaks, too. But another problem occurs with the duct leakage to cause even more wasted energy.

Where do the ducts leak?

In addition to how much air is leaking from the ducts, you need to know where it leaks. Leakage inside the building enclosure isn’t so bad because it’s still in the conditioned space. You still don’t want much of it, though, because it can cause comfort problems and maybe a little extra energy use. Leakage outside—in an unconditioned attic, crawl space, basement, or garage—is what you really pay for…and sometimes you pay twice. Here’s why.

Whether the ducts leak inside or outside the building enclosure is only one leakage location that matters. Your home is also affected by how much leakage occurs on the return side and the supply side of the duct system. Take a look at the diagram below. In this case, all of the leakage is on the return side of the duct system, the side that pulls air back to the furnace, air conditioner, or heat pump to be heated or cooled. Without looking below, what do you think return leakage by itself does to the pressure in the house?

Likewise, the duct leakage could be all on the supply side, the ducts that send conditioned air back into the house. The diagram below shows that scenario. How do you think the pressure in the house is affected by this type of duct leakage? Well, let’s put some numbers on it and take a look. First, let’s assume we have a 2.5 ton air conditioner and further assume it’s moving 1000 cubic feet per minute (cfm) of air. On the supply side, the ducts are putting 1000 cfm of air back into the house because there’s no leakage. On the return side, let’s say we have 100 cfm of leakage. That means in this case, the return ducts are pulling in 100 cfm of air from the unconditioned attic. Since 1000 cfm total is going through the air handler, it has to pull 900 cfm from the house. Hmmmm. Pulling 900 cfm from the house and putting 1000 cfm into the house. The pressure is higher inside the house than the pressure outdoors. We say the indoor pressure is positive. That extra air’s gotta go somewhere, so it leaks out. We get more exfiltration from the house when this system is running than when it’s off.

Most blowers are already fighting against the extra pressure in the duct system. The National Comfort Institute has done a lot of air flow testing, and they’ve found the typical restrictive duct system results in a total external static pressure (TESP) of 0.8″ of water column (iwc) whereas the standard blower is rated for a maximum TESP of 0.5 iwc. Assuming 200 cfm of supply duct leakage here, we end up with a negative pressure in the house and more infiltration. Again, we may have less air flow in the HVAC system, too.

The two scenarios I described above have either all return duct leakage or all supply duct leakage, but all that really matters is that you have unbalanced duct leakage. You’re most likely going to have leakage on each side.

I don’t know who first said it, but I think pretty much everyone who goes through a home energy rater class learns an easy way to remember what happens.

How to find out if you have unbalanced duct leakage An easy way to find out if you have unbalanced duct leakage is to turn on the air handler and see what happens to the house pressure. You can do that in more than one way, of course. You could use a manometer, if you have one.

Another way to determine if you have unbalanced duct leakage is to use what Joe Lstiburek calls the “look, lick, and squirt test.” With the air handler running, you can look for evidence of air movement in spider webs or tissue paper. You can also lick your fingers and hold them in a slightly cracked door to feel if air is moving through the opening. Or you can squirt a little bit of smoke near the opening.

If you’re a professional, though, you should heed Joe’s advice about this test: Never let the client see you licking your hands.

So what do you do if you have unbalanced duct leakage? Well, the quickest solution would be to balance it by poking some holes in the less leaky side of the duct system. That’s a terrible idea, though, and I want you to forget you ever heard it. And don’t think of a pink elephant either!

No, the real way to fix it is to seal the duct leaks. But be careful! Sealing a duct system may result in some unintended consequences that could be worse than the problem you’re fixing. If you have a restrictive duct system, you could reduce the air flow enough to freeze the evaporator coil, burn out the compressor, or crack the heat exchanger.

Duct sealing has to be done in conjunction with air flow measurements and a complete duct system retrofit or replacement.

I’ve been meaning to write this article for a long time. I finally got the inspiration to write it because I need it to support an article I’m going to publish soon, probably next week. I recently got asked what I thought about a project on Kickstarter, and I was aghast at what I saw. I mentioned it in my article on the Aros smart window air conditioner, and now you know it’s related to unbalanced duct leakage. Can you guess what the idea is?

Update:  I did write that article. It’s about so-called smart vents. You can read it here:

Are You Using Vent Caps for Duct Leakage Tests Yet?