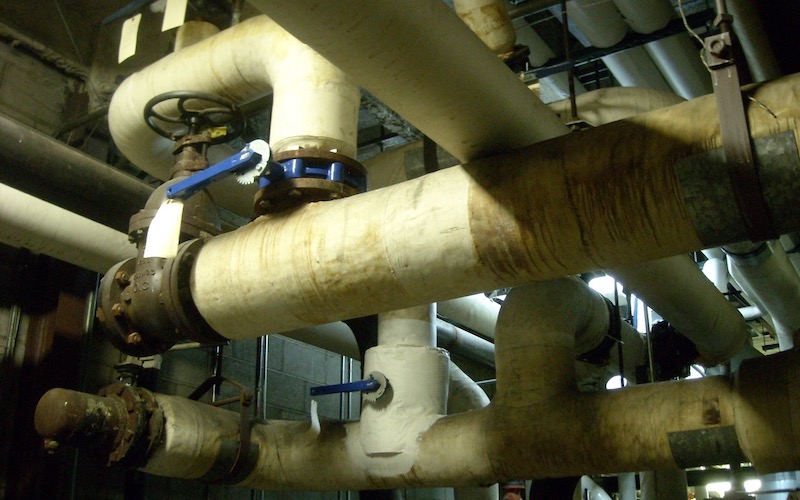 Sizing a heating or cooling system should start with an assessment of the heating or cooling load.  Nowadays, we know the physics behind heat transfer, so  we can come up with fairly accurate predictions of how much heating and cooling a building will need even before it’s built.  Things were different back in the 1800s.  They didn’t have air conditioning (not as we know it today anyway), and the engineering of heating systems wasn’t as well developed.

Of course, just because we can calculate the loads accurately doesn’t mean it happens all that often.  A heck of a lot of homes get their HVAC systems sized by rules of thumb.  Often it’s just a ton of heating or cooling capacity for some amount of floor area in the house.  A common one for air conditioning here in the southeastern US is one ton of capacity for each 500 square feet of conditioned floor area.

Yesterday, I opened my weekly newsletter from HeatingHelp.com and learned about a rule of thumb method for calculating heating loads that actually worked pretty well.  It’s called the Mills Rule, and it makes a lot more sense than the modern 500 square feet per ton rule.  The Mills Rule was nicknamed the 2-20-200 rule because of the calculation involved, and Dan Holohan does an excellent job of telling the story in his Dead Men Tales podcast.  (I highly recommend getting on their mailing list or subscribe to the podcast if you’re interested in HVAC, past and present.)

Add those three numbers together, and that gives you the Equivalent Direct Radiation (EDR) in square feet.  For typical heating conditions in those 19th century buildings, each square foot of EDR provided 240 BTUs of heat to the building.

Note that it’s not a true load calculation because it doesn’t use actual heat transfer equations.  It really is just a rule of thumb.  But it worked well enough for those old buildings because Mills figured out the factors (2, 20, and 200) that led to a good approximation of the heating load.  Actually, I should say it led to a good approximation of the capacity of steam heat they needed in those buildings.

Why are modern rules of thumb so bad?

I don’t do anything with steam heat, but this story is interesting in contrast to the common rule of thumb based on floor area only.  Mills factored in the all of the building enclosure area, and that’s where the heat loss and heat gain happen.  He also differentiated between what Manual J calls “opaque panels” and glazing because the R-values of those components were different.  And then he accounted for infiltration.

The modern rule of thumb doesn’t do anything with the windows either, and they can have a huge effect on the cooling load.  That house in the photo above, for example, would have a significantly higher load if the side with the windows is facing west compared to it facing north.

We have computers and software and good load calculation protocols like Manual J now, so I’m not advocating for better rules of thumb.  Am I?

Heat Is a BTU-tiful Thing!