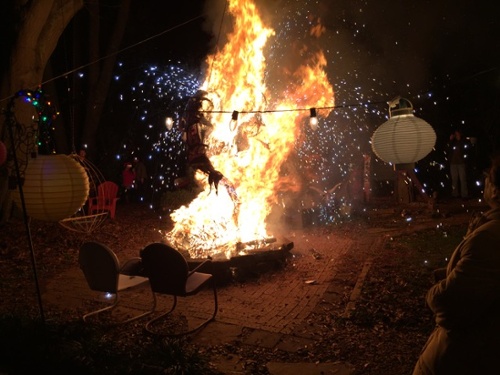 Every year on New Year’s Eve, I head over to some friends’ house here in the Atlanta area. They have the best party around—Possum Drop—and I’ve been going for nearly a decade now. As midnight approaches, the newly-crowned Possum Queen leads the countdown. The possum is lowered slowly onto the fire and then erupts in an explosion flames and sparks. Don’t worry. It’s not a real live possum. It’s a giant possum made of chicken wire, papier-mâché, fabric, and other scavenged materials…and it’s stuffed full of fireworks!

How much heat can you get from a Christmas tree?

Naturally, the backyard bonfire is fueled by Christmas trees, an abundant fuel source in the days leading up to Possum Drop. So you might wonder, how many Christmas trees does it take to burn the possum?

And once you ask that question, you’ve started thinking like a 19th century scientist…sort of. Take Thomas Tredgold and Nicolas Clément, for example. Both worked on a similar problem: relating a quantity of fuel to a result of burning that fuel. Both came up with similar definitions.

According to Dan Holohan, who is famous for helping to carry 18th century steam heating knowledge into the 21st century, Tredgold is credited with inventing the British Thermal Unit, or BTU. In his article The Origin of the British thermal Unit, Holohan quoted from Tredgold’s book:

“I take as the measure of the effect of a fuel, the quantity, in pounds avoirdupois, which will raise the temperature of a cubic foot of water one degree of Fahrenheit’s scale.”

The definition has evolved a bit since then, though. Now we define it thus:

One BTU is the amount of heat needed to raise the temperature of one pound of water by one degree Fahrenheit.

Instead of a cubic foot of water, we use a pound of water now. Also, Tredgold was thinking of this in terms of the pounds of fuel needed to effect such a change. Now we say that change is caused by the introduction of a quantity of heat from the combustion of the fuel. That’s a subtle but important difference.

But let’s make this a bit more real. When you burn a kitchen match all the way down, it gives off a  quantity of heat that’s just about one BTU. If you have a furnace that’s rated input capacity is 60,000 BTU per hour, that’s like burning 60,000 kitchen matches per hour if it runs continuously.

(Some definitions use the word “work” in place of “heat” because we know that heat is but one form of energy and is also equivalent to mechanical work. See the Wikipedia page on the BTU for more.)

You know what Clément called it, right? The amount of heat required to raise the temperature of a kilogram of water one degree Celsius is a Calorie. That’s capital C calorie, the kind they use in quantifying food energy. Some definitions are based on heating a gram of water, which gives you the little c calorie, 1,000 times smaller than the Calorie.

As you might expect, both scientists came to study of the effect of burning fuels because of all the interest in steam engines and steam heating in their day. And they wanted to know how much fuel you had to add to the fire if you were using coal, wood, or something else. The BTU caught on back in the 19th century, and we still use it here in the US.

Don’t ask a Brit for any kind of heat measurement in BTUs, though. They’ve moved on, as has nearly the entire world, to the International System (SI) of units, in which the basic unit for heat is the Joule. We Americans are about the only ones still using “those annoying Imperial units,” as a British reader of this blog once put it.

Anyway, once you have a definition of something like the BTU, you can use it to understand how much heat you can get out of various fuels. The US Energy Information Administration is a great place to go for these data, and that’s where I got the numbers here:

These fuels are sold in a variety of units (barrel, gallon, kWh…), but by converting them all to the same unit, BTUs in this case, we can do an apples-to-apples comparison. For example, if we have the costs of the various fuels in the units they’re sold in, we could find the unit cost per BTU of each. That can be handy when looking at home energy use and is the basis of the home energy spreadsheet I put together (although the unit I use there is the kilowatt-hour).

Even though the end result is a bit different, the same thing happens at Possum Drop. We throw Christmas trees onto the fire and get a carefully controlled amount of burning and explosions. At least it seems we have that level of precision and control since their house hasn’t burned down yet.