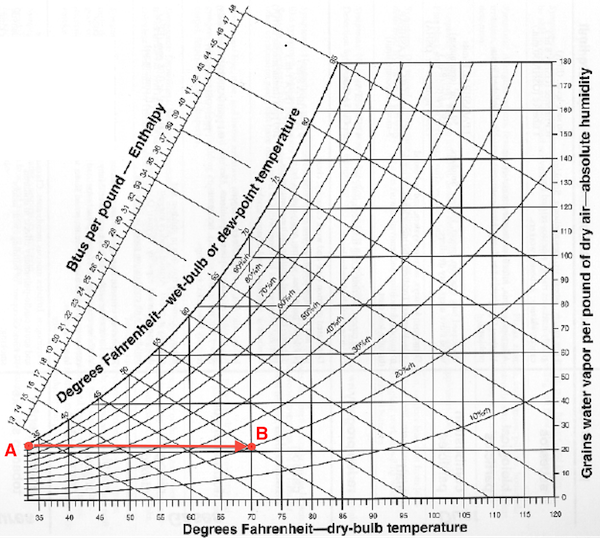 Relative humidity is what everyone likes to talk about. It gets the attention, but it can be confusing, especially when the temperatures drop. The truth is that, despite a high relative humidity, cold air is dry air. For example, at one point yesterday, we had a relative humidity (RH) of 97%. Seems humid, eh? It’s not really. Not in terms of how much water vapor is actually in the air, that is. The psychrometric chart above shows how this works.

The two points I’ve highlighted on the chart are:

They’re connected by the arrow, indicating that when that cold, seemingly humid, outdoor air leaks into a home by infiltration, it warms up. Let’s assume that the mass of air leaking in doesn’t gain or lose any water vapor molecules along the way.

On a nice spring day when the temperature has risen to 70° F and the RH is 50%, the humidity ratio is about 50 grains/lb. Can you find that on the chart above? Can you find what the dew point is for that condition? (Answer below)

One of the worst kind of days we have here in the Atlanta area is when it’s about 80° F an 80% RH. Ugghhhhh. The absolutely humidity is about 122 grains/lb, and the dew point is 73° F. And that’s not even the worst I’ve experienced in the Southeast. Atlanta has nice, fairly mild summers compared to where I was born: Houston, Texas.

If you have a smart phone, you can find apps that do psychrometric calculations for you. I have two on my iPhone. One is the Ultra-Aire Psychrometric Calculator made by Thermastor. They make great dehumidifiers,* and their app can help you find how much water removal you’ll get based on the input and output conditions of the air. You can also do basic psychrometric calculations with relative humidity, absolute humidity, dry bulb temperature, and dew point. I also have one called Psychrometrics Lite, which does the basic calculations and allows you to adjust for altitude. Both of these are free. You can get more advanced apps that cost a few bucks.

* This is an affiliate link. You pay the same price you would pay normally, but Energy Vanguard may make a small commission if you buy after using the link.