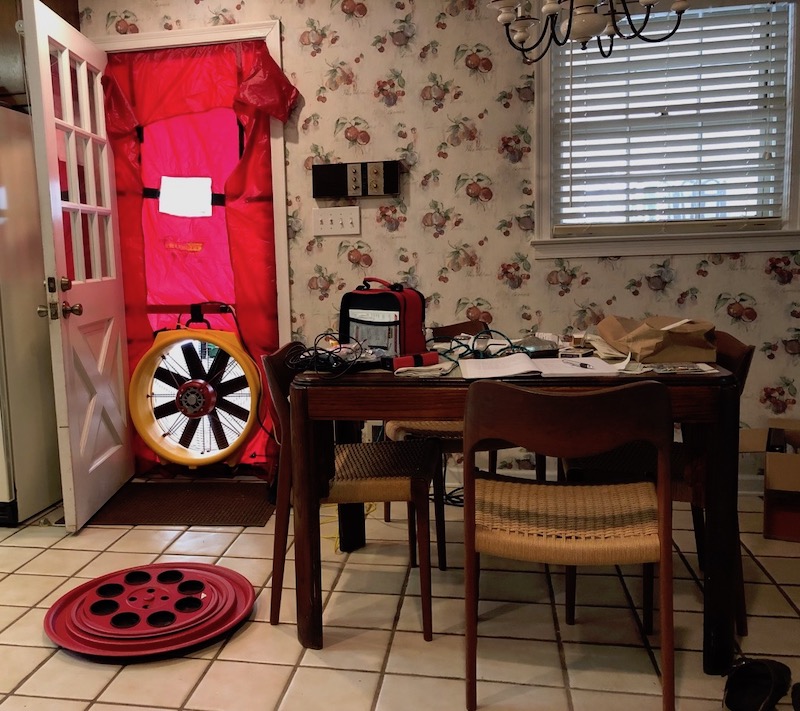 At the gym the other night, I was thinking about a tweet I’d seen the day before: “@EFL_Guy ‘Air leaks through surfaces not volume” Joe Lstiburek.'” I’d been meaning to blog about this for a while, so, during my workout, I began planning my article.

If you know nothing about the field of building science, Joe’s statement above probably seems so obvious that you wonder why anyone would even utter it. Had it only been so obvious to a few scientists back in the early days of testing buildings for infiltration, we wouldn’t be in the mess we’re in now.

You see, everyone who learns how to use a Blower Door these days gets indoctrinated into the cult of the ACH (Air Changes per Hour). You take the raw number from your test – cubic feet per minute (cfm) of air flow with a big pressure difference between the house and the outside – and you divide it by the volume.

Why volume?!  Why?  It’s perfectly obvious that if you want to normalize a number, you divide by something that makes sense.  Would it make sense to measure the efficiency of your car in miles per square foot of gasoline?  That’s a similarly absurd ratio because you pay for gallons of gasoline, and a given volume of gasoline can have different surface areas depending on the shape of the container.  (That reminds me of the joke about the spherical cow.)

Same with houses.  Two houses with the same volume can have different surface areas.  And, as Joe said, air leaks through the surface, not through the volume, so not only do we not care about volume when we’re talking about air infiltration, it’s misleading.

The whole reason to divide the cfm50 by anything is so that you can compare infiltration rates in different size houses.  (The subscript above gives the pressure difference between inside and outside during the test, 50 Pascals.)  If you can’t get a fair comparison between small houses and large houses if we use volume, why are we using volume?

Here’s another example for you.  Let’s say you want to paint your house, so you go to dummies.com, where they tell you that it takes about one gallon per 350 square feet of surface area you’re going to paint.  What if over at elstupido.com, however, they told you that you’ll need one gallon for each thousand cubic feet of volume?  Whose advice are you going to take?  Right!  Dummies are better than el stupidos.

Air leaks into and out of the house through all the surfaces that make up the building envelope – floors, ceilings, and walls.  If you wanted to reduce your home’s infiltration, you wouldn’t seal the volume.  You’d seal the leaks through the surfaces.  (Just don’t seal those weep holes at the bottom of your brick walls!)

Defenders of the ACH do make the seemingly valid point that it’s conceptually easier to explain to homeowners.  When you extrapolate from a house under test pressure to a house under ‘natural’ pressure differences, the ACHnat tells you how quickly the air in your house is exchanging with outside air.

If, for example, a house comes in at 0.5 ACHnat, the energy auditor will tell the homeowner that all the air in their home is exchanged with outside air every two hours.  Yes, it’s an easy concept for homeowners to grasp, but is it true?

No, it’s a lie, and here’s why.  First, the extrapolation to go from ACH50 to ACHnat is highly inaccurate when doing a single point Blower Door test, which is what most energy raters do.  Second, the amount of air in the house is less than the volume of the house because we tend to have things like walls and furniture inside. Third, the whole concept of ‘natural’ pressure is artificial.  The pressure difference across a home’s building envelope varies from season to season and minute to minute.  It’s affected by wind, the stack effect, and, especially, mechanical systems.

So, yeah, ACHnat is an easy concept to explain, but it’s a pretty shaky concept.

As I commented in Martin Holladay’s blog post on Blower Doors a few months ago, there’s an easy solution to this problem.  Let’s use the quantity that Southface developed about six years ago – the Envelope Leakage Ratio (ELR). Divide the cfm50 by the square footage of the building envelope.  It’s simple.  It makes sense.  And, I think homeowners can understand this concept, too.

If we have this tool – the Blower Door – that gives us numbers with a precision of +/-3%, why would anyone want to manipulate the results into something with uncertainties of 20%, 30%, possibly even 50% or more?! It’s time to quit using ACH to talk about infiltration.

[Read the followup article that breaks this down to the fundamental issue: It’s the Hole – Understanding What a Blower Door Is for.]