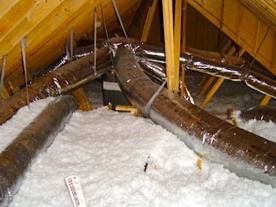 It started on Twitter the other day. I posted the photo you see to the left, and a discussion on flex duct ensued. One person, who’s been known for taking strong stances now and then, saw it and said, “Flex isn’t allowed in any of the green building programs (that are worth a damn that is).”

It started on Twitter the other day. I posted the photo you see to the left, and a discussion on flex duct ensued. One person, who’s been known for taking strong stances now and then, saw it and said, “Flex isn’t allowed in any of the green building programs (that are worth a damn that is).”

His reasons are solid for thinking flex should never be used. Here are some of the things he tweeted: “…easy to damage, easy to fail, and impossible to clean. Also less efficient.” In another tweet, he wrote, “Rodents chew through flex, cable guy kicks it, tape falls apart…”

I’ve posted plenty of photos of bad flex duct installations in this space, and have seen all the problems he mentions and more. Remember Stumpy, the flex duct amputee? This photo (right) has become so popular that it’s showing up in other people’s presentations (with no attribution, of course. Grrrrrrr…).

Flex duct is almost never installed correctly. I’ve been in thousands of houses, both new construction and older homes, and I’ve seen a lot of flex duct. Mostly the installation is pretty bad. In new ENERGY STAR homes or EarthCraft Houses, it’s usually better, but I don’t think I’ve ever seen one that made me step back and say, ‘Now that’s how you install flex duct.’

The most common problems I see with flex are: So, yeah, flex duct has a lot of problems. Should it be banned from green building programs? And which programs allow it? Well, ENERGY STAR (which isn’t a green building program but ducts are well within its purview) allows flex. LEED for Homes allows flex. The NAHB Green Building Standard allows flex. Hmmmmm. I think there might be a program in Minnesota that doesn’t allow it, but I don’t know of any others. (Readers, please let me know of any programs you’re aware of that ban flex duct.)

Well, if we’re not going to use flex, what’s left? There’s duct board, rigid fiberglass with a foil facing, but, in my opinion, that’s worse than flex. If any duct product should be banned, it’s duct board.

That leaves rigid sheet metal, often called hard pipe. I agree absolutely that hard pipe is the best duct to install. Here’s why:

But hard pipe is not without problems. Some of the leakiest ducts I’ve tested have been made of sheet metal, not flex. The photo you see at the right is one that I tested and sealed about six years ago, and it turns out that it was being held together mainly by the duct insulation! When I pulled the insulation off the branch you see here, it collapsed.

Although I’ve been accused of wanting to take away your freedom of choice (because of my articles last week on can lights and McMansions), I do not think that flex duct needs to be banned. I’d just like to see it designed and installed properly. Its best use is for relatively short runs in a trunk-and-branch system, not entire air distribution systems.

The problem here is not the product; it’s the process. It’s also part of the larger issue of the HVAC industry underperforming, to put it nicely. Flex duct, I believe, can have a place in high performance homes. We just need tighter quality control.