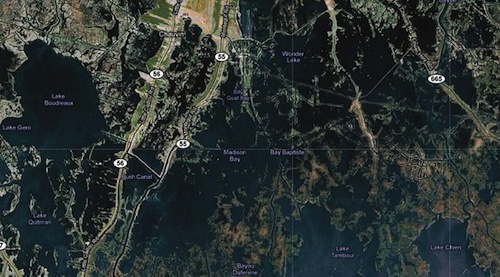 I was born and raised in the oil patch, getting my start in Houston and then moving to south Louisiana when I was 10 years old. Spending as much time as possible fishing, hunting, trawling, and hanging out in the marsh and on the water was the best part of my life in south Louisiana. I paddled pirogues all over the bayous and loved it.

I was born and raised in the oil patch, getting my start in Houston and then moving to south Louisiana when I was 10 years old. Spending as much time as possible fishing, hunting, trawling, and hanging out in the marsh and on the water was the best part of my life in south Louisiana. I paddled pirogues all over the bayous and loved it.

Bayou country comprises narrow strips of land along the bayous used by trawlers to travel between their homes and the lakes, bays, or Gulf of Mexico, where they trawl for shrimp. Not many Cajuns trawl anymore, though. In the satellite image above, you can see Bayou Petit Caillou, along which Chauvin sits and highway 56 runs. I lived there from 1971 to 1979. If you go a little further down, you run into the end of the road at Cocodrie.

st year I visited Chauvin for the first time in over two decades and found that things have changed quite a bit. The photo here shows that all of the trees have died on the other side of the levee on the back bayou. That’s because the water back there, which used to be mostly fresh water, is now salty. Where I used to fish for bass and perch, my friends now catch redfish.

The levee, by the way, was built to keep the water from flooding the narrow strip of land along the front bayou where everyone lived. Along with the levee, there were pumping stations, like the one shown below. These pumps were close to the house I lived in my last four years in Chauvin, and I spent a lot of time back there. What you see as mostly open water now, though, was mostly marsh with little strips of land here and there. Yes, there are still little bits left, but it’s nothing like it was in the ’70s. You can see another illustration of how high the water has risen in the photo below, taken last year when my friend Dean and I went fishing (for redfish, not bass) near my first house in Chauvin, when we lived ‘down the bayou.’ See that fence? That used to surround a cow pasture. As the water kept rising, lower areas like these got flooded and they had to move the levee forward, surrendering formerly good land to the water. I’ve got more pictures, too, showing, for example, how Lake Boudreaux is now much bigger than it used to be and practically lapping up on the road to Cocodrie. It looks like the community of Petit Caillou, named for the front bayou, may be gone within decades.

Why is this happening? A few years ago I picked up the book Bayou Farewell by Mike Tidwell. In his research on the rising water and saltwater intrusion in south Louisiana, he visited Bayou Petit Caillou and a couple of others. In the end, he blamed the levees on the Mississippi River and the canals cut through the marshes by the oil industry. The levees prevented the Mississippi from replenishing the marsh with its abundant silt. The canals allowed the Gulf to chip away at the marsh and carry it out to sea.

Take a good look at the photo below, a satellite image of one small area east of Bayou Petit Caillou. Those aren’t streets and cul-de-sacs you’re looking at. They’re canals, hacked into the marsh by the oil industry, seeking access to the rich deposits of oil and gas in the area. Is it any wonder the whole area is melting into the Gulf?! (If you want to see this yourself, go to Google maps and type in Chauvin, LA, switch to satellite images, and scroll around. There’s plenty of it there.) As I said, I spent a lot of time in boats when I lived there in the ’70s. At ground level, we didn’t see these canals as a problem. Instead they meant that we could get into a lot more areas to go fishing and hunting, thanks to the oil industry. Now we know that the long-term implication of such canals is the destruction of the wetlands.

So, about that BP oil spill, yeah, it’s a huge problem. A disaster. But let’s look at the whole picture and see that the oil industry has been destroying south Louisiana for a long time. That, in my opinion, is the real tragedy.

At the same time, the oil industry has enriched south Louisiana. My step-father was a tool pusher for Penrod Oil Company. I have a nephew and a cousin who work offshore. We all use the products of the oil industry every day, and we’re not getting off the stuff anytime soon.

I’ve considered myself an environmentalist for my entire adult life and have devoted my life to conserving energy, not just using it efficiently. I focus on residential energy use now and know enough building science to help people find the problems in their home and recommend the best fixes.

I’ve also learned in my studies of peak oil that our whole economy runs on oil and will for a long time yet. We will be forced to use less and less of it as production starts tapering off, though. As some people say about their relationship status on Facebook, my feelings about the oil industry ‘are complicated.’