Here’s another item for the myths of energy conservation category: In most homes, ceiling fans do NOT save energy. It’s not that they can’t save energy; it’s just that most people don’t understand how to use them to do so, and the potential savings are pretty small.

Here’s another item for the myths of energy conservation category: In most homes, ceiling fans do NOT save energy. It’s not that they can’t save energy; it’s just that most people don’t understand how to use them to do so, and the potential savings are pretty small.

Yesterday, for example, I saw a house right across the street from the Bobby Jones Golf Course with two ceiling fans on the front porch (photo below). Both were running. Not a single person was on the porch to feel the air moving. Unfortunately, I see this all the time here in Atlanta. Many people leave those fans running 24-7 in the summer.

And that gets us to the two fundamental principles of ceiling fan operation:

It’s pretty simple. Electricity goes into a motor. The motor’s not 100% efficient, so some of that electricity immediately becomes waste heat that gets dumped into the room. Put your hand on any motor that’s been running for a while, and you’ll feel what I’m talking about.

The remaining electricity turns into motion, which moves the air, and it too eventually converts to heat in the room. So, the physics of point #1 above is clear. The longer you run fans in your house, the 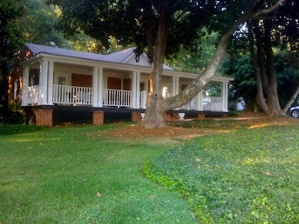 Point #2 above is why we have ceiling fans at all, and I discussed this a bit in my article on the 4 Factors of Comfort. One way that our bodies cool off is by the evaporation of sweat, and air moving over our skin aids that process.

See where I’m going with this? If no one’s skin is under that ceiling fan to feel the air movement, the fan is doing nothing but using electricity to add heat to the house at a time when you want to be cooler, not warmer.

The possibility for saving energy with ceiling fans relies on three practices:

If you do all those things, the most optimistic projections show that you might cut your air conditioning bill by 15%, according to Arnie Katz of Advanced Energy. Then you add back in the energy that you’re using for the ceiling fans, and you start to see how difficult it is to save energy this way.

If you look at how people actually use fans in their homes, you see that they’re not doing those three things above. For one, fans stay on all the time, whether people are in the room or not. Also, Florida Solar Energy Center research showed that thermostat settings are pretty much the same in homes that run ceiling fans and homes that don’t.

Don’t get me wrong. I love ceiling fans. They remind me of my grandparents and their old home with 12′ ceilings and a ceiling fan in every room. Until 1970, they didn’t have air conditioning, so ceiling fans and the whole house fan kept us cool there. And this was in Louisiana, where summer lasts 5 months, with temperatures in the mid-90s and dew points in the mid-70s.

Nowadays, most homes have air conditioning, and Martin Holladay of Green Building Advisor makes a good case that ceiling fans are irrelevant in an air-conditioned home. Also, Katz shows in his article that you’d have a tough time breaking even when installing ceiling fans in a new home. In an existing home, I think the payback on a ceiling fan wouldn’t be very good.

If you have ceiling fans in your home, don’t rip ’em out. Just use them wisely. One thing that can help is if a wall switch is wired into the circuit because it’s easier than using a pull chain. If you really can’t be bothered with switches, and you like the high-tech approach, get occupancy sensors.

Whatever you do, don’t leave those ceiling fans on in all the rooms in your house and tell me you’re doing it to save energy.

What Is a Mini-Split Heat Pump?

The Top Articles in the Energy Vanguard Blog in 2021