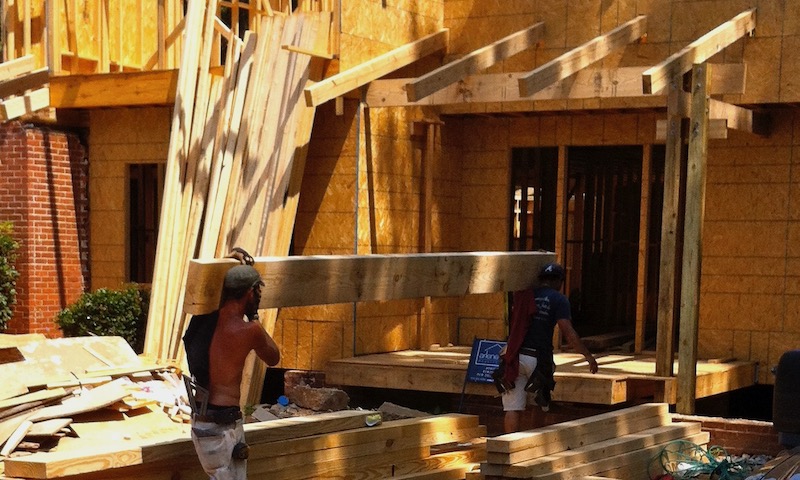 The title of this article refers not to the two framers charging the house with a large timber but to the framing timbers already installed above the porch. Home designers, builders, and framers aren’t used to thinking about the building envelope and thermal bridging. They think more about aesthetics and structure.

If a rafter or beam needs support, the architect or home builder will sometimes cross the building envelope to get it. Those four porch rafters above go right through the sheathing, as you can see in the closeup below. So does the horizontal beam.

The building envelope, briefly, is the boundary between conditioned and unconditioned space. It includes the control layers for heat, air, and moisture, and the insulation and the air barrier are the ones under discussion here.  You’d like them to be as complete and continuous as possible. Those two key components of the building envelope must also be touching each other so that the insulation can do its job.

When you run a sword through the ribs of the building envelope, the home bleeds. Heat can escape through the wound in two ways—air leakage and conduction. Of course, the big gap you see around the penetration will almost certainly get sealed in this Georgia home because we require Blower Door tests now, and home builders are learning that they can’t leave holes unsealed. Will they choose the right materials to keep that hole sealed for the duration of the home’s life, though? It is a big hole.

The other way the house bleeds is that the space where there might have been insulation is now filled with a piece of wood that goes from inside to outside. In the world of building science, we call that a thermal bridge. This may not be as bad as the “architectural pornography” I wrote about recently, with its concrete thermal bridges. And yes, a steel beam would be even worse.

In the photo above, taken in a different home, you can see the beam coming through the sheathing and the extra framing below it for support. So the wound here isn’t just at the penetration. It also includes the extra framing, which is taking the place of insulation and creating another thermal bridge.

Yes, I know it means the house may look a little different, but this is a design issue that we can solve. Those four rafters at the top, for example, could be supported with a ledger board nailed to the outside.

If architects, designers, and home builders start to see the building envelope and understand the importance of maintaining its integrity, then wounds like you see above will start disappearing. Our homes will stop bleeding. So will our wallets.

A Dramatic Illustration of a Compromised Building Envelope