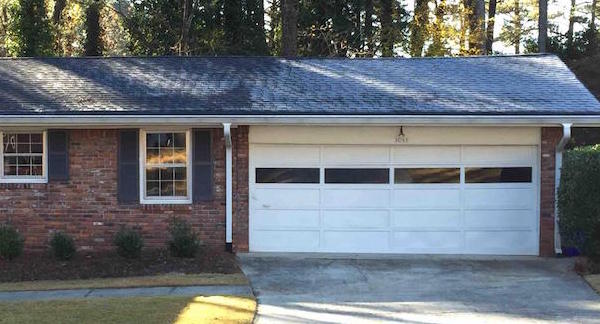 OK, enough of my fake Dickensian prose. Let’s get to the point here. I’ve got two photographs that show the problem with so many homes: ceilings that are porous to heat.

I took the photo above on my walk one chilly December morning. Over the garage, you can see the roof is white. That’s frost. Over the living space, the roof has little smatterings of frost but is largely devoid of the frozen stuff.

Why? Because they were running the heat to keep the house warm. Still, why? Because their ceiling isn’t air-sealed or insulated well enough to keep a lot of heat from escaping into the attic. Once in the attic, it warms the air over the living space. That warm air makes contact with the roof deck and warms it up. That heat then conducts up all the way to the shingles.

And here’s the clincher:  Warm shingles don’t allow frost to form as readily as cold shingles. Whoa! Science is awesome!

Probably not, I say. I haven’t been in this particular attic, but I’ve been in plenty of other attics of houses of this vintage. I’ve never seen a partition wall up there.  [Editor’s note:  I asked the homeowner sometime later, and he told there is indeed a wall in the attic. I was wrong.]

What’s happening is that the rafters keep the warm air from migrating much. Notice, though, that there is some migration. Near the ridge the frost-free area extends over the garage a bit because warm air rises and it ends up near the ridge. Some of it can cross the first rafter there, but it doesn’t seem to make it across the second rafter.

I love this photo! Jason Peavey from PV Heating & Air, an Atlanta home performance company, sent it to me this week. We had some snow from the big storm this past weekend, and like frost, it provides some nice visual feedback about heat loss. Can you tell what’s going on here?

PV got the photo from one of their customers, who asked, “Can you tell which unit is mine?”

As with the photo of the house with the attached garage, this one shows a building with two different heat loss regimes. Over that third unit from the left, there’s little heat getting into the attic, as evidenced by the unmelted snow. Over the other units, enough heat escapes into the attics to melt most of the snow. In cold climates that leads to ice dams.

The difference between this photo and the first is that the garage is unheated so there’s just not much heat available to melt the frost on that side in the first photo. In the second photo, the homeowner is keeping his home warm; he’s just not keeping the attic warm as well.

Some people will tell you that both of these photos prove the need for insulation in the areas where the heat loss to the attic is happening. Not so quick! It could be a simple matter of needing insulation only but most likely these homes also need air sealing. And as you must certainly know (well, you do now anyway), I always tell people, Don’t insulate your attic…until you seal the air leakage pathways.

Two Open Doors to the Attic – A Building Science Nightmare