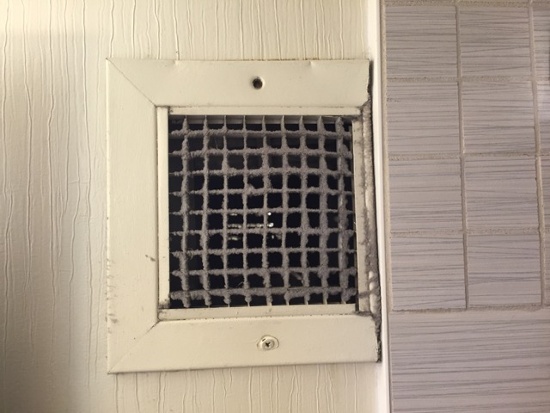 I always look at the bathroom ventilation when I’m staying in hotels. Last month I was at the Air Barrier Association conference in Baltimore and took the photo above. Can you tell anything about what might be happening by looking at it? I didn’t do a thorough investigation, but here’s what I see.

That’s a lot of air flow

Why was the flow so high? Well, it could be a really powerful fan pulling the air in from my room. In this case, I think it was something else. If you look in the middle of the grille, you can see some light. That’s coming through the grille in the adjacent room. Voyeurs and spies love this type of ventilation system. I’m neither. My interest is building science.

Taking the grille off exposes the inside of the bathroom ventilation pathway, or at least part of it. It’s difficult to tell here exactly what they’ve done, but my guess is that the air going into this vent heads for a wall cavity that’s used as a duct. I also suspect that cavity isn’t air sealed.

But let’s go back to the question of high air flow. My room was on the top floor of this building in downtown Baltimore. I believe it was the 25th floor. Exhaust ventilation on a high floor in a building with a lot of air leaks really doesn’t even need a fan when it’s cool enough outdoors.

“Buildings are complex three-dimensional air flow networks driven by complex air pressure relationships.” That’s a quote from Joseph Lstiburek’s doctoral dissertation, and it’s a great way to think about buildings. The driving forces are stack effect, wind, and mechanical systems. The diagram below (from a presentation at last year’s Building Science Summer Camp by Lorne Ricketts) shows the three driving forces and their cumulative effect.

This 3-D network connects different zones inside the building to one another. It also connects the inside of the building to the outside. Buildings like this often have parking garages below, for example. When it’s connected to the occupied spaces in the building, the cumulative air flow pulls nasty air from down there up to where people are exposed to it.

Even in warm weather, this type of bathroom ventilation can be a problem. Hotels in humid places, especially along the Gulf and Atlantic coasts, used to have a lot of problem with musty smelling rooms. Joe Lstiburek, John Tooley, and Don Gatley investigated some of these in Florida a while back and found lots of mold growing under the vinyl wall coverings.

Why were the walls growing mold?

The building drank up as much humid air as it could and then trapped it behind the vinyl wall covering, a Class 1 vapor retarder. The moisture accumulated, the mold grew, and the rooms stank.

Speaking of John Tooley, he was one of the first people to really see the problem of connectedness. He and Neil Moyer wrote a paper back in the late 1980s titled Mechanical Air Distribution and Interacting Relationships, with the great acronym MAD AIR. I’ve written about that paper in an article titled, MAD AIR: Duct Systems, Infiltration, & Their Interactions.

The way bathroom ventilation is done in many hotels certainly demonstrates MAD AIR, and my hotel room in Baltimore was no exception. Take a look at yours next time you’re in a hotel.

Have You Seen What’s in Your Hotel Room Air Conditioner?