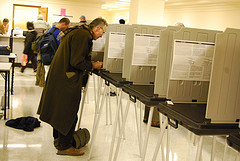 Below is a repost of an article with advice for voters from my friend Chris Kaiser at Mapawatt.

Below is a repost of an article with advice for voters from my friend Chris Kaiser at Mapawatt.

If you are voting in November 2010 and you care about Clean Energy and Conservation there are two things you need to keep in mind: The Issues and The Candidates.

Regarding the issues, there are really only 4 states with ballot initiatives focused on Clean Energy and Conservation.  I compiled this list by combing through the ballot measures for all states that I found at Ballotpedia.org. Even if your state isn’t one of the 4 below, I recommend checking the list for your state.  Some of the measures are important, while others not related to conservation are a bit silly (while SC has no measures promoting conservation, they do have a measure that will increase the importance of hunting and fishing in the state – which may somehow help conservation efforts?) Here are the states with clean energy and conservation issues on the ballot:

Now that you know about some of the issues at each state, who can you vote for to improve clean energy and conservation issues at the national and state level?

In order to help you learn about candidates that support conservation the group Energy Independent Congress has compiled a list of candidates that “have fought and will fight for America to be CLEAN ENERGY INDEPENDENT!”  The list has been compiled with the help of The League of Conservation Voters, The Sierra Club, The National Wildlife Foundation Action Fund and Vote Vets.  The goal, as laid out on their website:

We ask that you vote for ONLY those candidates, Republican and Democratic, who share the vision of CLEAN ENERGY INDEPENDENCE and have the guts to do what is right for our country . . . to create a new, American Energy “Marshall Plan” for a 21st Century America.

We ask you to look past the divisive rhetoric, the billions spent by special interests on dirty campaign ads and VOTE!  We, the People, will elect EVERY member of The House of Representatives and a decisive number of Senators.  We CAN make this a reality . . . with our vote on November 2!

If your state lacks a representative that appears on this list, you can always check out the Senate/Congress clean energy scorecard for your state and district.  You can use the score to help determine if your candidates truly support a clean energy future for the United States.  From the website describing the scorecard:

The 2009 Scorecard covers other key issues, such as public lands, water quantity and quality, forest management, offshore drilling, wildlife conservation at home and abroad, chemical security and population. Going forward, the biggest single step that Congress can take in 2010 is to finish the excellent work started in the House by swiftly passing a comprehensive clean energy and climate bill.

Finally, I highly recommend checking out the post on Huffington Post titled The Voter’s Guide for November 2 by Richard Greene which is focused on issues that would help America become clean energy independent.  The post lays out the reasons for supporting a clean energy future.  And it would seem that almost nobody would disagree, but unfortunately – as one of the commenters on the post pointed out – a large portion of America is fooled into believing that all candidates who support Clean Energy and Conservation just want is higher taxes:

I couldn’t agree more, but you’re preaching to the choir. Whenever a candidate, such as Robin Carnahan (Mapawatt Blog: Senate candidate from Missouri), proposes any tax on fossil fuels in order to promote renewable sources of energy, she gets hit with an ad that goes something like this:

“Robin Carnahan is in favor of job killing energy taxes.”

The folks in Branson or Ozark hear this and say “Can’t vot for her. She wants to raise taxes.”

Until we have $5 gas or long lines at the pumps, how can you get ordinary people to understand how important energy independence is? How can you compete with the millions of dollars the oil and coal industry spends on lobbying congress?

Highlighting this fact is a recent post by Thomas Friedman titled “An X-Ray of Dysfunction” in which he mentions a piece written for the Oct. 11 issue of The New Yorker by Ryan Lizza, explaining how the bipartisan effort by Senators John Kerry (D), Lindsey Graham (R), and Joseph Lieberman (I) to produce an energy-climate bill and enhance clean-tech innovation was killed this year. From the Friedman article (Lizza  describing what happened to Senator Graham when it became clear in his home state of South Carolina that he was supporting a clean energy bill with Democrats):

“Graham was holding a town-hall meeting in the gym of a high school in Greenville, South Carolina. His constituents were not happy. One man accused him of ‘making a pact with the Devil.’ Another shouted, ‘No principled compromise!’ One audience member asked, ‘Why do you think it’s necessary to get in bed with people like John Kerry?’ Graham, dressed in a blue blazer and khakis, paced the floor, explaining that there were only forty Republicans in the Senate, which meant that he had to work with the sixty Democrats. A man in the bleachers shouted, “You’re a traitor, Mr. Graham! You’ve betrayed this nation and you’ve betrayed this state!’ ”

So apparently to some voters in South Carolina, working on both sides of the aisle and supporting Clean Energy in the U.S. means you are a traitor?  This is what is wrong with America today; this extreme polarization that means compromising on good ideas (like Clean Energy) makes you a traitor.  It is for this reason that those of us who believe in a sustainable future for America have to work that much harder to support candidates who also believe in it.

Get out and vote on Tuesday, November 2!

Mapawatt Blog is an online resource for Energy Efficiency and Resource Conservation with the objective to provide readers with educational content that helps them better understand how they are using energy and resources. Through this knowledge, readers will be prepared to apply smart solutions to reduce their energy and resource usage without limiting their lifestyle.