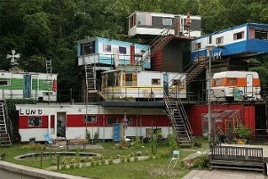 There’s one topic, though, that I think you’ll agree has been noticeably absent. When you discuss people and buildings, it actually takes great discipline to write nearly 100 articles and avoid letting this subject slip into your list of tagged words. That’s right. I’m talking about laughter.

Seriously! Buildings and laughter go together like Abbot and Costello. They’re as intertwined as the words ‘wreak’ and ‘havoc.’ (When have you ever heard of anything besides havoc being wreaked or of havoc coming into existence except by wreaking?) And, as crazy as it sounds, buildings and laughter have been around longer than Brett Favre’s streak in the NFL (and will be around long past the end of Favre’s streak this month).

So, why do people laugh in buildings? Why do we laugh at all? What the heck is laughter? Some say it’s a way to relieve anxiety. Perhaps that was the case with this Dutch TV host:

Had he been at home watching the man with the high-pitched voice be intereviewed by someone else, he might have made a remark or had a little chuckle, and that would’ve been the end of it. As the interviewer himself, though, he couldn’t do that. Laughter was socially forbidden in that situation, which made it all the more irresistible once it arose.

You could tell he didn’t want to laugh, that he knew it was offensive to the guests on the show. Like countless kids in classrooms throughout the history of schools and like the Roman Centurions in Life of Brian, though, he just couldn’t hold it in, despite the effect on the people who spurred it and the consequences he must certainly have paid.

I went through something similar at a silent meditation retreat in 2006. The night before we were to break silence, I was sitting in the dining room having a cup of tea, along with a dozen or so other silent meditators scattered around the room. The retreat had been a powerful, emotional experience for me, and I was feeling quite energetic that evening. As I looked around the dining room, I noticed one of the other meditators sitting over his tea with a big grin on his face.

That was it. I started to lose it. Every time I looked his way, I’d have to stifle a laugh. He also was starting to lose it, and after a little while of the two of us trying to quash the laughing monsters inside us, he got up and hurriedly walked out. The door hadn’t even closed behind him when he erupted in huge guffaws in the courtyard.

So, maybe that’s it. Laughter is our connection to spirituality. It lifts us up to another realm. That’s certainly the message I get from this little film, one of my absolute favorites on YouTube:

Of course, in both of these videos you can see the dark side of laughter. That is, if someone feels that they’re being laughed at, they feel excluded. I’d argue that in the latter video, if the person who got on the train in the middle of the laughing spell felt excluded, he could have gotten past that and joined in the fun. It’s like a good friend of mine so often says, “I’m not laughing at you. I’m laughing near you.”

OK, I don’t really know what laughter is or where it comes from. I know that I like to laugh. I read the New Yorker for the cartoons. For years I subscribed to the Funny Times and laughed my head off for hours on the day it arrived in my mailbox. People have even told me about my nocturnal laughing tendencies, which I’m occasionally aware of myself, as I wake up laughing from a funny dream.

In the end, though, it’s really all about buildings. It has to be, you know, because more than 90% of all laughter occurs in buildings (just as 81% of all statistics are made up on the spot) and because buildings are what I write about.

This is another article in the Let’s Blog Off sensation, and my second contribution.