A water resistive barrier (WRB) provides protection against water damage for water that gets behind the cladding of a building. But what if it doesn't really resist water? I've written a lot about installation problems that can lead to compromised water resistance. (See the article I wrote last week, for example.) But other factors can make them leaky, too. Too much exposure to ultraviolet (UV) light is one of them.

At the Air Barrier Association of America conference in Baltimore last month, I attended a presentation by Marcus Jablonka of Cosella-Dörken. They've done a study of UV exposure to different WRBs, and the results should be of great concern to all builders, architects, and product specifiers. This is a preliminary study and there are still a lot of questions to be answered, but I'd be concerned if I were a builder.

As mentioned above, the WRB's purpose is to allow water that gets behind the cladding to drain down and be removed from the building. They come in different flavors and have a variety of properties. First, you can get your WRB as a material that is:

Some properties are more important than others. Building enclosure control freaks understand that you need to control the flows of heat, air, and moisture to have a building that functions well. Controlling heat is typically not done by WRBs (although it can be), so let's focus on liquid water, air, and water vapor.

No matter which WRB type you choose, you want it to have a high water resistance. Yes, I really said that. As obvious as it seems, sometimes it's good to state — and question — the obvious. Without water resistance, a WRB has no WR so it's not a B.

Some WRBs also have good air resistance, which means they can be part of your air barrier system. If you can do both jobs with the same material, so much the better.

Finally, we know now that it's typically more important for buildings to have good drying potential than it is to put in materials with a low vapor permeance. Vapor retarders, especially Class 1 vapor retarders with a permeance of 0.1 or less, can reduce the drying potential and cause problems. Yes, you can design a building assembly to work with vapor impermeable materials, but if you're using WRBs without exterior insulation, it's best to go with vapor permeable materials.

Does your WRB get sunburned?

Exposure to ultraviolet light happens on jobsites. Once you get the WRB installed, it's sitting out there exposed to sunlight. Even on cloudy days, it gets UV exposure. (Ever gotten a sunburn on a cloudy day? I have.) The longer it sits there, the more it gets. But it also varies by location. Miami and Phoenix get a lot more than Seattle or Toronto. And it varies by time of year. Leaving a WRB exposed in winter won't be as bad as leaving it out in summer.

In his presentation, Jablonka showed the results of UV exposure to self-adhered (peel-and-stick) WRBs and mechanically fastened WRBs. They took the different types of WRBs and did accelerating aging studies with UV lamps. They tested them for strength, elongation, and water resistance at three stages: before UV exposure, after 500 hours, and after 1,000 hours.

Here are the descriptions of the five self-adhered WRBs they tested. 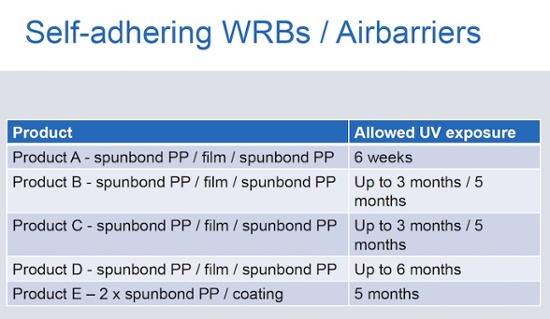 And here are the results for water resistance after the UV exposure: 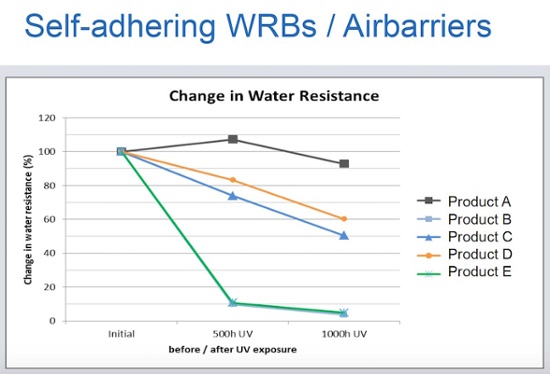 That should be of concern to builders who use self-adhered WRBs. Two of the ones they tested (B and E) lost over 90% of their water resistance. Even at the intermediate stage of 500 hours, they'd already lost 90%.

What about the mechanically-fastened WRBs? They studied six products in that category, as described below. 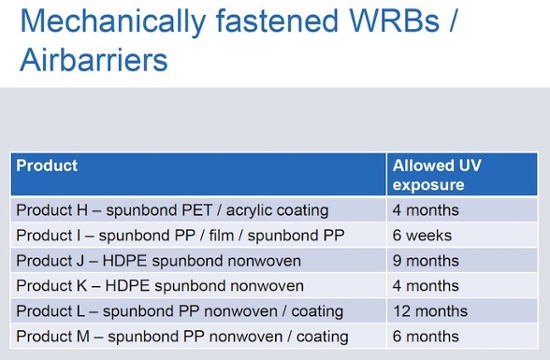 And here's what happened to the water resistance: 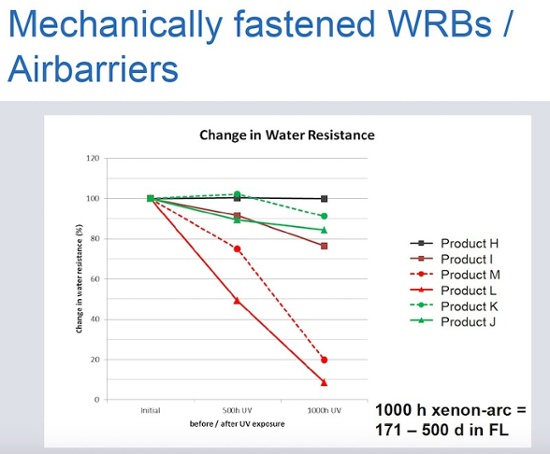 Again, the results show significant degradation of one of the most important properties of WRBs. If I'm a builder, I don't want a WRB that's going to lose most of its ability to resist water.

Your WRB is showing

There probably aren't many projects that leave the WRB exposed for two years. Three months, though, does happen occasionally. If you were using product B or E of the peel-and-sticks or product L of the mechanically-fastened, even at the 500 hour stage, the water resistance is down 90% for the former and 50% for the latter. So how much would it be down after one month? Two months?

Also, note that products B and E are labeled as having allowable exposures of 5 months, and the manufacturer of product L says you can leave it exposed for up to 12 months. After seeing these data, I wouldn't be willing to take that risk.

This study raises some questions. If some products do so poorly in an accelerated aging study, will they show similar degradation under normal conditions? How long can you safely leave a WRB exposed? Although there are standards for water resistance, strength, and other WRB properties, there's not any required testing for allowable UV exposure.

It's too early to say how much of a problem UV exposure might be to the water resistance of WRBs in the real world. More research, especially with sun exposure on products left exposed outdoors for various amounts of time, can shed some light on this.

The best thing builders can do to prevent problems from UV exposure is to get the WRB covered up as soon as you can. As you can see in the data above, even being left exposed for three months in Miami can cause a big drop in water resistance of some products. Just because some manufacturers claim their WRBs can be left exposed for 3 months or 5 months or 12 months doesn't make it true.

Jablonka has made his results available to anyone who wants to see more of the details. Click below to download the full set of slides and the paper:

Photo of house by Energy Vanguard. Tables and graphs from Marcus Jablonka's presentation, used with permission.

The first fifteen years of my company's business was in remodeling/repairs. We did more than our fair share of repairs to exteriors (and interiors) due to failures of these barriers. Most all were due to improper installation and damage from other trades.

Part of the problem (IMHO) lies with which crew installs the barrier. To get the house weathered-in, this task usually falls to the framing crew. It along with the windows and doors is the last thing the crew does before moving on to the next job. The experienced framers hate this part and may even move on while leaving this "lower skilled" task to newer members. Often they have not been adequately training to understand how important this task is to the life of the building. This is where the problem starts.

I have seen inside corners literally ripped out by siding crews because the wrap did not fit tightly into the corners and inside corner boards could not be installed properly. A few years later and I am in there replacing rotted sheathing and support LVLs.

My preference is for a separate crew that specializes in drying-in along with the windows and doors. This could be the siding and trim crew as well. Sadly too few of these crews are around and in business.

The loss of water resistance in WRB's due to UV exposure is, in my opinion much less of a concern than the improperly chosen WRB material and its application into a rain screen system. I would be curious to know what the UV compromised WRB actually looked like in these tests. In the real world when I have encountered failed WRBs I am never 100% sure whether it may have been solely the result of improper rain screen installation or UV degradation or maybe both. It's pretty obvious when the problem is the result of improperly chosen WRB material and missing WRB altogether.
Also
The charted results shown of the effects of UV exposure to water resistance is a bit interesting for both the mechanically applied and self adhering WRBs. I see that there is an increase in water resistance above 100% initially in some materials.
How could this be?
Bottom line, conscientious builders will minimize the UV exposure of their properly located and applied WRB material.

I would be interested to see how good old 15 lb felt would stand up next to the other products. Or am I missing something?

Felt dries out, gets torn, and smells bad in my experience

Inquiring minds want to know - brands/products. Without the brand/product info, this is just scare tactics by C-D. No real guidance on what to avoid or protect if used. Also would be good to see how the liquid-applied WRBs faired, and the "green OSB" system.

Dale, I've remodeled some older homes that the felt looks just like it did the day it was applied (in Seattle). I think just like described above, the installer has a lot to do with how it functions.
Of course this is not a discussion about the merits of felt, I just wanted to see if the test had a base line to judge from. Felt would have been a good base line.

Great test, obviously it leads to other questions and more testing. And with David Eakin, I'd love to see liquid-applied WRBs tested. From the very little I've seen, the liquid-applied will win this contest.

The data is interesting, but the graph labels are...confusing. If something remains unchanged, shouldn't it be 0% change, not 100%? Maybe it's me...

The third table states the correlation between accelerated UV exposure and "real world" exposure. I am curious as to the basis of this correlation. Does this come from another study or stated standard?

If you download the paper that I linked to at the end of the article, you'll see this on page 7:

"Beaumier [12] established a relation between the UV index and the irradiance of accelerated aging using Xenon-Arc lamp, according to ASTM G155, cycle 3 [23]."

UV is one aspect but 'blowing in the breeze' is another. The longer house wraps are exposed to UV the more likely they are to be damaged and torn. This coupled with the idea that house wraps are also are expected to act as flashings (details show window flashing terminating on the house wrap) leads to future problems.

So even when WRB-covered walls get quickly clad with siding, is there any continued danger of UV deterioration when siding is not continuous, but panels / boards with open joints? Those gaps are narrow but would still expose WRB to periodic sunlight - continuously through the life of the building? Curious what the experts think about this matter!

Great question, Dennis. WRB manufacturers make special versions of their products for open-joint cladding of the type you describe. If you download the articles, you'll find that the authors of this study looked at that type as well, although I didn't discuss that part in my article.