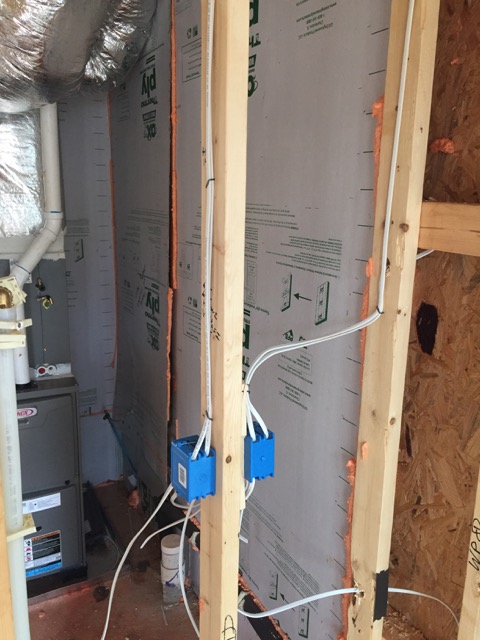 There’s a ton of new construction and remodeling going on in Atlanta. On a lot near where I live, a developer tore down the old house and is building two new ones. This weekend, I took the opportunity to check out their progress on the first one and saw the mechanical system roughed in on the first floor. They did some good things in their attempt to keep the air handler and ducts inside conditioned space. They also did some not-so-good things. Let’s grade their work.

As you can see in the lead photo above, they insulated the walls and covered them with a layer of interior sheathing before they installed the equipment.  They also sealed the edges with spray foam. I gave them an A- instead of an A because there’s one place where the T-Ply is coming apart. I assume they’ll fix that.

The duct system here is radial rather than trunk and branch. It’s all flex duct. Because of the constraints, the flex doesn’t meet the Air Diffusion Council’s standards for flex duct installation. Notice the mess of ducts coming up out of the mechanical closet. Notice the turns and the squishing. With a trunk and branch duct system, they would have installed only a few ducts, ideally hardpipe rather than flex, coming up out of the closet.

Oops! It looks like that attic above the mechanical closet is meant to be insulated at the drywall ceiling, not the roofline. That means those ducts will travel a bit through unconditioned attic space. A couple of the ducts also go out into the attic over the porch, as you can see below. Also, because of all the ducts in that little attic space, they’re going to have a heck of a time insulating it properly.

They’re not the worst turns I’ve seen, but they did make every turn in the flex duct using the flex itself. That adds much more resistance than installing rigid metal elbows to turn the air. And there are a lot of turns, especially in the duct that has to go around the stairs (above).

Flex duct comes in 25′ lengths. When you run 50′ of flex, you’ve got to connect pieces together. They did use rigid metal connectors at the two joints I checked out. But I can’t give them higher than a C here because if they had used metal elbows at the turns, they wouldn’t have needed any butt joints in the straight sections. Even better, if they had gone with a trunk and branch system, they wouldn’t have needed any butt joints.

The best way to get ducts inside conditioned space

So, in this home they got the air handler in conditioned space. They got the ducts mostly in conditioned space. And they had to make a lot of compromises. I don’t blame the HVAC contractor here. No, the real problems in this home go back to the design phase. The architect who drew that mechanical closet should also have considered how the ducts would get to the different rooms on the first floor.

If you’re going to put an air handler and ducts inside conditioned space for a first floor system like this, here are a few tips:

With a first floor system inside conditioned space, it’s important to get it right upfront. This isn’t like a system in an attic or crawl space. The ducts will be buried behind drywall when the house is finished. Good, integrated design is the way to go.

Need help with your HVAC design? We do that.