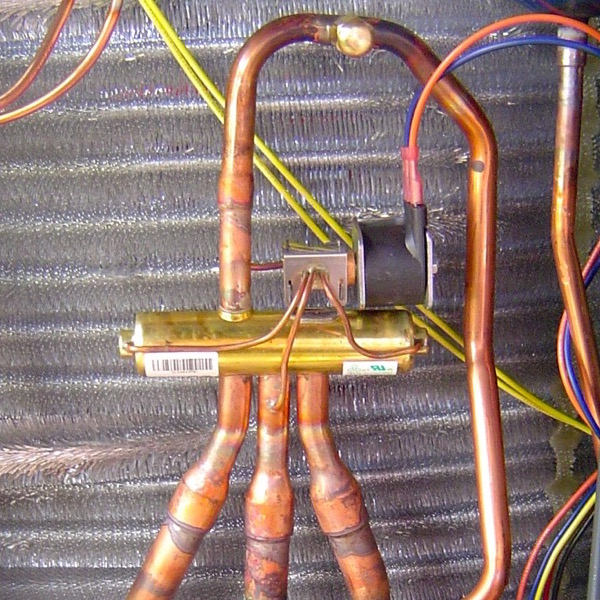 So we’ve looked at a simple way to estimate the heat pump balance point.  If you also read the comments of that article, you should be aware that there’s more to the actual balance point than what I wrote in the article.  Today, though, let’s look at two factors that can affect the balance point.

First, recall that the simple method to find the balance point involved plotting the heating load of the house and heat pump capacity on the same graph.  Using two data points for each and assuming a linear relationship between load/capacity and outdoor temperature, we had two straight lines.  The temperature where they cross is the heat pump balance point.  It tells you at what temperature the heat pump is just able to keep the house at the indoor design temperature (normally 70 °F).

The effect of equipment size on balance point

In that last article, I used an example from a load calculation we did for a home in New Jersey.  The heat pump balance point, using the method described, was 25 °F.  The load at the design temperature was about 15,000 BTU/hr and the heat pump used in the example was one that’s nominally rated at 18,000 BTU/hr.  So to change where the two lines intersect, we can change either line, the load or the capacity.  Let’s start with the capacity.

The graph below shows how to find it. The orange line here is identical to the one in the previous graph.  We haven’t done anything to change the heating load.  The blue line, however, has moved up as the capacity is higher at both of the temperatures we’re using.

For this setup, the heat pump can provide all the heat needs down to and even a little below the design temperature.  To find the balance point, we have to extrapolate the two lines to find the intersection, which is at about 15 °F.

The effect of heating load on balance point

Likewise, we could change the other part of the graph, the heating load, to change the balance point.  If you have an existing home and want make it more comfortable and energy efficient by doing some air sealing and insulating, the house won’t need as much heat.  The house in our example initially had a heating load of about 15,000 BTU/hr.  Let’s say we add some insulation, make it more airtight, and seal the ducts.  Now the load drops to about 10,000 BTU/hr, and we use that as our design temperature heating load point on the graph.

But wait!  There’s more.  In the last article, I assumed that zero load happens at 65 °F.  In many homes it may well be lower, especially if the home is airtight and well insulated.  In such a home, the load could easily be zero at 55 °F.  That means the heat doesn’t come on until the outdoor temperature is 55 °F. The blue line is the capacity of the 1.5 ton heat pump, same as in the first graph, the one in the other article.  But now the orange line is lower, and the two intersect at 17 °F now instead of 25 °F.  So we’ve dropped the balance point 8 °F by making the home more efficient.

This home now has a balance point right at the design temperature.  That means it doesn’t need any supplemental heat.

The downside of lowering the balance point

Lowering the balance point is great for heating.  If that were the only consideration, we could make the house as efficient as possible and then put in a heat pump big enough to ensure the balance point is below the design temperature.  The problem, however, is that oversizing can have a deleterious effect on cooling, especially in humid climates.  You need equipment sized close to the cooling load to get good dehumidification.  Even in a dry climate, oversizing affects comfort negatively because the system comes on and goes off more frequently (short-cycling).

Normally, when you make the house more efficient and have a lower heating load, as in the last section, you also put in a smaller heating system.  For conventional fixed-capacity equipment, of course, the smallest heat pump you’ll find is 1.5 ton.  So in that example, we’ve already got the smallest heat pump of that type and can’t go smaller.  As a result, the system will short-cycle most of the time.

Now the heat pump balance point is demystified a bit more for you, I hope.  Of course, there’s also the issue of what the actual balance point is and what kind of equipment you can use to get a low balance point and not have short-cycling.  But those are topics for another time…because I need to go watch this video of a panda rolling in the snow.

The 3 Types of Heat From Heat Pumps