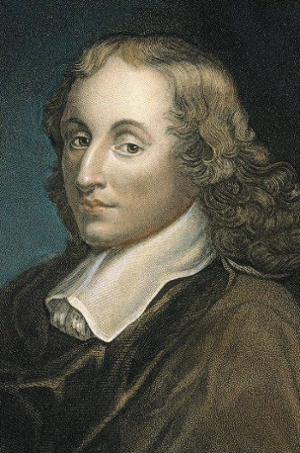 Remember the first time you ran a blower door? OK, maybe that’s not the best way to get where I’m going because most first-timers turn the pressure up like they’re practicing tai chi on Jupiter. After you’ve done a few tests, though, you learn to crank it up to 50 Pascals of pressure difference in just a few seconds. And that’s where you may have discovered the mystery that Blaise Pascal solved nearly 4 centuries ago when he invented the hydraulic press.

Remember the first time you ran a blower door? OK, maybe that’s not the best way to get where I’m going because most first-timers turn the pressure up like they’re practicing tai chi on Jupiter. After you’ve done a few tests, though, you learn to crank it up to 50 Pascals of pressure difference in just a few seconds. And that’s where you may have discovered the mystery that Blaise Pascal solved nearly 4 centuries ago when he invented the hydraulic press.

When you run a blower door and move air from indoors to outdoors, you’re decreasing the air pressure inside the house. At least you know that’s true right by the fan because that’s where you set up the manometer to measure the pressure difference. If you’ve done any blower door testing, you may have wondered if the pressure is really the same in other parts of the house and how long it takes for the pressure in the farthest reaches of the house to drop to the same level.

Of course, you could always do the experiment. Set up your blower door as usual on one side of the house. Set up a second manometer on the far side of the house with a way to see the results right there at the blower door. You could even use data loggers to record the blow-by-blow if you were so inclined. The solution lies in understanding how a hydraulic jack works.

How a hydraulic jack works

If you’ve ever raised your car with a hydraulic jack, you probably noticed how easy it was to lift a lot of weight. That’s because the jack multiplies your force. The diagram below illustrates how it works. You push down on Piston A and it moves a relatively large distance with a relatively small force. The physics of fluids allows you to trade off those two quantities. 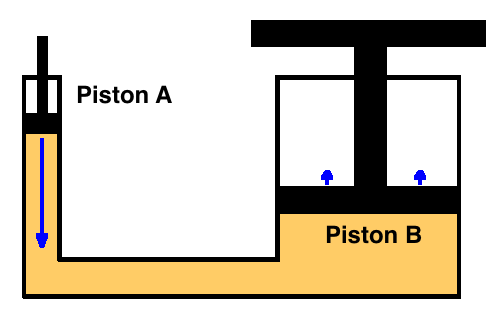 On the other side, Piston B rises only a small distance but does so with great force. The amount of work done, force times distance, is the same on each side, though. It works just like a lever, but with a fluid instead of a stick. This is where our friend Monsieur Pascal comes in. He discovered what is now called Pascal’s Principle:

A change in pressure at any point in an enclosed fluid at rest is transmitted undiminished to all points in the fluid.

The hydraulic jack works because when you press down on Piston A, you increase the pressure in the fluid under the piston. That pressure is then transmitted right across to Piston B. And it happens right away because that pressure wave transmits to the other side at the speed of sound. It is a sound wave, in a sense, since both are pressure waves.

So when you turn on the blower door, Pascal’s Principle guarantees† that the pressure you measure at the blower door will be the same as the pressure on the other side of the house. And it happens almost immediately…unless you have an unusually long house. If your house were, say, a mile long, it would take about 5 seconds for the pressure to equilibrate.

Pascal’s birthday was last week, on 19 June. Although he didn’t make it even to 40 years old, he accomplished a lot in his short time here. In addition to discovering Pascal’s Principle, he invented the hydraulic press and the syringe. He was one of the few who rejected the Aristotelian notion that a vacuum couldn’t exist, contradicting luminaries like René Descartes. He also helped advance the development of the scientific method by writing that falsifiability is a distinguishing feature of scientific theories. And then there’s every high school algebra student’s favorite Pascalism: Pascal’s Triangle.

† OK, “guarantees” is a strong word. Strictly speaking, Pascal’s Principle applies to incompressible fluids that are completely enclosed. Air is compressible, but the pressures we’re working with in a blower door test don’t do much compressing. Also, houses aren’t airtight, so the leakier they are, the more pressure variation you’ll find, especially when you’re close to the leaks.