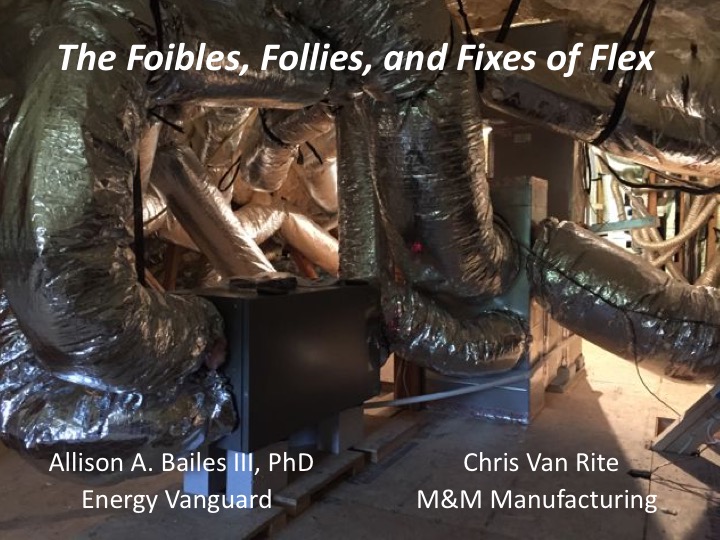 One week ago I spoke at the Westford Symposium on Building Science. You may know it better as Building Science Summer Camp, since that’s what everyone calls it. I wrote up a little summary of the whole conference last week but didn’t say a lot about my presentation. Today I’ll fill you in on what you missed if you weren’t there.

I gave this presentation with Chris Van Rite, who works for M&M Manufacturing in the Dallas area. We had given a presentation together (along with Robert Bean) at the beginning of this year at the ASHRAE conference in Las Vegas, so he got us on the Summer Camp program to discuss flex duct. He travels around Texas teaching contractors about duct systems and air flow and was on the ASHRAE committee that developed the new duct calculator showing the results for flex duct not pulled tight.

This was the first time I’ve spoken at Summer Camp so I was a bit nervous. Before my talk I kept asking people if they’d take my place. One person even considered it seriously. When the time finally came for us to go up in front of 450 really smart people, I calmed down a bit. After Joe Lstiburek introduced us, I spoke first, then Chris spoke, and at the end, I came back to wrap things up. Here’s the video of my introduction. (Thanks to Joe Medosch for setting up his GoPro in the front row! Next time I should use a mic with the video.)

There it is. You got all my best flex duct jokes now. (A couple of those are from my friend Mike MacFarland.)

After the intro, I got serious and jumped into the air flow issues with ducts. Pretty much everything in my talk is something I’ve written about here, so I’ll point you to the appropriate articles. I began with the two causes of reduced air flow in ducts: friction and turbulence.

I showed one graph (below) from the Texas A&M research on pressure drops in flex versus sheet metal ducts. What the data show is that if you pull the inner liner of flex duct perfectly tight, flex performs the same as rigid sheet metal ducts. That’s not just three sets of data below; it’s six. Flex and sheet metal pressure drops for 6″, 8″, and 10″ ducts. They’re the same, which means you can size flex the same as rigid…IF you pull it perfectly tight. Then I got into the Manual D duct design process, which is all stuff that’s in my duct design series here in the blog. I briefly discussed available static pressure, total effective length, and friction rate. I concluded that the pressure drops of fittings dominate the process…unless you install flex like I showed in some of those photos in my introduction. Then we really don’t know what’s happening, but we do know that you’re choking off the air flow. Every turn and every piece of flex not pulled tight results in pressure drops. How many places do you see in the photo above where you might have a problem? (Thanks to Thomas Battoe for this a-maze-ing photo!)

At that point, I yielded the floor to Chris and he spoke more about that Texas A&M research on pressure drops. He also mentioned the Air Duct Council (a trade association for flex duct) and their guide called Flexible Duct Performance & Installation Standards. (Yes, I’ve written about that, too.)

Is rigid duct the answer?

Well, maybe. In our third part HVAC design here at Energy Vanguard, we design a lot of systems that use rigid duct for the trunk lines and flex for the branches. That’s not one of ours below, but it’s the same concept. But as with just about everything, it’s not the product or the material that matters. I’ve got some fun photos of rigid duct systems, too. I have no idea what the designers/installers were thinking when they created this thing you see below. Flex duct systems can work great. And they really are way better for noise control than rigid duct. You just have to design and install it properly. Some people can do that, like my friends in California. Here’s a beautiful flex duct system done by Mike MacFarland and his company Energy Docs. I also showed some work done by Gavin Healy and Dan Perunko of Balance Point Home Performance and by a Habitat for Humanity affiliate in Alabama that former Energy Vanguard employee Andy Bell worked on.  Based on what I’ve seen, flex duct works best when you follow these two rules:

And there you have it. Based on the comments and discussions I had with people after the talk, I think we stirred things up a bit. Maybe it’ll even help bring about a little bit of change.