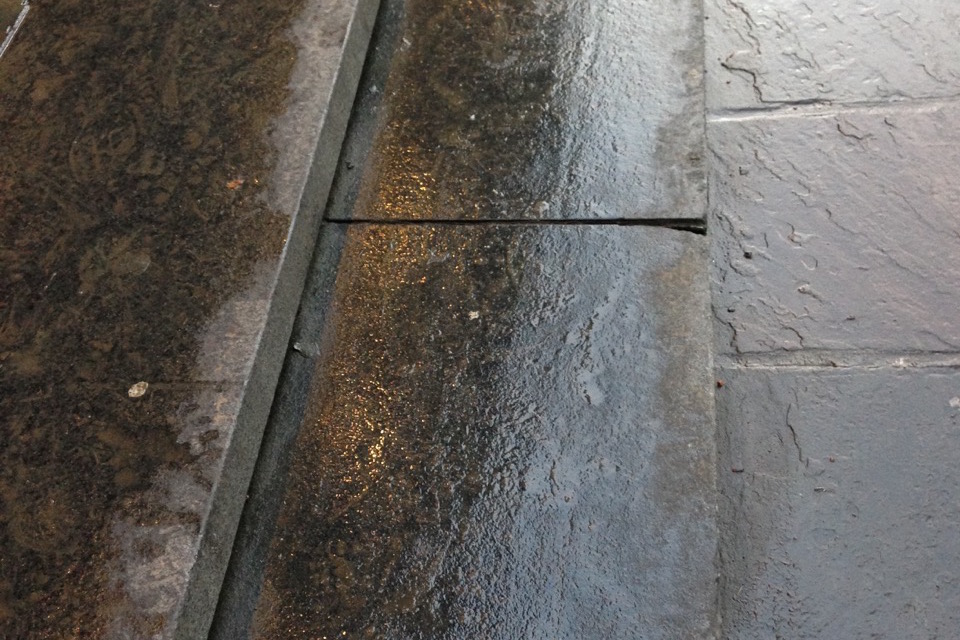 If you live anywhere in a warm, humid coastal area, you’re no doubt familiar with wet concrete in winter. Some days you walk outside and find the carport slab is soaking wet. How did it happen? Did rain blow into the carport? If it’s not rain, is it moisture from the ground that came up through the concrete? Could it be condensation from the water vapor in the air? Let’s take a look.

I took the photo above on a February day in New Orleans a few years ago and it perfectly demonstrates the physics of this phenomenon. What you’re looking at are the stone steps and pavers near Jackson Square. They were mostly wet but the water didn’t get there from rain or any other liquid water source above the stone.

Could the water have come from below? The photo above doesn’t eliminate that possibility. Notice the nose of the steps. That part of the stone was dry. It wasn’t directly in contact with the ground, having a bit of air beneath, so maybe the water did come from below.

But no, that’s not the answer either. Here’s another photo taken nearby at about the same time. The sidewalk and steps were completely dry. The critical difference between the two locations was shade. The dry area was open to the sky. That kept the stone warmer than the other stone, which was under tree cover.

Let’s go back at the lead photo. The stone there was wet because of condensation. The nose of the steps was dry because it was warmer. That part of the stone had air on three sides. That warmed it up enough that it could be above the dew point.

When does this happen? I’ve spent many years of my life in Houston, south Louisiana, and Florida, so I’m familiar with this condition. It happens in winter, after there’s been a cold snap. A cold front comes through and chills the ground, the sidewalks, and the concrete slabs. Then it moves out, being replaced by a mass of warm, humid air. The air temperature rises into the 60s or 70s Fahrenheit, maybe even 80° F.

The dew point of the water vapor in that air can be 70° F or higher. When it finds that cold concrete or stone in contact with the ground, you get condensation. It’s possible to see condensation on open areas but you’ll more often see it on shaded surfaces because those areas stay cool longer.

When you can look at something like that and figure out what’s going on, you can figure out all kinds of moisture problems that occur in buildings, too.