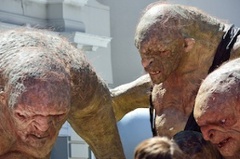 A year or two ago, I remember getting trapped in my car one evening listening to Ira Glass’s show This American Life. It was an episode titled When Patents Attack, and I was riveted. They described how a seemingly small change in the US patent office’s protocol led to the growth of an industry that siphons money from tech companies through legal, but sketchy, license fees and lawsuits. It seems that some in our industry were paying attention to Nathan Myhrvold’s shenanigans and are now going after home inspectors and energy auditors.

A year or two ago, I remember getting trapped in my car one evening listening to Ira Glass’s show This American Life. It was an episode titled When Patents Attack, and I was riveted. They described how a seemingly small change in the US patent office’s protocol led to the growth of an industry that siphons money from tech companies through legal, but sketchy, license fees and lawsuits. It seems that some in our industry were paying attention to Nathan Myhrvold’s shenanigans and are now going after home inspectors and energy auditors.

HomeSafe Inspection, a Mississippi company that has several patents covering various uses of infrared cameras, filed a lawsuit against Assured Home Inspections of Tupelo, Mississippi, and its owner, Charles Russell. Their claim is that the defendant has willfully and deliberately infringed on three of their patents (patent numbers 7,445,377 B2; 7,434,990 B2; and 7,369,955 B2).

They’ve asked the court to:

You can download and read a copy of the lawsuit yourself. The lawsuit itself is only five pages, followed by the full text of the three patents cited.

Last Wednesday brought an interesting new development to this case, a development that likely will only make things worse for home inspectors and energy auditors. Before we get into that, though, let’s take a look at the substance of their patents.

The slippery slope of what qualifies for a patent

One of the things I learned in that episode of This American Life was that for a long time, the patent office resisted awarding patents to computer programs, in whole or part. Then they changed course in the 1990s. If someone figured out how to write a piece of code that did something like open a dialog box whenever you pop a CD into the drive, the patent office decided that piece of code deserved a patent.

I’m no expert on patent law or history, but it seems that patents used to go for inventions of real things, like light bulbs and carburetors. Patents could be awarded for processes, too, but those were industrial processes that led to real stuff you could touch, like Goodyear’s patent for vulcanizing rubber. They weren’t for obvious things like how to sell more apples from your cart.

What did HomeSafe claim to have invented in the three patents cited in the lawsuit? First, here are the titles along with the last three digits of their seven digit patent numbers, as HomeSafe abbreviated them in its lawsuit:

990: Additional Methods to Detect Termite Infestation in a Structure

You can find the full text of all their patents online (just google ‘patent number xxxxxxx’), but let’s take a look at the details of the first one, 377. Here’s the abstract:

If you read through the entire patent, you’ll find that the apparatus referred to in the abstract is a harness for mounting an infrared camera along with a digital video camera (Fig. 2 below). They connect the two cameras with a cable to feed the IR signal to the digital video camera, but there’s nothing special about that connection. They don’t describe any proprietary technology or processes that make something possible that had never been done before. The reason for that lack of detail is that cameras that combined those functions already existed when they filed for their patent. That’s why they included another version of the apparatus (Fig. 3 below) that held only one camera. So the apparatus is simply a harness to mount cameras on, something that any handy person could build in their garage. HomeSafe hasn’t proposed any modifications to the infrared and digital video cameras themselves, and even the method of connecting them isn’t new. They just built a harness to allow home inspectors to walk around and keep their cameras steady.

Well then, what about their “various methods for using a thermal imaging apparatus”? Is there anything new and exciting to their methods? I’ve read through their whole patent number 377, and I couldn’t find anything that didn’t seem to be common knowledge in the thermal imaging industry.

The method they’ve obtained a patent for includes:

The bulk of the text in the patent reads like a poorly written instruction manual for thermal imaging.

HomeSafe applied for its patents around 2004 and got them in 2008, as I understand the timeline. It seems, though that they began harrassing home inspectors before the patents were awarded. A recent notice from the American Society of Home Inspectors (ASHI) appeared on The Inspector’s Journal Online (see comment #19 by Kurt for full text) and gives a bit of background:

Around 2005 or 2006 HomeSafe began sending letters to home inspectors and energy auditors who use infrared cameras in evaluating homes, threatening legal action for patent infringement. HomeSafe claims, “It is impossible to perform a complete and accurate inspection or even a partial inspection with an infrared camera without utilizing HomeSafe’s patented methods and infringing.”

Additionally they allege, “If you are using an infrared camera to detect anomalies in a home related to indoor air quality, energy loss, moisture intrusion and electrical hazards among others, you are violating HomeSafe’s patents.”

After the early activity, HomeSafe dropped out of sight for a while. My guess is that they ran into more resistance than they expected and stepped back to make sure they had a solid legal strategy. Evidently, they believe they’re ready now.

What actually happened last Wednesday, 28 August, to make things worse? First, the good news: Mr. Russell doesn’t have to go to court. The bad news, though, according to the discussion at The Inspector’s Journal Online, is that Nick Gromicko, founder of International Association of Certified Home Inspectors (InterNACHI), paid HomeSafe a settlement to drop the lawsuit.

The ASHI notice put it this way:

In the meantime, the owner of the defendant’s home inspection association stepped in, before the court date for the defendant response on August 28, and offered to pay HomeSafe a cash settlement to drop the suit. While it might have been intended as a generous gesture, this offer and acceptance of cash provides HomeSafe a quick win and additional funds to file more legal action. This ill-advised payment to HomeSafe will further embolden them to pursue their legal strategy. In the end, while certainly a godsend for the inspector involved, this can mean more threats and more suits by HomeSafe against home inspectors.

I know the standard advice is to settle in these cases because patent holders have the law on their side. A friend of mine who’s a lawyer said his former company settled with the person who claims to have the patent for inventing “Press 1 for customer service. Press 2 to access your account…” Microsoft, AT&T, Sprint, and ConEd also settled, according to my friend.

Still, home inspectors and energy auditors mostly aren’t making a whole lot of money, so HomeSafe is essentially trying to squeeze blood from a turnip. It seems to me that they’re more likely to kill the whole residential thermal imaging business than to make enough money even to pay off their lawyers.

Who will HomeSafe attack next?

Surely HomeSafe must have its sights set on bigger game. I’m wondering if Fluke, Flir, and Testo, three of the big infrared camera makers, are their real target. Perhaps they’re going after the home inspectors and energy auditors first as a shot across the bow so the big companies with deep pockets will pony up some cash just to keep the market from dying.

I’m also wondering what the camera makers’ strategies are on this issue. They can’t ignore it any longer. Flir is the only one I’m aware of that has addressed the issue publicly. In a letter addressed to “Dear Valued Customer” dated 16 January 2009, they wrote that a person would have to carry out each part of the claims in a patent to be liable for infringement. They advised that, “Failure to practice even one feature allows a person to avoid infringement.” They closed the letter, however, with a paragraph warning that, “This letter should not be construed as legal advice.”

And then there are all the training organizations. Surely this has their attention. They’re teaching processes that are now covered by HomeSafe’s patents. For several of them, teaching how to use infrared cameras is all they do, so this puts them in a bad way.

Because of weakness in our patent laws and an underfunded patent office, a few people are siphoning a lot of money off the hard work of others. There’s some rumbling occuring in the tech industry about patent reform. The FTC is planning to investigate patent trolls. Also, Carbonite won a battle against a patent troll. People are getting fed up. John Poole of Birmingham Point shared the image below from the Application Developers Alliance with me on Facebook yesterday. As a writer and educator, I’m all for protecting intellectual property. If someone creates something new, they should be able to claim their creation and profit from it. But the idea that someone can snap up a patent on something that people have been doing for decades is disturbing.

Apparently the formula for this easy money is easy to execute: Find a process that a lot of people are already making money from and patent it. In the forums discussing the HomeSafe issue, a few people have thrown out their ideas for patents:

Clearly, those ideas are preposterous. No one could ever get away with patenting them. Could they?

Here I go again, putting myself out there, criticizing another company that could come after me, too, just for speaking out. Was I libelous for mentioning patent trolls and HomeSafe in the same article? Did I “willfully and deliberately” harm their licensing business by speaking out against their patent? Did I misinterpret something in their patent?

We’ll see what happens. It all worked out fine a couple of years ago when a much larger company came after me, though, so I think I’ll be OK.

Also, I have to tip my hat to David Butler, who brought this issue to my attention this past Labor Day weekend when he posted a discussion about it on LinkedIn. He gave a good summary of what has happened and included links to several of the places I quoted from and linked to above. Thanks, David!

And one final word: Please share this article far and wide. HomeSafe Inspection’s actions represent a threat not only to the home inspection and energy audit industry but also to any industry where someone could take a common technical process, write up a patent application in a way that the reviewers get snowed, and then let their lawyers start collecting the money.

For example, what if someone patented a process for commissioning HVAC systems? Or a particular remodeling technique like finishing an attic? Or a piece of computer code integral to energy modeling? I don’t think we’ve seen the end of this.

Photo of trolls by kewl from flickr.com, used under a Creative Commons license.