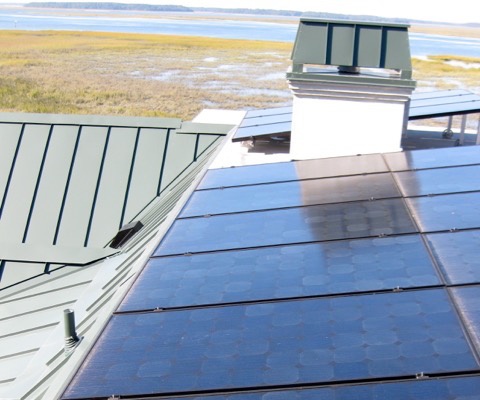 Supply and demand are two different things. When you think of an energy code, say the International Energy Conservation Code (IECC), you probably think of demand, not supply. Conserving energy, after all, means reducing demand. It’s related to supply only indirectly. As a result, you might expect an energy conservation code to have requirements that affect only the demand side of the equation. With the 2015 IECC, however, that’s not true anymore.

The 2015 IECC introduced a new pathway to compliance: the Energy Rating Index (ERI). It’s defined in a way that makes it pretty much the same as HERS Index, so home energy raters can help builders get their homes to comply. But there’s an important new element introduced into the IECC with the ERI path.

This index has a reference of 100 for a home designed to meet the 2006 IECC. Lower numbers are better. A home that just meets the 2009 IECC, for example, would come in at an index of about 85 or 90. The 2012 IECC drops that into the 70s. If you make the house as efficient as possible by building a Passive House, you’ll get down to an index of about 30.

The scale keeps going lower, however, and it’s possible to go all the way down to zero or even negative numbers. You get there by adding some on-site power production, usually rooftop solar. Throw some photovoltaic (PV) modules on the roof, and the house now produces some of the energy it uses. That production is included in the ERI calculation, so without some kind of backstop, home builders could leave out all of the things that make a home energy efficient — you know: insulation, air sealing, and little things like that.

R406.2 Mandatory requirements.
Compliance with this section requires that the provisions identified in Sections R401 through R404 labeled as “mandatory” and Section R403.5.3 be met. The building thermal envelope shall be greater than or equal to levels of efficiency and Solar Heat Gain Coefficient in Table 402.1.1 or 402.1.3 of the 2009 International Energy Conservation Code.

But this is in the 2015 IECC. And yes, that says the backstop is the 2009 IECC for building enclosure requirements. In climate zone 3, that would mean you could go back to R-13 walls instead of having to do either R-20 walls or R-13 cavity plus R-5 continuous. You could insulate ceilings to R-30 instead of R-38. You could put in windows with U-values of 0.5 instead of 0.3.

Here’s the table of building enclosure requirements for both the 2009 and 2015 energy codes. You can see what the difference might be in your climate zone. First the 2009 table:

There’s some serious relaxation of requirements in that statement.

Yeah, but would builders do it?

First of all, hitting the ERI numbers in the 2015 code isn’t easy. They vary from 51 to 55. which is significantly lower than the number achieved just by following the prescriptive path. Dropping back to the 2009 IECC requirements, the ERI without solar would be about 85. So they’d have to put on enough solar drop another 30 points. Is that possible? Yes.

We ran some numbers on a house we modeled here in Atlanta. It’s a 2,100 square feet, slab-on-grade, two-story house. The HERS Index was 73. When we added a 5 kilowatt PV system, a typical size, the HERS Index dropped to 38. That’s a reduction of 35 points, more than enough to get most homes to comply with the ERI path.

Even with the relaxed enclosure requirements, why would builders pay more to hit that lower number? The answer is that they might not have to pay more. The big players in the rooftop solar industry install their products for no cost sometimes. I heard a presentation by Solar City just last week, and they were telling the builders in the room about their free PV deal.

So there’s your answer. As a builder, you’d get to put in less insulation and cheaper windows. Then you get a lower ERI by getting the solar company to come in and install their stuff for free. Builders are business people. They understand profit. Why wouldn’t they take that deal?

This issue became a big deal in Florida this year during their code hearings. According to an article on the Code Watcher website, some at the Florida Building Commission were suggesting that the ERI calculation should exclude on-site power production entirely. After many hours of hearings, however, they reached a compromise. Rather than disallow any use of solar for energy code compliance, they set a new backstop. They changed from using the 2009 IECC as the minimum requirements to the 2015 IECC.

At the national level, the International Code Council (yes, I just said that) made some changes, too. First, they raised the ERI requirements for each climate zone. Those ERIs in the 2015 IECC ranged from 51 to 55. Now they’re 5 to 8 points higher. (Remember, a higher ERI means lower efficiency, so this makes it easier to achieve.) The other thing that got changed was the backstop. Just as Florida did, the IECC will now require the minimum enclosure levels in the 2015 IECC.

I’m fine with the relaxed ERI numbers. I thought the initial requirements were so low that few if any builders would choose that compliance path. The change in the backstop, though, is the really important one in my opinion.

This isn’t the end of the process. After the recent meetings in Kansas City, the voting members will vote again on the final changes. Assuming the changes I’ve described here get approved, the 2018 ERI compliance path will be a more robust option. And it may even get used.

Why You Shouldn’t Trade Thermal Envelope for Solar  [External]