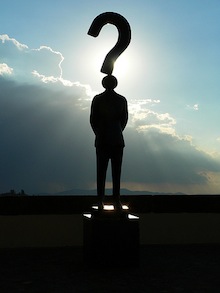 I spent seven years in graduate school studying physics to get my PhD. You might think that the most valuable lesson I got from that experience would have been about the nature of physical reality. I was studying the positions of atoms on crystalline silicon surfaces in ultra-high vacuum, you know. Or maybe you’d think it had something to do with the advanced mathematics I had to use or just how to survive grad school.

It was none of those things, though. It was simply to acknowledge my ignorance and ask questions. Like many people, I think, I went through school pretending to know things I didn’t when I encountered the boundaries of my knowledge. It was embarrassing when someone knew something that I believed I also should have known, so I just nodded my head and let them believe I understood.

In grad school, I suddenly found out that I wasn’t as smart as I thought and that technique of feigning knowledge didn’t work at all. Through my undergrad education, I’d always been at the top of my classes, but in grad school, for the first time in my life, I was in the bottom half. We had some guys who were absolutely brilliant. Two stand out: Glenn, the Oxford grad, and Dmitry, the Russian prodigy who’d gone through the Soviet system of being groomed for one career (physics, in his case) since his earliest days in school. My friend Mark was pretty amazing, too.

Learning to get past the pride barrier, to acknowledge that I didn’t understand something, and then to ask questions was huge. It helped me immensely in grad school, and it’s helped me especially in the career-shift I’ve undertaken in the past decade. I’m constantly learning new things about building science, as well as old things on deeper and deeper levels. I don’t have all the answers, and I try not to pretend that I do when I don’t.

Sometimes that pretense is not even fully conscious. I’ve actually convinced myself that I did understand something well enough when there was still so much more to learn about it. But then I think of my grad school friend Steve, who asked in class one day, “What is temperature?” I thought I knew that, but I had only a superficial understanding. The question, What does that mean?, can take you pretty far down the rabbit hole.

Are you asking enough questions?

Photo by Marco Bellucci from flickr.com, used under a Creative Commons license.