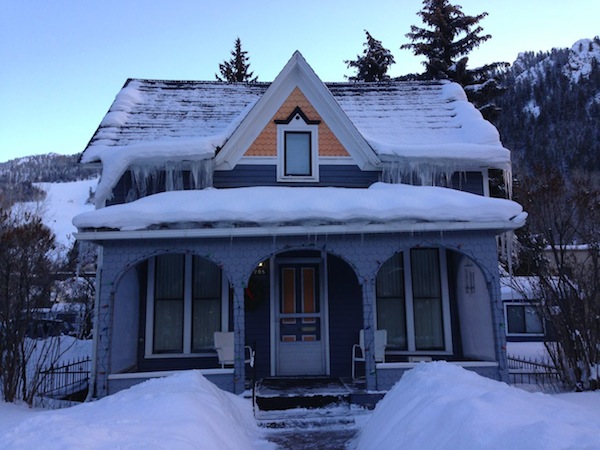 What caused this problem?

It’s really pretty obvious in this case. As you can tell from all the snow on the ground and on the porch roof, this cute little house has seen a lot of snow already this year. It’s in a town in the Rocky Mountains of Colorado, and they’ve gotten 100 inches of the stuff since October.‡

Let’s look at the clues:

Why is the snow melting on the main roof? It’s over the attic. (I doubt this little house has vaulted ceilings and kneewalls with conditioned space up there because it looks like there’s not enough space.)

Why is the attic melting the snow on the roof? It’s too warm.

Why is the attic too warm? Heat from the house is leaking into the attic, either from air leakage or inadequate insulation or both. Take a look at this closeup of this house. Those icicles are damaging the trim on roof. All that water may be damaging the roof itself, too. Icicles aren’t cute. You need to fix the problem, and that doesn’t mean doing what they do on so many houses in this little town: electric resistance heaters on the roof.

Two bandaids and a solution

You can see the low-tech bandaid solution for this problem in the photo below. This fellow is using a snow rake on a long pole to pull the snow down off the roof. Yeah, if you get the snow off the roof, it won’t melt and create ice dams like you see above. But this town gets 200 to 300 inches of snow per year. I’d find another solution so I don’t end up with a mountain of snow in my front yard. 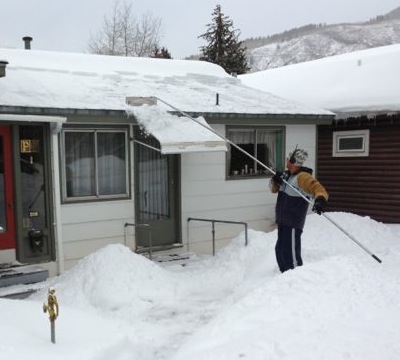 Bandaid solution #2 is worse. Here you compound the energy loss you’re already paying for with yet more wasted energy. You install electric resistance heaters around the edge of the roof, as shown below. A lot of houses in this town have these things. Hey, why not! They’ve got money to burn, and it’s easier than fixing the real problem. No, the best way to fix this problem is to address the root cause. If heat leaking into the attic is melting the snow, you stop the leaks. Not all homes have such dramatic air leaks as you see in the photo below, but many do. Even if the holes are all smaller, you can still get a lot of it sealed up and greatly reduce the amount of heat leaking into the attic because of air leakage. In the photo below, the insulation is also inadequate. So first, seal the air leakage sites. Then add more insulation if necessary. In new homes, get the attic sealed and insulated right the first time. If you’ve got a complex design with attic kneewalls and vaulted ceilings, pay attention to the details. Getting the building enclosure right isn’t a mystery.

† Not all ice dams are the same. The great majority of them are probably due to ignorance about heat flow in buildings, as explained in this article. Sometimes, however, they’re caused by changing weather patterns or solar radiation.

‡ I took this picture last week while I was skiing, and the snow was wonderful! My friend there told me it’s the best snow they’ve had in 30 years. Of course, more snow means worse ice dams—or more energy used trying to melt the snow on the roof with heat strips.