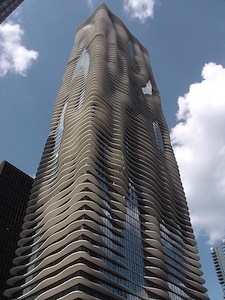 “If architects did their job there wouldn’t be any need for building science.” So says Joe Lstiburek, principal at Building Science Corporation, in an interview with Andrew Michler of Inhabitat. Actually, there still would be building science. It’s just that it would be fully integrated into the design process, where it belongs.

“If architects did their job there wouldn’t be any need for building science.” So says Joe Lstiburek, principal at Building Science Corporation, in an interview with Andrew Michler of Inhabitat. Actually, there still would be building science. It’s just that it would be fully integrated into the design process, where it belongs.

The photo at left is the Aqua Tower in Chicago. As Lloyd Alter points out in his Treehugger article about this abomination, this building has been called “architectural pornography” by engineer Ted Kesik. This building exhibits two of the biggest problems with the design of commercial buildings: Too much glass and too much thermal bridging. If you don’t believe it, see the thermal image in engineer Robert Bean’s article about the Aqua Tower.

A while back in the Energy Vanguard Blog, we published an article about a high-rise condo building here in Atlanta with similar problems. The author and his wife, both architects by the way, live in a 900 square foot condo and pay what seemed to them way too much in their electricity bills. Turns out that the concrete slabs that form the floor and ceiling suck a lot of heat out their condo in the winter. But hey, who could have suspected that concrete would do that?

Well, the architects who designed it should have. As Joe correctly points out in that interview, though, the “architects have caused their own problem.” What they’re doing is art, but it requires much more. Incorporating building science, which he describes as “the interaction of the building enclosure with the climate and the people and the mechanical system,” is what they should be doing. It used to be part of their job, but along the way somewhere, they dropped that piece to build glass boxes with cantilevered thermal bridges that are building science nightmares.

One of the things that Lstiburek likes to point out is that commercial buildings a hundred years ago were more efficient than the high-tech monstrosities we’re constructing now, yes, even the LEED-certified buildings. It’s time to dump the fascination with all-glass buildings and cantilevered slabs that don’t have thermal breaks.

INTERVIEW: Building Science Pioneer Dr. Joe Lstiburek on the Good, Bad and Ugly Side of Buildings by Andrew Michler, Inhabitat

What happens when artistic expression and culture trump common sense and principles in sustainability? by Robert Bean, Journal of Indoor Environmental Quality

Photo from wikipedia.com, used under a Wikipedia Commons license.