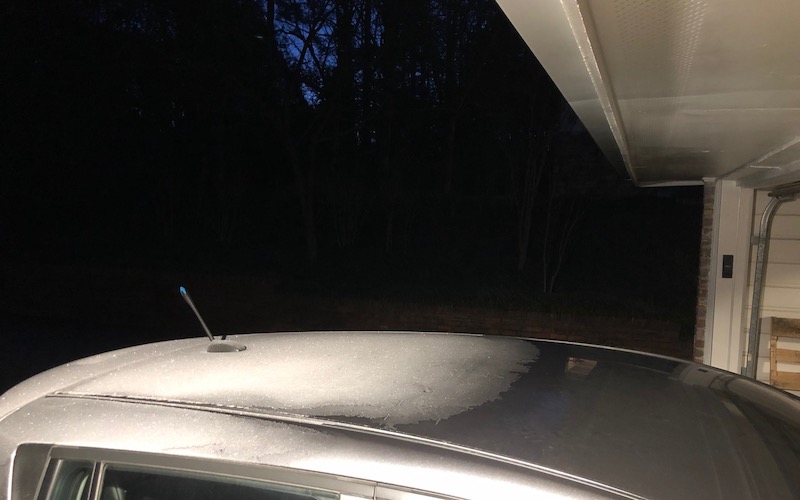 On Saturday morning as I was heading out for a run at the Chattahoochee River, I found my car in the condition you see in the photo above.  Let’s ignore the reason I was parked half in and half out of the garage and focus on the frost instead.  As you can see, the frost appeared only on the back part of the car.  The part of the car that was under the roof had no frost at all.

The physics of this phenomenon is really interesting so let’s examine it.  Then we’ll see how the principle involved affects what happens in buildings, specifically the comfort felt — or not felt — by occupants.

Do frost and dew fall out of the air?

I didn’t get a photo of the top of the roof over my garage, but it also was covered with frost.  Frost appearing on the highest surfaces makes it look like water vapor just falls out of the air and hits the first surface it finds.  According to meteorologist Paul Knight, quoted in an excellent 1985 Chicago Tribune article on this topic, that was the common belief up until the beginning of the twentieth century.

But it’s wrong.  The air around a house, above a house, and in the open garage or carport all have similar concentrations of water vapor.  But there’s nothing that would cause water vapor molecules to drop out of the air at a certain temperature and land on the first surface they find below where they began falling.

If that were true, frost would have formed on the part of my car under the roof.  It just would have been a thinner layer because of less water vapor in that smaller space between the soffit and the car roof.  But no matter how closely you look, there’s no frost on that part of the car.

Since gravity doesn’t explain the frost-free surface under the roof, what does?  The answer is in an article I wrote nine years ago, Naked People Need Building Science.  In that article I wrote:

Every object radiates heat. The amount of radiant heat it gives off depends on its temperature (to the 4th power!), surface area, and emissivity.

Anything that has a temperature will produce thermal radiation (also called radiant heat) by the jiggling of molecules within.  That thermal radiation removes heat from the object.  But the object is also receiving radiant heat from all the surrounding objects.  The image below is from my Naked People article and it illustrates the imbalance in radiant heat transfer in that case.  The single pane window at 35° F doesn’t radiate nearly as much heat back to the naked man as the naked man radiates to it.  So there’s a net cooling, at least in that direction. The night sky turns out to be quite cold.  It can absorb a lot of thermal radiation without sending much back.  The result is that a terrestrial object — the back of my car in this case — under a clear night sky will get colder.  That same object under a roof — like the front of my car — will have a more balanced transfer of radiant heat and thus will stay warmer.

There’s your answer.  The back of my car got colder than the front of the car because it radiated away a lot of heat to the night sky without getting much in return.  And that temperature decrease put the surface of that part of the car below the frost point (the below-freezing equivalent of dew point).

The implications for comfort

My Naked People Need Building Science article discusses the effect on comfort of being naked in front of a cold window.  As with the car getting colder when exposed to the night sky, a person exposed to a cold surface in a building will feel colder than when they’re surrounded by warmer surfaces.

My friend Robert Bean up in Calgary, Alberta deals with this issue all the time.  And not just because he lives in such a ruthlessly cold environment.  He’s also a member of ASHRAE’s committee on thermal comfort.  A lot of people think of air temperature and humidity and sometimes air movement when asked what factors affect thermal comfort, but the big one that doesn’t get nearly as much attention as it should is the one related to the temperatures of the surrounding surfaces.  It’s called mean radiant temperature and factors in the temperatures of all the stuff around you.  The warmer they are, the warmer you are.

This same phenomenon applies also to cases where our buildings make us too warm.  Bonus rooms are the most common culprit there, but it can happen in other places where you have high temperatures on one side of an inadequate building enclosure component.