To isolate the amount of malignant leakage in a duct system, you have to eliminate the duct leakage to the conditioned space. It’s actually easy to do this because for air to leak from one place to another, two conditions must be met:

If some of the ductwork is in conditioned space, removing either of those two conditions will eliminate the leakage to the inside. Getting rid of the holes (condition 1) is not practical – and not even possible in some cases – so the key to finding how much the ducts leak to the outside is eliminating the pressure difference across the ducts inside the conditioned space. It just so happens that someone doing a duct leakage test also will have a device that can pressurize the house. It’s called the Blower Door and is used for measuring the airtightness of a house. As you can see in the diagram above (from the Energy Conservatory‘s Duct Blaster Manual), the procedure is to run the Blower Door to pressurize the house to 25 Pascals at the same time the Duct Blaster is pressurizing the ducts to 25 Pascals. That creates equal pressures across the ducts that are in the conditioned space, and no air will leak to the inside.

With this setup, all the air that the Duct Blaster is blowing into the ducts will leak outside of the conditioned space, thus giving us a measure of the ‘malignant’ duct leakage.

The number is usually given either as the straight cfm25 (cubic feet per minute at 25 Pascals) or as a ratio of the cfm25 to the conditioned floor area served by the sytem tested. For example, if a duct system has a result of 385 cfm25 for the leakage outside the envelope test and the conditioned floor area served is 2500 square feet, the ratio would be 385/2500 = 0.15 cfm25/sf.

Another way it’s sometimes characterized is as a ratio of the cfm25 to the air handler flow. If the above 385 cfm25 occurred in a duct system attached to an air handler that can move 1200 cfm of air, this ratio would be 0.32, or 32%. Always make sure you know whether a normalized duct leakage number is referenced to the floor area or the air handler flow. They can be quite different. 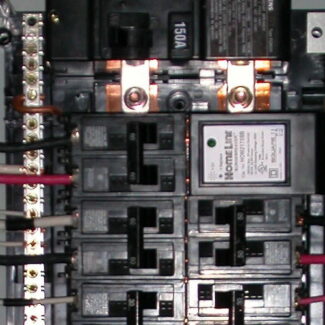 With the Inflation Reduction Act providing lots of incentives to improve your home  and go all-electric, let's look at how…

Allison Bailes provided excellent instruction in a class on performing home energy ratings. His lectures were well prepared and he responded well to the needs of the students. Allison has a strong knowledge in the area of home building and retrofitting with an emphasis on energy conservation and indoor air quality.