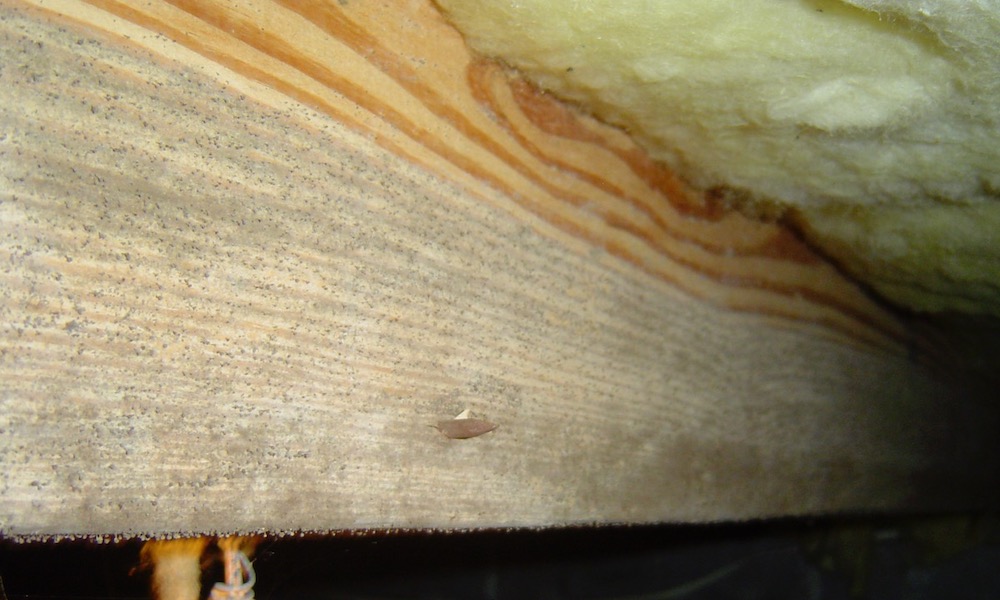 Do you have floor joists in your crawl space that look like the one to the left? In case you can’t tell how bad it really is, just click on it to see a bigger version. When you do, you’ll notice the ‘furries,’ as one of my friends called the microbial infestation growing on that wood. What’s going on here? Why is stuff growing on the wood down in the crawl space?

Well, I’m not a mold expert and haven’t identified the growth here as mold, but if it is mold, here’s what’s necessary for it to grow:

So, of the four requirements for mold growth, the one we have most control over is moisture. Keep the materials and the air dry enough, and we won’t have a mold problem.

OK, so you’ve measured and determined that you do have high relative humidity in your crawl space. That’s not unusual at all, especially in a humid climate like we have here in the Southeast. Where’s the moisture coming from? And why is the humidity in a vented crawl space higher than the outdoor relative humidity? Here are three reasons.

The first problem to look for is bulk water. If there’s standing water in your crawl space, you have either a drainage problem or a plumbing leak. You need to fix this immediately. Having a pond under your home is a bad, bad idea.

In the photo above, the problem was that the back yard sloped down to the house, bringing water up to the foundation wall. Since it was just a crawl space, the builder didn’t put any kind of water proofing on the concrete block or grade the yard properly to keep the hydrostatic pressure from building up against the block wall. You can see the result here. This was a new house with a serious bulk water problem. The joists were already growing stuff, and the fiberglass batt insulation was getting heavy and falling down.

2. Moisture Evaporating from the Ground

In the photo above, the ground was partially covered with a polyethylene vapor barrier. The dirt that wasn’t covered looked dry, but when I pulled the plastic back, I found that there was a lot of moisture in that soil. The soil that looked dry only looked that way because it was constantly evaporating moisture into the air of the crawl space. The foundation walls can also evaporate moisture into the air.

What do you do to solve the problem? Cover it all up with a vapor barrier!

3. Outdoor Air Coming in through the Crawl Space Vents

The numbers here come from the psychrometric chart (invented by Willis Carrier, the inventor of the modern air conditioning system), which relates temperature and humidity of air.

What Can You Do?

If you’ve got a vented crawl space with high relative humidity caused by one or more of the above, to solve the problem, you’ve got to remove the causes. Bulk water is solved by fixing the drainage or plumbing problems. Water evaporating from the ground or coming through the vents can be fixed by encapsulating your crawl space.

One thing that does NOT work is to try to treat the symptom by installing a dehumidifier. Don’t do that!

If the problems get really bad, though, you can always keep some kayaks down there so you can get around easier.

An Unexpected Benefit of Encapsulating a Crawl Space