Heating or Cooling - Which Costs You More?

I love to ask people here in Atlanta and other parts of the Southeast if they think it costs them more to heat their home or to cool their home. The answer I get is almost always the same - "Well, I live in the South, so of course I spend more on cooling." But is that correct?

Atlanta has the nickname 'Hotlanta,' so you might think that indicates we spend more on cooling than heating. I actually get a chuckle out of hearing people talk about how hot and humid Atlanta summers are, though, because I grew up in Houston and south Louisiana and later spent nine years living in Florida. I find the summers here quite pleasant. (Yes, this summer was warmer than usual, but in the 10 years I've been here, I've enjoyed the relatively mild summers we have.)

The truth, however, is that we spend more on heating than on cooling, sometimes a lot more. The pie chart below shows the energy costs for an old, mostly uninsulated house with a low-efficiency furnace. (These data come from energy modeling in a home energy rating. I don't have the actual energy bills for this home.) 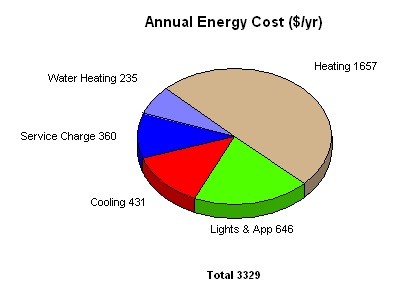 What about a high performance home, though? It should be better, right? Here's the pie chart for a new ENERGY STAR home under construction now. 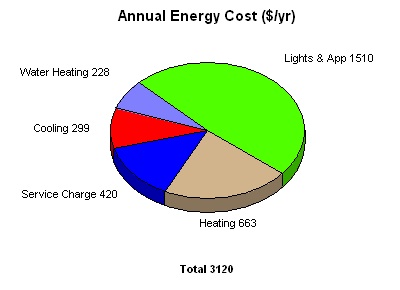 Yes, it's definitely better, but these homeowners will stay pay about twice as much for heating as they do for cooling. (Notice also that in a high performance home the lights and appliances become the dominant part of the energy costs because the building envelope and HVAC equipment are so much more efficient. Also, in case you're wondering why the ENERGY STAR home has a total annual energy bill that's about the same as the energy hog home, the former is about three times the size, which goes back to my point about energy efficiency versus energy conservation.)

If you want to know what's the best way to cut your energy bills, the first thing you need to do is find out what you're spending the most on and go after that. You can analyze your own energy bills to determine if you spend more on heating or cooling, or you can get a home energy rating to get more detail about where your energy dollars are going.

So, back to the original question of whether you're spending more on heating or on cooling, the majority of people in the US spend more on heating. Unless you live in Florida, along the Gulf coast, or in the desert, you're probably among the majority. In fact, the US as a whole uses about four times more energy for heating than for cooling (source: US Energy Information Administration).

While the notion of heating > cooling in the south is generally true for older leaky homes, my experience suggests new homes in the south built tight will be closer to parity for heating and cooling energy.

Submetering is, of course, the only way to know the reality. I have a fair amount of experience with submetered homes. What I've learned is that modeling software tends to overstate annual heating loads. The problem seems to stem from underestimating passive gains.

My previous home in Charlotte, which is a bit colder than Atlanta, had several passive solar features. Annual hvac energy averaged 2300 kwh for cooling and only 1900 kwh for heating (including strip heat) over a period of 5 years. The home was about 3,000 conditioned and had a fairly efficient envelope, but the low heating cost was mainly due to passive solar features. Interestingly, the energy modeling software I used, which was designed specifically passive solar buildings, predicted 2,100 kwh cooling and 3,600 kwh heating. A real shocker!

You make some good points, David, as always. I think any house that had heating & cooling consumption nearly the same in the Atlanta or Charlotte areas would have to incorporate some passive solar features to capture heat in the winter and minimize the heating load.

Have you published your submetering data anywhere? I'd love to see a good comparison of actual data with the modeling results for a lot of houses. I'm sure the programmers would love to see that, too, so they could improve their algorithms.

In my book, passive solar design is a key component of high performance. In markets like Phoenix and Miami, passive solar is all about keeping out the sun and strategic use of mass.

Aside from passive gains, another reason why high performance homes have a lower heating-cooling ratio is because the impact of tight construction has a much larger impact on heating than cooling.

As for the data, since I wasn't being paid for documentation, the data I have is not in good form for publication. Aside from inconsistent reporting (it was all manual), the energy models were created using several different software programs, and except for my own home, I have little information on actual thermostat settings (this is a problem with most in-situ studies). In short, there's not enough data to draw much in the way of conclusions.

This is extremely frustrating for me and is the main reason I decided to develop a fully monitored subdivision here in Arizona in partnership with Building America. One of the things we will do is to track thermostat setpoints through a gateway device. This can now be done with off-the-shelf hardware. We will also have a community weather station that will calculate local cooling and heating degree hours. Unfortunately, this project is on the back burner until the housing markets turns around.

One more thought: I strongly encourage energy professionals to specify an hvac submeter for their clients. Utility grade meters are inexpensive (available on eBay) and easy to install. The downside is you must rely on the homeowner to read the meter, twice a year in the case of a heat pump. Software-based energy monitors (at least those capable of sub-metering) represent a better solution but are still expensive. With Google Power Meter compatibility, web-based data storage is facilitated. I recently tried out the TED 5002-G, but the firmware is unstable and poorly designed. With all the attention to smart grid, I'm optimistic that better products at lower price points will evolve over the next few years.

Again, I totally agree with you, David. Passive solar should be part of every high performance home, as it was in the house I built. Unfortunately, we haven't gotten that far along yet, and a lot of homes with really good building envelopes and mechanical systems have done little to nothing about siting the home, designing the overhangs, or integrating thermal mass.

I know there's a lot of work going on to improve energy modeling software using BESTEST-EX, but a project like yours would be a great laboratory to really tweak the models so we can eliminate these discrepancies.

Great tips on analyzing your bills, and ways to start determining where your money is going.