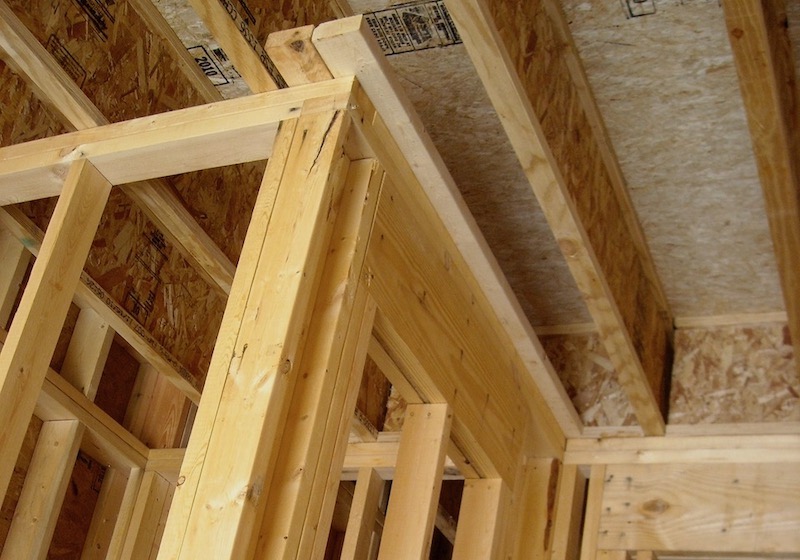 Yesterday, I visited a house in South Carolina and took the photo you see to the left. Notice anything peculiar about the framing here? If not, I’ll tell you the answer below, but let me say here that one feature not only violates one of the basic principles of green building but also indicates that the framers don’t understand the purpose of the various framing elements they construct.

In case you’re not familiar with what a house looks like without its clothes on, let me describe what you’re looking at here. First, this is in the basement, with another finished floor above. At the top of the photo are floor joists (an engineered product called I-joists) with the subflooring nailed to the top of the joists.

Below the joists are the interior walls for the basement rooms. The framing for the interior walls includes studs (vertical), plates (horizontal), and headers. That last item is a framing element that carries the structural load across openings for doors and windows. Without the regularly spaced studs to carry the load in the opening, the larger piece above the opening transmits the load downward through the studs that hold it up (jack studs).

Now do you understand what’s wrong in that photo? If not, I’ve highlighted it below. Here’s how it happens. The person framing that wall says to himself:

OK, I’ve got a door opening here, and every opening needs a header above it. So, I’m putting in a header.

OK, I’ve got a door opening here. Does this one need a header? There’s nothing above it, so, no, I don’t need a header.

Builders often don’t like their less skilled workers making decisions like that, though, because they could end up leaving out a header where one is necessary. (Hey, everyone makes mistakes – especially the day after St. Patrick’s Day!) That omission could create a bigger problem for the builder than using extra wood, so he has them use the simpler rule. The solution that covers them here is to have detailed framing plans. Don’t ask the workers to think much. Just have them follow the plans, which will show where headers go and where they don’t go.

The unnecessary header wasn’t the only problem in this photo, however. In addition to the extra wood in the header, they also put three more pieces of unnecessary wood, as shown below. Even if the header were needed here, these three pieces of wood would not. Instead of a structural header and three unnecessary pieces of wood, this wall should have a single 2×4 spanning the opening right above where the top of the door goes. Only a single stud on each side of the opening would suffice. The space above the opening should have only short studs (called cripples) set at the regular spacing. The drawing below shows what I’m talking about. This isn’t really what’s called advanced framing, but given how things are commonly done in construction, I guess it could be considered advanced.

Finally, since the photo above is of an interior wall, the only concern here is resource conservation, an important principle of green building. When the framers put extra wood in an outside wall, it compromises the building envelope because every piece of unnecessary wood is a place where insulation could have gone. A 2×4 has an R-value of about 4.4. The insulation that would take its place is typically R-13.

One reason that builders do this is that many hold the belief that a house with more wood in it is a better house. Actually, that’s a myth. When you understand that a house is a system, one of the most fundamental rules of building science, it’s easy to see that more wood actually can make a house worse.

The Low Spark of Raised-Heel Trusses