One of the most common questions I get when I describe homes with insulated rooflines is, “What does that do to the shingles?” Some roofing companies have made a lot of noise about this topic, saying that if the shingles can’t conduct heat downward into the attic, their lifetime will be greatly reduced.

What’s the truth about this claim? How much does shingle temperature really rise if the insulation is right at the roofline and the attic isn’t vented? Fortunately, it’s easy to find out because the Florida Solar Energy Center (FSEC) has done the research.  In a paper titled Literature Review of the Impact and Need for Attic Ventilation in Florida Homes (pdf), Danny Parker covered the gamut of attic ventilation research through about 2005.

In the summer of 2000, FSEC studied the issue of sealed versus vented attics. Click the title of the paper above to download the paper and read the details.  The experiment described here starts on page 15, in the section titled Testing at the Flexible Roof Facility at Florida Solar Energy Center.  The test conditions for the vented and sealed attics are described in the report:

For these tests, both attic systems consist of conventional roof trusses with 1/2″ plywood sheathing covered by 15 lb. roofing felt and dark (absorptance = 0.97) composition shingles. The “conventional” attic/roof system contains R-19 fibrous batt-type insulation at the ceiling plane. This attic is vented by outdoor air using soffit and ridge vents and is hereinafter referred to as the “vented” attic. The other attic/roof system contains 6 inches of spray-applied, open-cell foam insulation system at the roof plane (R-value ~ 22 hr ft2 °F/BTU) that serves to both insulate the attic space from the outdoor environment and seal it from outdoor ventilation airflow. There is no ceiling insulation in this test space, which is hereinafter referred to as the “sealed” attic. 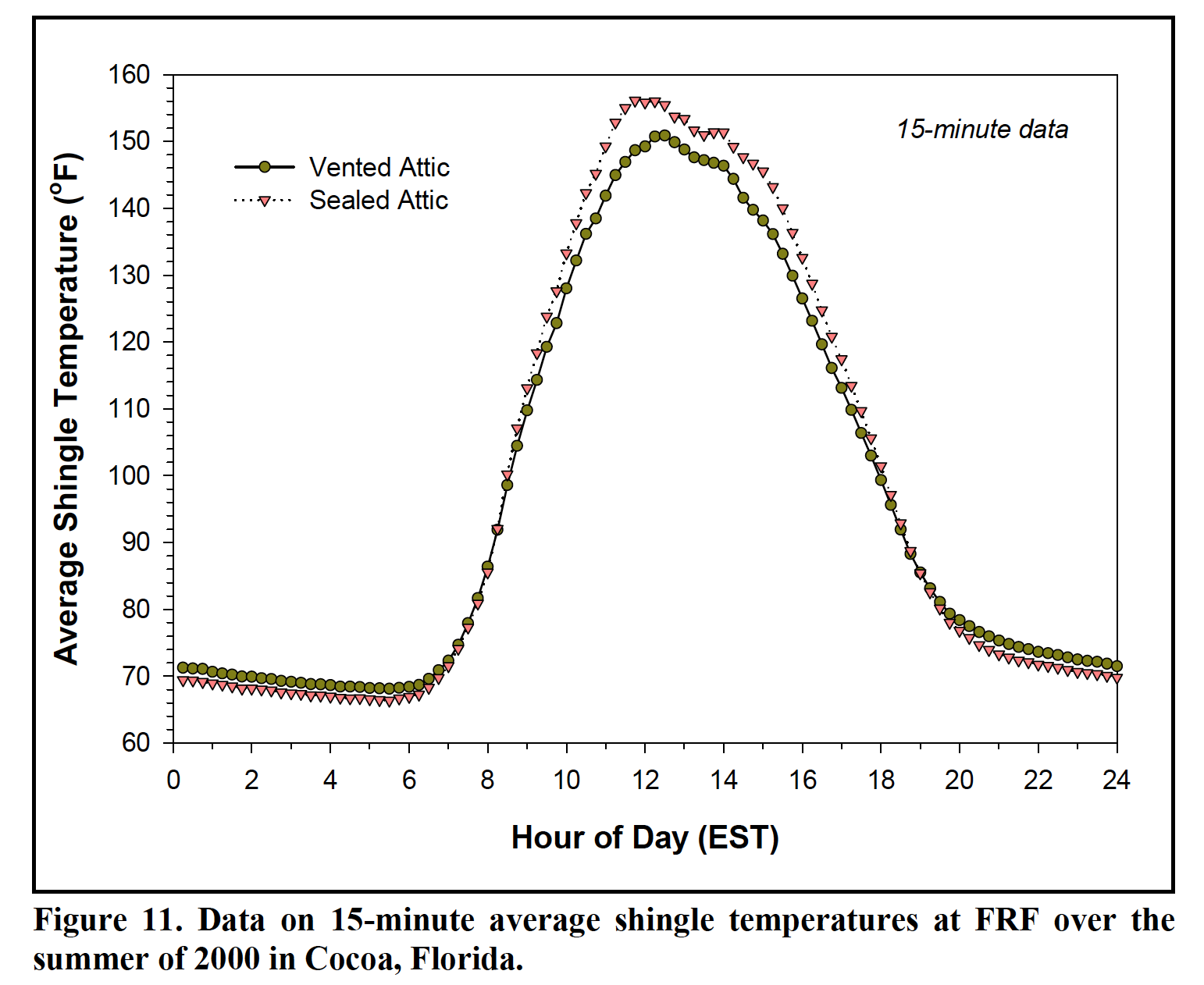 As you can see, the difference isn’t that great. The graph below shows the temperature difference throughout the day: 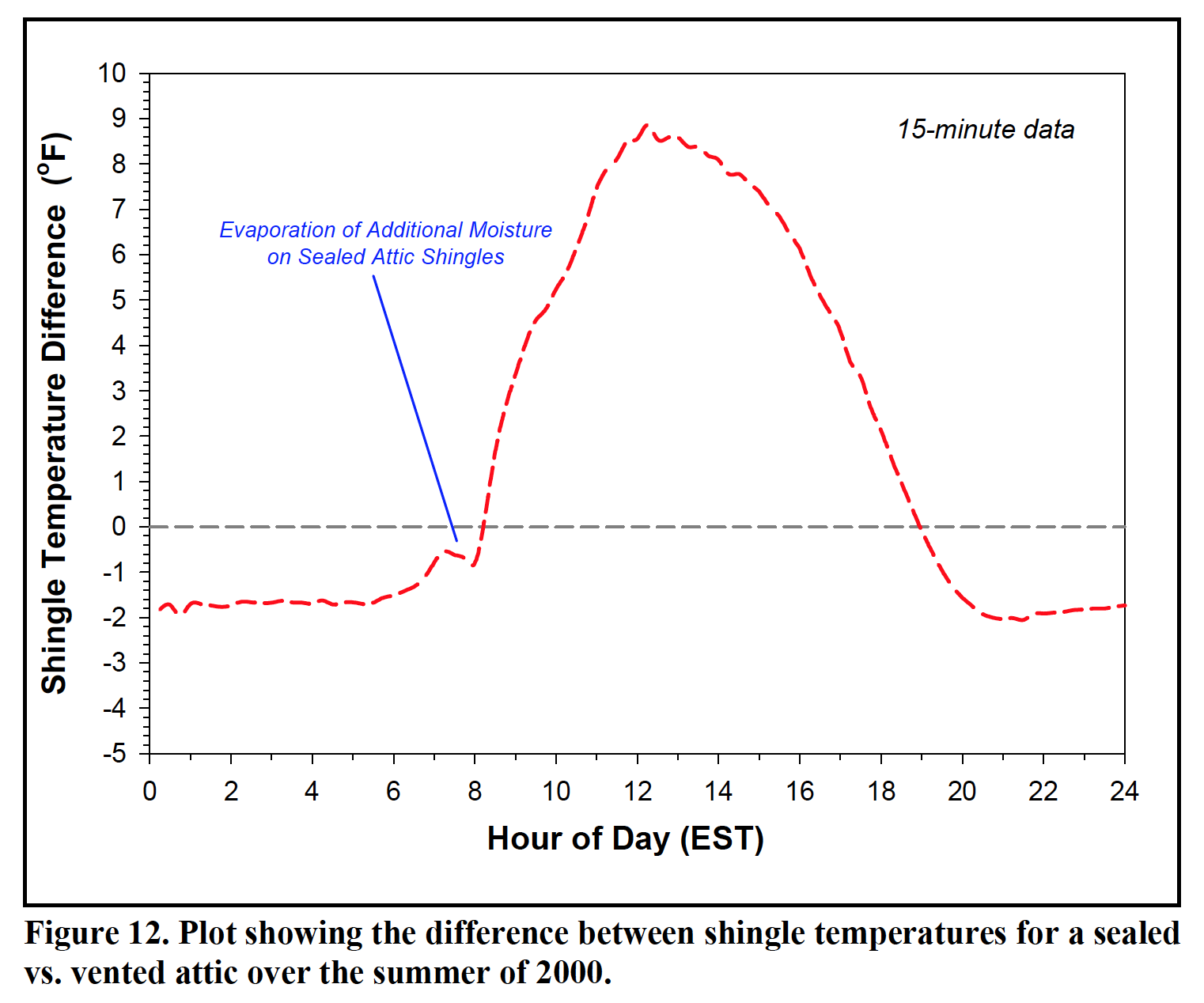 This FSEC study didn’t look at shingle lifetime, but I think that adding 9 degrees to a temperature of 150 degrees won’t make much difference. What kills shingles isn’t so much the temperature. It’s the ultraviolet radiation that they’re subjected to all the time.  And what makes shingles hotter more than the nature of what’s under the roof is the color of the shingles.

Here’s a bit of anecdotal evidence for you. Southface has a building constructed with structural insulated panels that they built in 1996. The asphalt shingles have been on the insulated roofline for 14 years now. They also have a detached garage with a vented attic. There’s no difference in appearance or performance of the two roofs.

Now, let me ask you ask you this – Do you know anyone who has ever collected on a shingle warranty? The answer is probably no. Even if it’s yes, however, shingle warranties are structured so that you’re not going to collect much if you do make a claim unless you have catastrophic failure in the first couple of years. An insulated roofline will have minimal effect, and certainly will not result in catastrophic failure.