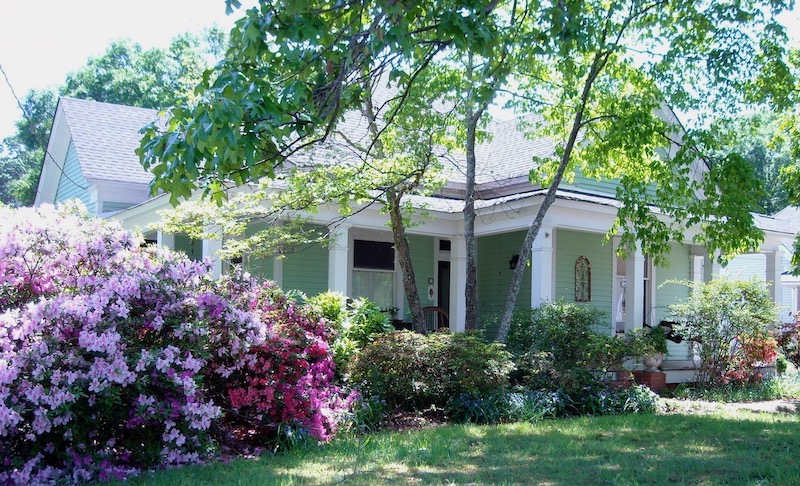 Today I visited my friend Perry, who’s buying a hundred year old house and wanted some advice on what he could do to improve it. My first thought, of course, was that he should buy the house with an EEM (Energy Efficient Mortgage). That will allow him to roll the costs of the improvements into the mortgage and end up paying less for the house (mortgage payment plus energy bills) than if he makes no energy improvements.

It’s a beautiful old house, with 15′ ceilings and a gorgeous landscape on an old tree-lined street in Carrollton, Georgia. And it’s chock full of opportunity. This house is so bad from an energy perspective that he’ll save boatloads of money, easily. In the attic, I found that many of the plaster and lath interior walls are exposed to the attic, mainly in the two large chimney chases. It was first evident when I had to climb up through one of those chases via a scuttle hole in a closet (photo at left). The problem here is that those interior walls perform worse than exterior walls because attic temperatures get much higher than outdoor temperatures, and a wall, even one with the extra thickness of plaster and lath, doesn’t have much R-value.

Another problem I found in the attic is that the ceiling over the kitchen was lowered sometime in the past. This surface, too, is uninsulated and open to the attic. You can see from the picture that the old ceiling is insulated, but that R-value doesn’t help the kitchen at all because the hot or cold attic air goes right by it through the hole.

My recommendation to solve these problems is to spray foam on roof deck, between and over the rafters, and bring the attic and all those uninsulated surfaces into the conditioned space. The HVAC system is currently in the crawl space and 15 years old, so they could move it to the attic to bring it inside the envelope, too.

Another problem area was the room on the back of the house that had been a porch at one time until someone decided to enclose it and make it part of the conditioned space. They left the rafters and decking exposed for the rustic, country look, but there was no insulation. As soon as I walked into that room, I noticed the increased temperature. The best fix here would be to pull the shingles off and install rigid foamboard insulation. In the crawl space, I found the usual culprits: huge air leaks, no insulation in the floor, uninsulated supply duct boots, panned joist return vents, and poorly installed ducts. We also got a bonus today. I noticed frost on unisulated sections of the refrigerant lines. At the air handler, the frost was coming out of the evaporator coil housing and the top of the housing had condensation. Peering inside, I saw that the coil was frozen up, most likely as a result of improper refrigerant charge in the sytem. floor. They’d save a lot of money on their energy bills by doing so, more than the increase in their mortgage payment, so this one’s going to be a slam dunk, a no-brainer, a piece of cake.

I was just there to take a quick look at the house today. Next week, Jason Payne, one of the home energy raters in the Energy Vanguard Energy Ratings HERS providership, will do a home energy rating on the house and model some improvements. I’ll keep you apprised of how it turns out.