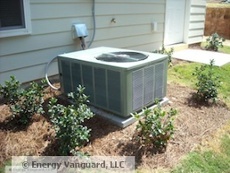 Here’s an easy thing you can do to keep your air conditioner running as efficiently as possible: Don’t crowd the condensing unit, the outdoor part of your AC. In the photo at left, you see a common problem. I took this picture at a brand new house a couple of months ago, and there’s not a problem right now, but what’s going to happen to those shrubs planted around the condenser?

Yep. As the shrubbery gets bigger, it’s going to crowd that condensing unit. When it does, it’s going to restrict the air flow across the condensing coil. Remember the articles I wrote about the refrigeration cycle — part 1, in plain English and part 2, in a bit more technical language? If not, now might be a good time to go read them.

Basically, the condensing coil is where all the heat that got picked up from your home gets dumped outside. Your AC is engineered to remove the heat by having a designed amount of air flow over the condensing coil. If less air flows over the coil, less heat is removed. That means the whole cycle warms up a bit, and your AC works harder to keep your home cool.

You’ll pay extra for it in more than one way: (i) Your monthly electric bill will be higher; (ii) your equipment may not last as long, so you’ll pay more in repair bills and in having to replace the AC sooner.

There are a lot of ways that condensing units get their air flow blocked. The most common is from plants growing too close to the unit, as shown above. Dirt and leaves piling up around the condenser cut air flow, too. These are things you can easily control by trimming the plants around the condenser and clearing away any debris.

If enough dirt gets between the fins of the condensing unit, that’s also going to reduce air flow. When you get your HVAC system serviced each year (you do, don’t you?), the service tech should check and clean the coil if necessary.

Sometimes, the HVAC company creates the problem. The photo below shows one such case. Not only are those condensing units too close to the wall of the house and the fence, they’re way too close to each other, too. They’re going to be fighting each other for air when adjacent units are running at the same time. This is a terrible installation and should never have passed the building inspection.

So, keep some space around your condenser and let your air conditioner breathe!