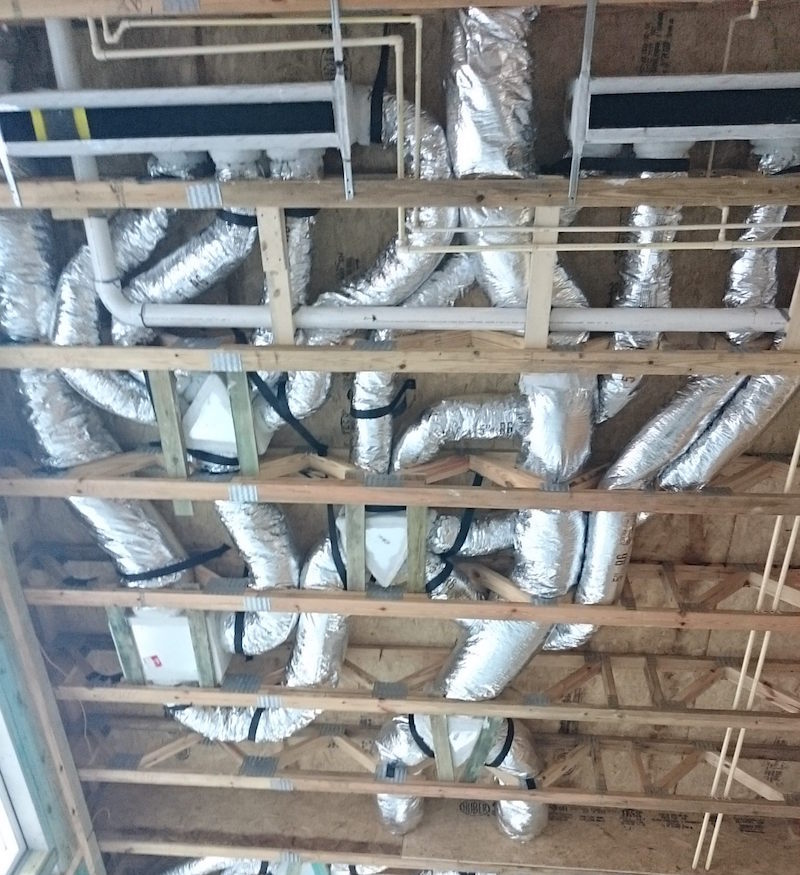 “Don’t sweat the small stuff,” they say.  You know what, though?  That may be great advice for your emotional life but it’s terrible advice for just about anything to do with buildings.  Whether you’re designing them, specifying materials, putting them together, or fixing them later, buildings have tons of small stuff.  And if you don’t get those things right, the consequences can be expensive, time-consuming, or even deadly.  Here are just a few little examples for you.

A seemingly insignificant amount of uninsulated or under-insulated area can have a huge impact on the amount of heat that moves through the building enclosure, and thus on the energy bills.  An attic, for example, with 99% insulated to R-38 and a measly 1% (the pull-down stairs) insulated to just R-1 reduces the average R-value to R-28.  That 1% of the attic resulted in a 27% reduction in the R-value!  (See the details here.)

Sadly, a huge number of duct systems were installed without having been designed properly.  You might think it’s a simple matter of moving the air from the heating and air conditioning system to the vents where it’s blown into the home, but there’s a lot of physics that gets ignored in the typical home, especially when it comes to flex duct.  Every time the air turns or goes through any type of fitting, it loses pressure.  The result is that duct systems like the one below don’t move as much air as they should.

Now we’re getting to the truly small stuff.  A water vapor molecule is tiny.  But when enough of them float around in your home and find cold surfaces, the result can be rotting wood, corroding metals, and unintentional biology experiments.  Also, if the people who designed and built the house as well as those responsible for the mechanical systems didn’t sweat the small the stuff, the owners may be sweating it in summer if the home is in a humid climate.  The occupants also have an important role here.  Should they decide to keep the air conditioner fan in the “on” position in a humid climate, they reduce comfort and hurt their indoor air quality, in addition to having higher electric bills.

Again with the tiny stuff, indoor air pollutants are becoming more and more important.  Most homes in the US now have to meet code requirements for airtightness.  That means pollutants that offgas from materials in a home or that are generated in the home (think cooking here) or that get sucked in from the garage will stick around longer in an airtight home than in a leaky home.  Source control is the best way to deal with them, but that requires looking carefully at all the materials used in building in a house as well as the materials brought in by the occupants.  Then there’s local ventilation, like having an effective range hood in the kitchen…and using it.  Whole-house ventilation is also critical for airtight homes.  And effective filtration, even going to MERV 13, is required to deal with some of the worst indoor air pollutants like particulate matter 2.5 microns or less (PM2.5).

So don’t let anyone tell you not to sweat the small stuff when it comes to homes.  There’s a lot of small stuff that everyone involved should be sweating over, figuratively, so the people who live in those homes don’t have to sweat, figuratively or literally.

To adapt that popular book’s title and subtitle just a wee bit, we can say you definitely should sweat the small stuff… and yeah, it’s all small stuff.