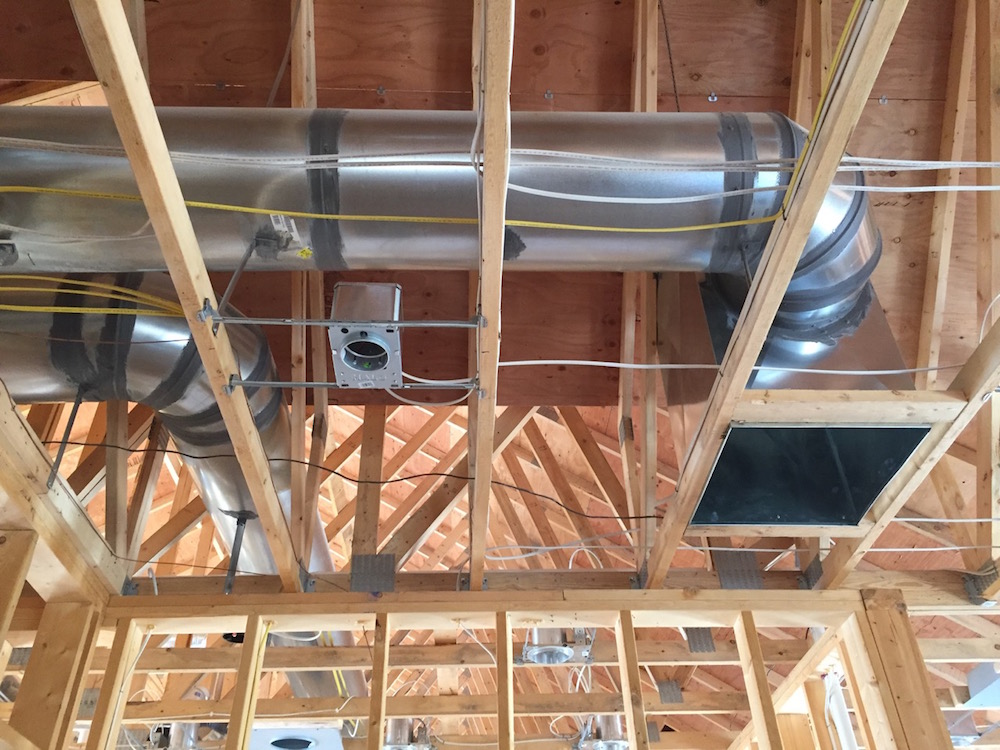 What if a builder refused to build from plans drawn by an architect? What if a tile installer refused to implement designs handed to them and instead did their own thing? What if an HVAC contractor told a potential client they wouldn’t install a system designed by a third party to ACCA protocols? One of those questions is more real than the others. Of course builders build from architects’ plans and tile installers don’t throw out designs they’re asked to implement. But third-party HVAC design is a different animal.

The benefits of using a third party for HVAC design

We do third-party residential HVAC design here at Energy Vanguard. Andy Bell runs that part of the company and is a true master of the art and science of heating and cooling load calculations (ACCA Manual J), equipment selection (Manual S), register and grille selection (Manual T), and duct design (Manual D). That’s pretty much all he does these days.

Our clients are architects, HVAC contractors, home builders, owner-builders, and homeowners having their dream home built. When they hire us, they do so for several reasons. They want:

We’re one of a pretty small group of companies that do third-party design. Mostly what happens is that HVAC contractors make the decisions about what equipment to install, what size it will be, and how to get the heating and cooling distributed. Sometimes they do actual design, using the protocols of the Air Conditioning Contractors of America (ACCA). Mostly they use other methods, usually rules of thumb.

The problem with rules of thumb is that they’re unreliable. Using the industry standard ACCA protocols, when they’re done accurately, doesn’t mean you’ll never have any problems, but it gives you the best shot of designing a system that will work. We’ve done hundreds and have had only a handful of former clients come back to us with problems. In those cases, we’ve been able to help them figure out what’s going on and fix the problem.

Sometimes we have a different kind of problem. We usually work remotely and never see our clients. They hire us. We provide the HVAC design documents. They use those documents to hire a contractor (in the cases where they don’t already have one). And that’s where things can fall apart.

One thing that happens is the client provides our design documents to a contractor, who says, “I’m not going to install that. I didn’t design it.” Or worse, they take a look, see what size we’ve specified for the air conditioner, do a quick calculation in their head using a rule of thumb, and say, “This design is wrong. It won’t cool your house. You wasted your money hiring them, and I’m not installing that.”

Most of the time we’re able to work with the client and the HVAC contractor to overcome those initial objections. Occasionally, though, every single contractor the client talks to is dead set against using our design. And because they meet with the client face-to-face and we’re only a voice on the phone, the contractors have a little extra sway.

If the equipment sizing and duct design are significantly different than what they’re used to installing, they’re afraid it won’t work. When that job is finished and people are living in the house, who are they going to call if the system doesn’t work? Well, the first call probably goes to the builder. Then the HVAC contractor. Then the third party HVAC designer, if the previous two calls didn’t get the desired results.

So the HVAC contractor is ahead of us in the accountability line. They look at a design that’s different from what they’re used to installing, and that extra accountability is what scares them.

How do we fix this?

I’m not writing this to throw HVAC contractors under the bus. Yeah, there’s plenty of bad workmanship and uneducated contractors out there, but the HVAC industry needs a revolution. Contractors have three big areas of responsibility when they get a job:

Where I’d like to see us get to is to have a relationship between third-party HVAC designers and HVAC contractors like that between architects and builders. Architects and builders are both licensed professionals, so one part of the answer may be to require licensing for third-party designers. I’m not convinced that would solve the problems, though. If licensing were the answer, the contractors — who have to be licensed in most places — would already be doing everything properly. And my friend Kristof Irwin of Positive Energy in Austin, Texas is a licensed engineer who faces the same kinds of problems.

My crystal ball is a bit foggy right now, and I can’t see where this ends up. Maybe the answer is time. As third-party HVAC design becomes more common, the difficulties should diminish. Maybe it’s educated home buyers. I’m doing my part here to help with that. Maybe it’s something structural, like licensing. I don’t know.

What do you think?