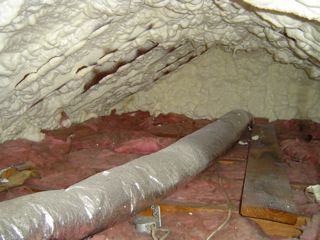 Reason #1 to move the building envelope upward and encapsulate the attic is to get HVAC equipment and ductwork out of the blast furnace. An attic, which can get up to 130° F or so on a hot summer day, is not a good environment for your heating and cooling system. By spraying foam insulation at the roofline, the air handler and ducts in the attic now come inside the conditioned space boundary.

Reason #2 would be to spray foam at the roofline because the air leaks at the flat ceiling level are plentiful and difficult to seal that it’s practically impossible to do a good air-sealing job there without a lot of time and labor. Some problems that might send you looking upward for a new building envelope location could be:

Reason #3 would be that the attic has a lot of headroom and is used for storage. Also, if the plan is eventually to finish out some space in the attic, insulating the roofline can make sense even without the issues described above.

Having spent some time doing a lot of air-sealing at the flat ceiling level and doing the before and after Blower Door testing to measure air leakage, I can tell you that I’d much rather have the spray foam crew come in and insulate the roofline. It’s not easy work to pull insulation back, seal the top plates and wiring penetrations, make covers for can lights, and do all the other work associated with improving the existing building envelope, all while balancing on your knees on top of the ceiling joists. So, overall, I’m generally in favor of insulating the roofline.

Sometimes, though, the best option is to keep the building envelope where it is in existing homes. If it’s a newer house with relatively low air-leakage and no air handler or ductwork in the attic, it’s probably more cost-effective to do the air sealing that you can do at the flat ceiling and then look for better opportunities for improvement. You may not end up with quite as good a Blower Door number, but the money you didn’t spend on spray foam may allow you to retrofit that horrible ductopus in your crawl space.

In new construction, my preference is not to have an unconditioned attic at all, from the beginning. Buffer spaces like attics and crawl spaces are where most of the problems arise in existing homes, so let’s just design them away. If you’re going that route, spray foam isn’t the only game in town. I like structural insulated panels, myself, having built a house out of SIPs once upon a time.

Bottom line: If you get a home energy audit with a recommendation to have spray foam insulation installed on your roofline, make sure you ask them to justify their recommendation. If you get a new home designed, and it includes unconditioned attic, make sure they aren’t intending the HVAC system to go there.