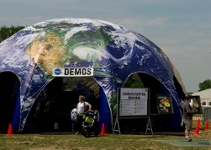 I think I first heard the term greenwashing in 1990, as I was getting ready for the big 20th anniversary Earth Day event in Tarpon Springs, Florida. ‘Green’ was starting to get some traction as a marketing term meaning ‘environmentally-friendly’ or ‘sustainable,’ and a lot of companies started jumping on the bandwagon, no matter where they fell in the sustainability spectrum.

I think I first heard the term greenwashing in 1990, as I was getting ready for the big 20th anniversary Earth Day event in Tarpon Springs, Florida. ‘Green’ was starting to get some traction as a marketing term meaning ‘environmentally-friendly’ or ‘sustainable,’ and a lot of companies started jumping on the bandwagon, no matter where they fell in the sustainability spectrum.

In the past few years, the trend toward greenwashing hasn’t lost any momentum. The word ‘green’ has become so popular, in fact, that everyone wants a piece of it. The problem is that if everything is green, nothing is green. It becomes a meaningless term.

What provided the impetus for this article was getting a tip about Crown Communities† and their Green Cents labeled new homes. Keep reading to find out why it’s nothing but greenwashing.

In essence, greenwashing is just what it sounds like: making something seem like it’s environmetally friendly when it’s not. It can take many forms, however. Tristan Roberts at Building Green wrote an article called The Nine Types of Greenwashing, in which he discussed some of the ways that companies will greenwash their products or services. They are:

The names give you a pretty good idea of what’s going on, but you should read Tristan’s article for his elaboration of each method.

Crown Communities builds new homes in Georgia, South Carolina, and Alabama. Yesterday, I was alerted to their Green Cents program, so I checked it out. Here’s the overview from their website. If you’re a homebuyer, that might sound pretty good. Sadly, what they’re saying is that they build a house that might be slightly better than the worst house you’re allowed by law to build (i.e., one that just meets the building code). Let’s take a look at some of the items in their list.

ENERGY STAR appliances. This applies to the dishwasher and refrigerator. If you’ve done any shopping for these items lately, you may have noticed that it’s hard to find one that’s not ENERGY STAR certified.

Integrated house wrap. In other words, they’re going to install it the way it’s supposed to be installed. Maybe. Builders are getting better at this, and maybe Crown is doing it right, but still, doing what you’re supposed to do isn’t anything I’d call green.

Total draft elimination. Clearly they’re not defining draft as infiltration or air leakage, because every house, even an uber-tight passivhaus, leaks air. What they probably mean is that they’ve started paying attention to air-sealing…now that it’s required by the energy code in all three states where they’re building homes.

Thermal Resistant R-Value Insulation (walls R-13, ceilings R-30). This is my favorite! Let’s throw a bunch of sciency terms in there that all mean the same thing. Insulation is made of ‘thermal resistant’ material. All insulation has R-value. And guess what? In most of Georgia, Alabama, and South Carolina, code requires walls to have R-13 insulation and ceilings to have R-30, so again they’re building a code minimum house here. Unless they build in the north Georgia mountains, where R-38 is required for the ceilings because they’re in IECC climate zone 4.

The other items on their list are either code minimum (13 SEER air conditioners, low-e windows), things you’d expect anyway (who’d buy a new home without drip-free faucets?!), items that may be better than starter homes (fiber-cement siding), items that meet a lower standard (SFI is widely considered inferior to FSC for sustainably grown lumber), and one thing that they seem to be confused about (they probably mean CO detector, not CO2).

According to another page on their website, a Crown Green Cents home can save you about $1733 per year…if you compare it to a “typical 5-10 year old home.” Funny, though, R-13 has been the code for wall insulation since the ’90s, yet they say this 5-10 year old home has R-11 in the walls. House wrap has been pretty standard for at least as long, yet their 5-10 year old home has none. They’ve built themselves a nice Straw Man of a house there. That should be number 10 in Tristan’s list.

If you buy a Crown Green Cents home, you’re probably not getting a bad house. Energy codes have improved so much that the code minimum house now is actually a decent house, especially compared to older homes. Well, at least it has the potential to be a good house, depending on how well the code was enforced.

But Green Cents homes aren’t green in the truest sense of the word for the following reasons:

I’m sure plenty of home builders are going this route. John Wieland Homes has something similar they call their GreenCraft certified homes. (Interestingly, Green Cents is reminiscent of Georgia Power’s EarthCents program, and GreenCraft sounds a lot like Southface’s EarthCraft House program.)

Keep in mind, however, that there are important differences in homes that attain green-building certifications through third-party verification. The standards in true green-building programs are higher. The claim that ‘it’s green because I say it’s green’ has always bugged me. Yeah, it may be, but let’s see your evidence.

† Yeah, I know. I might get a phone call from their lawyer because I mentioned their name here and criticized this little label they’ve created. It’s happened before. I haven’t written anything that comes close to libel or slander, though, so if they want to come after me, I’m happy to talk with them. Maybe I can convince them to do some ENERGY STAR homes or at least get a HERS Index.