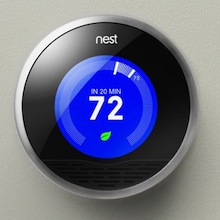 As I wrote here recently, your HVAC system is like a faucet and your building envelope like a cup. The leakier your cup is, the more you have to open up the faucet. One thing I didn’t write in that article is that is that the leakiness of your cup depends on the temperature difference between inside and out. In the world of physics and building science, we call that temperature difference ΔT (pronounced delta T).

In another post, I wrote about heat flow and showed the basic equation for heat loss or gain through the building envelope in a home:

Let’s focus on winter because that’s when most homes have the biggest temperature differences. I ran some simple calculations using this equation for two scenarios. In both cases, the house has a total UA equal to 300. (UA is the product of U-value, which is the reciprocal of R-value, and the area.) In both cases, I’ll use 30° F as the outdoor temperature.

In this scenario, we’ll leave the thermostat at the normal setting. Let’s take 70 °F as the indoor temperature (despite the strange geography of thermostat setoints showing that Texans are likely to use that setpoint whereas Vermonters live with a cool 63 °F setpoint). That gives us a ΔT of 40 °F. Thus,

Using a time period of 8 hours, we get a total heat loss of:

That’s the amount of heat the home loses through the walls, floors, and ceilings if we leave the thermostat alone. Yes, this is a simplification that ignores other forms of heat loss and the heat gains inside the home, but it gets at the heart of why setbacks work.

Now, let’s look at the same house (UA = 300) in the same outdoor conditions (30 °F outside) and set the thermostat back 8 °F for 8 hours. Since our heat loss equation is linear and 8 is 20% of 40, we would see a 20% reduction in the heat loss during that period if the temperature dropped those 8 °F immediately.

Instead, let’s make it a bit more realistic and say that it takes 2 hours for the temperature to drop those 8 °F. That means our ΔT doesn’t get to 32 °F until the third hour so in this case we’d have 2 hours with ΔT between 40 °F and 32 °F and then 6 hours with ΔT = 32 °F. I made it simple and assumed a steady temperature decrease rate of 4 °F per hour, so here are the numbers:

Adding up the total amount of heat loss in the far right column, we find:

This number is 18% less than the 96,000 Btu of heat loss when you leave the thermostat alone. This bit of basic physics yields a simple result:

Well, actually we didn’t need to run any numbers to show that because the equation shows it all by itself, but it’s instructive to see how some sample numbers work out, I think. So, setting back the thermostat and letting the house temperature get closer to the outdoor temperature reduces heat loss or gain through the building envelope. The reduction is proportional to the ΔT. Your heating system has to supply an amount of heat equal to what the home is losing.

Yes, real homes behave in more complex ways than my calculations allow for, but the above scenarios capture the basic physics involved. To verify that this actually happens in homes, all I really need to say is:

Michael Blasnik has done multiple studies and found that thermostat setbacks save energy and money.

In case you don’t recognize the name, Michael Blasnik is your go-to guy when you need residential energy data. I wrote a couple articles about a big study he did with Advanced Energy in 2009 (one on REM/Rate and another on radiant barriers). He’s been in this field as long as I might’ve been had I figured out what I wanted to do right after college (early ’80s) and he knows his stuff. I mean, he really, really knows his stuff.

The table below shows the results of 7 studies that he conducted for a gas utility company in the northeast US (first 7 rows) and one study done by another group (RLW Analytics, last row). As you can see, the savings are significant, and these numbers are the incremental savings. That is, they’re the savings that can be attributed to that measure only after accounting for the effects of the other measures taken to improve the homes in the studies. The percent savings range from 5.0% to 8.2%. In addition to Michael Blasnik’s work, there are plenty of other studies available, and Canadian engineer Robert Bean, has compiled a list of 22 of them. Check out his comments about programmable thermostats preceding the list on the Healthy Heating website.

I like to consider new information and question what I think I know about the world. When warranted, I’ll change my views to incorporate the new information and replace old views. The introduction of the Nest Learning Thermostat last fall gave me a chance to look at the argument against using thermostat setbacks.

Yes, it’s true you have to consider the equipment because if recovering from a thermostat setback means that your heat pump kicks the electric resistance heat on, your bill may be higher. Right-sized heating and cooling equipment and equipment that can adjust its capacity to meet the loads also impact the effectiveness of setbacks. So does a lot of thermal mass in homes (though most furniture doesn’t have a lot of thermal mass). Is it possible that setbacks won’t save money for you? Absolutely. The title of this article refers to the general case, though, and for a great many homes, thermostat setbacks can save energy.

My first reaction to people who say that thermostat setbacks don’t work has been to say that they need to go back and study the basic physics of heat transfer. After going through all this, that’s still my view. Yes, if you have a right-sized heating and cooling system, you need to be careful with setbacks because the house may not heat up or cool down quickly enough when coming out of setback.  But to recommend that no one will ever save energy with setbacks is foolish.