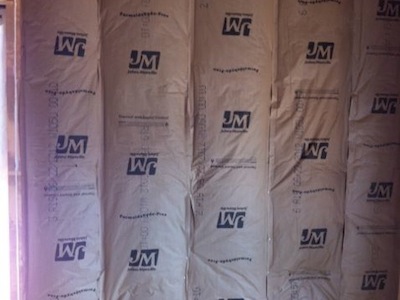 SPOILER ALERT: The answer is right below this photo so if you’d rather wait and find out when you see the movie in the theater, don’t read any further.

The answer is that it doesn’t matter. Nope. You can install the paper facing however you want—as long as the building inspector† lets you, of course.

Why doesn’t it matter?

Second, if you install it the wrong way, it’s unlikely that you’ll have a problem. I suggest you read Joseph Lstiburek’s paper, Mind the Gap, Eh! The graph below, from that paper, shows water vapor permeance as a function of relative humidity. As you can see, the permeance rises as the relative humidity rises and hits 10, the point at which we describe a material as vapor permeable, when the RH is 60%. The upshot here is that If you put the kraft paper on the wrong side and it gets wet, it won’t trap moisture. The wetter it gets, the better it dries. If you put it on the right side, where the humidity is, it’s not much of a vapor retarder.

What about the advice to put it on the ‘warm-in-winter’ side?

If that really mattered, do you think the US building code would have dropped the requirement to use paper-faced batts? The warm-in-winter suggestion says that if you’re trying to limit the diffusion of water vapor, put the vapor retarder on the humid side of the wall, where…uh…it’s not able to retard much vapor.

In a really, really cold climate, it may matter, but even in Maine and Ontario, vapor retarder paint would be a better way to go. If you want to slow down the vapor diffusion, why not do it before it hits the drywall?

So just relax. If your building inspector wants you to put the kraft paper on the ‘wrong’ side, take another look at the graph above and be comforted that it doesn’t really matter. Then go get yourself some unfaced batts (and do your best to install them to Grade I quality).

*Speaking of fiberglass batt insulation, Carl Seville (a.k.a. the Green Curmudgeon) wrote another article on poorly installed batts recently, with photos of Knauf fiberglass. Rather than being a bully, like Guardian did to me a couple of years ago, they commented on the article and asked for a dialogue on how to get better installation in the field. Kudos to Knauf!

†My friend Abe Kruger likes to say that you should treat building inspectors like wild animals. You have to approach slowly and quietly because they spook easily. In the HERS rater class I taught in Toronto this week, I used that analogy but before I could get to the reason why they’re like wild animals, one of the students said, “You mean we can shoot them?”