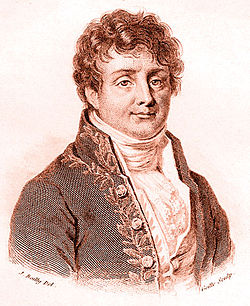 I’m new to global warming. I didn’t hear about it until 1983. Even thirty years ago, the science behind the greenhouse effect and global warming was well known.  French Physicist and mathematician Joseph Fourier (shown at left) is generally credited with being the first to hypothesize that the Earth is warmed by its atmosphere and even that we humans can change the climate.  That goes all the way back to 1827.

Fourier is known to all who study physics for his development of Fourier Analysis, which allows you to model mathematical functions as a series of sines and cosines, and Fourier’s Law, which is the basic law of heat flow by conduction. The latter is known to beginning building science students as:

What Fourier did was to calculate that the Earth, because of its distance from the Sun, should be significantly colder than it is.  He calculated the amount of radiant energy hitting our planet and found that it wasn’t enough to account for the temperatures we have here. In addition to considering the possibility of additional radiation from interstellar space providing the boost, he proposed that the atmosphere trapped heat and caused the warmer temperatures.

The really amazing thing about Fourier’s work is that he did this before James Clerk Maxwell, Jožef Stefan, and Ludwig Boltzmann were even born.  In the 1820s, scientists were still decades away from understanding that light, heat, electricity, and magnetism were all related.  Maxwell put that together in the 1860s with his famous set of four equations that govern the field of classical electromagnetism.

Only then could Stefan and Boltzmann figure out their law of radiation, showing that the energy transferred by radiation is proportional to the fourth power of the radiating body’s temperature and its emissivity.  (The emissivity of materials is something we exploit in the making of low-e windows and radiant barriers).  What Fourier did in the 1820s was revolutionary, but now this calculation is basic enough that it appears in introductory physics textbooks.

Several other 19th century scientists took up Fourier’s work and studied radiation, absorption, and conduction in atmospheric gases, trying to get a handle on how our climate works.  The Irish scientist Tyndall was one of the first to try to calculate how infrared radiant energy flows affect the climate.

Then came the interest in the effects of carbon dioxide. Langley looked into this in the 1880s and calculated, incorrectly, that the Earth’s temperature would be only about -200° C (-328° F) were it not for the presence of CO2 and its insulating effect on the Earth’s atmosphere.  It would actually be about -18° C (0° F), but hey, we’re talking about someone doing this back in the 1880s.  The Dowager Countess, mother of Lord Grantham, was probably still hot and fashionable then!

One thing that Tyndall concluded from his work was that water vapor had more effect on atmospheric temperatures than carbon dioxide.  In 1895, Svante Arrhenius (shown here) gave a presentation to the Royal Swedish Academy of Sciences on the subject. His paper was titled, The influence of carbonic acid in the air upon the temperature of the ground. (What they called carbonic acid, we know as carbon dioxide.)  In it, he disagreed with Tyndall and said carbon dioxide was the more important greenhouse gas (though I’m sure he didn’t use that term).

Arrhenius’s study was pretty darn interesting.  He wanted to know what would happen if the CO2 levels were different than the then-current concentration of 300 parts per million by volume.  He calculated the resulting temperature for levels that were 0.67, 1.5, 2.0, 2.5, and 3.0 times as high and also looked at how it changed with longitude.

His results were quite similar to what scientists have found a hundred years hence:  Doubling the atmospheric CO2 results in a temperature rise of about 6° C.  Current work in the area of climate sensitivity puts his result just outside the 3 °C ± 1.5 °C of modern climate research.

The good thing about science

As with most areas of science, the revolution happens first, and then the focus shifts to filling in the details. Thomas Kuhn discussed this in his wonderful book, The Structure of Scientific Revolutions, describing the revolutions as periods when we undergo paradigm shifts. I’m not sure the development of climate science represents as much of a paradigm shift as it does the creation of a paradigm, but the work of Fourier was definitely groundbreaking. Since his work in the 1820s, we’ve added a lot of documentation to his ideas about the greenhouse effect and global warming (including that the so-called greenhouse effect isn’t what keeps greenhouses warm, but that’s for another article). Scientists have tons of data on this subject and among them, there’s not really any debate about (1) whether our planet is warming and (2) that our actions are a big part of the cause.

You can choose not to believe it, of course, but as astrophysicist Neil deGrasse Tyson said recently, “The good thing about science is that it’s true whether or not you believe in it.”

Much of the information from this article comes from “History of the greenhouse effect” by M.D.H. Jones and A. Henderson-Sellers. It was originally published in Progress in Physical Geography (14, 1-18, ©1990) and reprinted in a book that I bought in the mid-1990s: Global Warming: Selected Reprints by John W. Firor, published by the American Association of Physics Teachers, ©1995.

This Playground Slide Can Give You a ‘Feel’ for Building Science

Images of Fourier and Arrhenius in the public domain, from Wikimedia Commons. Photo of Tyson from brainpickings.com.