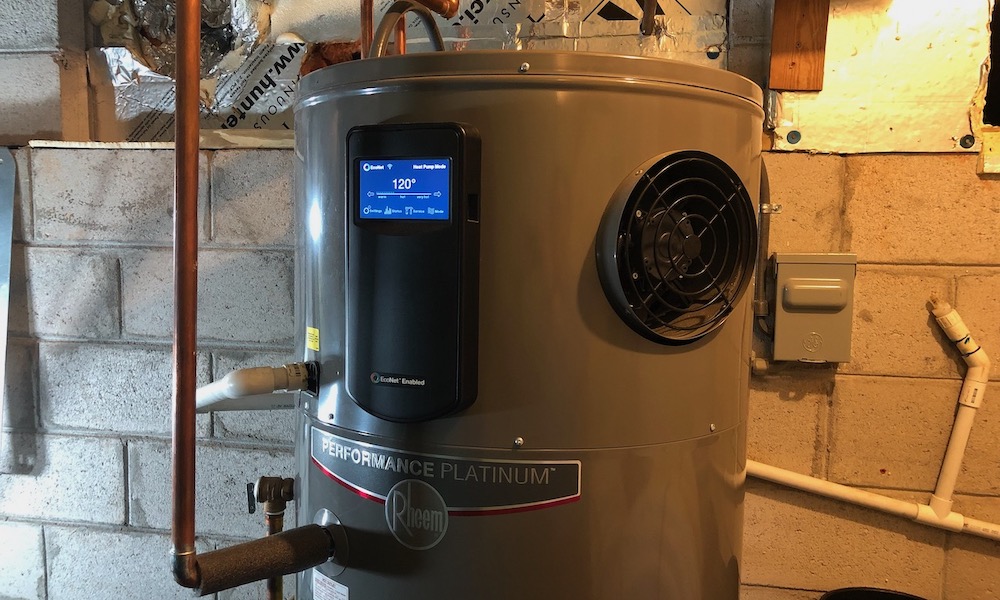 It was two years ago this week we had the nasty old fossil gas natural draft water heater removed.   (That’s it in the photo below.)  Outside of running a gasoline powered generator inside a house, this kind of water heater is probably the number one source of carbon monoxide in homes.  Yes, the hot water is cheap, but how much is your health worth?  So my replacement for this fossil was a heat pump water heater (HPWH).  It’s a Rheem Performance Platinum, and I love it!

I am not an expert in heat pump water heaters, and I don’t know the range and availability of products all that well.  But I have friends who keep up with that stuff, so I asked one of them.  John Semmelhack of Think Little is a big proponent of all-electric homes, and he recommended the Rheem model that I ended up buying.  Manufacturers are always changing their models, though, so my generation 4 has evolved into the generation 5 model (I think).  Also, when you’re searching for information, Rheem uses the term “hybrid water heater” because its main source of heat is the heat pump, but it also has built-in electric resistance heating.

One of the choices you have to make when buying any water heater is size.  I sprang for the 80 gallon model for one simple reason.  If I’m going to use a heat pump water heater, I want it to use the heat pump all the time.  I don’t want to use the electric resistance heating element at all unless the heat pump fails.  The smaller the tank you buy, the more likely it is you’ll have to use some electric resistance heating.

The bigger tank has the other advantage of having more hot water available.  My 80 gallon model has an 89 gallon first-hour rating.  Did I go overboard?  Yeah, probably.  I do that sometimes.  This weekend we’ll get to put it to the test as we’re having family in town for my 120th birthday party.*  That larger tank should come in handy.

The Rheem HPWH connects to wifi and has a nice app for your smartphone.  The screenshot below shows the main screen for the water heater, with the basic info about the generation (4), water temperature setting (120° F), mode (HP only), and links to other data (schedules, usage report, and wifi settings, to the left of the temperature).

And it has one annoying notice I wish Rheem would change.  That green bar is ALWAYS there for me because I’ve set the mode to heat pump only.  Their so-called Energy Saving mode would actually use more energy because it would use electric resistance heat sometimes.

We fired up (so to speak) our new water heater on 14 September 2019, so we just passed the two-year mark.  How much electricity have we used in that time?  The chart below shows our first full year of data.  The total was 486 kilowatt-hours (kWh).  The lowest month was August at 23.75 kWh, and the highest was December at 68.6 kWh.

Notice the pattern?  Water heating energy use is low in summer and high in winter.  The main reason for that is the entering water temperature.  As everything cools down in the fall, the municipal water supply cools down, too.  That means it takes more heat pumped into the water to raise the temperature to 120° F.

A second reason is that we use more hot water in winter, although I actually haven’t measured that yet.  Next year, however, I’m going to set up flow meters and temperature sensors on my all-new hot water plumbing when I remodel my basement.  Then I’ll have the data to prove it, at least in my household.  Those data will also tell me how many kilowatt-hours it takes to get a gallon of hot water, by each month of the year and averaged over the whole year.

A third reason we use more energy in the winter is that the HPWH pulls heat out of the air, and our basement air is cooler in winter.  In my case, we currently don’t heat or use the basement much so it’s not a big deal.  In cold climates, it can be a big deal.

Another nice feature of the Rheem app is that it can show your current usage compared to usage for the previous period.  The chart above shows it by month for 2021 so far compared to the corresponding months in 2020.  It also does daily by hour, weekly by day, and monthly by day.

Since it’s been just a couple of days over two years since I started up the heat pump water heater, I can tell you how much energy we’ve used in that time and how much it has cost us.  From 14 September 2019 to 14 September 2021, we used 1,002 kWh.  I also track our electricity use in a spreadsheet (doesn’t everybody?), and over that period, our average rate from Georgia Power has been almost exactly $0.10 per kilowatt-hour (excluding taxes and fees).  So we’ve paid just a bit (two bits actually) over $100 for two years’ worth of hot water.

How does that compare to our old fossil gas water heater, you ask?  We lived with it for less than three months, so I don’t have full data.  But based on the little that I do have, it looks like the gas water heater would have cost us close to the same amount (again, excluding taxes and fees).  So, there’s no direct economic benefit to switching from a gas water heater to a heat pump water heater…when I look at the cost based on rates only.

I had already made the decision to get rid of our gas furnace, however, and that meant our only remaining gas appliance would be the water heater.  At about $38 per month (screenshot above), the fees just to have gas would make the heat pump water heater a big money saver.  Based on a marginal cost of $1,200, the extra $450 per year in gas fees ($38 x 12) would give me a simple payback of about 3.5 years!

If I had replaced an electric resistance water heater, however, we still would have saved money; just not as much.  The efficiency of water heaters is rated by something called the Uniform Energy Factor (UEF).  Higher numbers are better, and my HPWH has a UEF of 3.7.  (You can see it on the EnergyGuide above.)  A standard electric water heater has a UEF of about 0.9, making my HPWH about 4.1 times as efficient.

Instead of 501 kWh per year, I would have used about 2,000 kWh per year with an electric resistance water heater.  At $0.10 per kWh, I would have saved about $150 per year on water heating.  With a simple payback of about 10 years in this case, it wouldn’t be hard to justify this purchase for economic reasons, assuming a 15 or 20 year lifetime and minimal maintenance costs.

One thing people have complained about with some heat pump water heaters is that they’re too noisy inside the house.  Some probably are, so I measured mine using the NIOSH SLM app on my phone.  Here are my results:

That’s pretty quiet.  For reference, here are some other noise levels on this scale:

Another nice feature of the Rheem model I bought is that it allows for the intake air and exhaust air to be ducted.  You can see the exhaust port in the lead photo.  It’s to the right of the digital display screen.  My water heater is in the basement, so I could run a duct up to the encapsulated attic to bring in warmer intake air and make the heat pump more efficient.  But it would be more trouble than it’s worth in my case.

Even if you don’t duct air from another place, the ability to duct intake air allows you to put a better filter on the system.  The filter that comes with it is one of those paper-thin, see-through filters that mostly catches larger stuff.  I haven’t done it yet, but when I remodel and move the water heater, I’ll also add a decent filter to the system and get it all sealed up to eliminate bypass.  I want to keep that coil as clean as possible.

Is it worth it?

In my case, it certainly was worth it.  We have low rates for fossil gas here in Georgia, but they come with high fees.  Getting rid of the backdraftable gas water heater was a high priority for me.  Not having to worry about low-level carbon monoxide poisoning (or worse) brings a peace of mind that’s priceless.  And I’m doing my part to decarbonize my existing home by going all-electric.  I could have saved on first cost by going with a standard electric resistance water heater.  Had I been ready to put photovoltaics on my roof, I might have done that.

I love my heat pump water heater and am really happy with it.  It’s quiet, efficient, and gives us all the hot water we desire.  It even provides a little bit of cooling and dehumidification.  And that’s the topic for an article coming later.