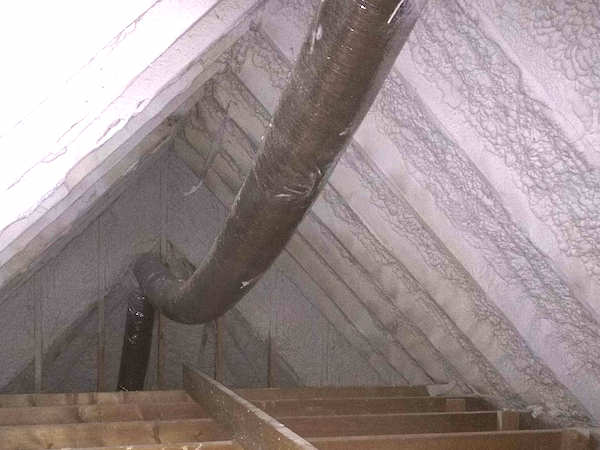 Some people love flex duct. Some people hate it. Some of us are OK with it if it’s done right. As I’ve documented here numerous times, many flex duct installations leave a lot to be desired. They sag. They’re kinked. They’re twisted around pipes. If there’s something bad that can be done with flex duct, someone has done it. And the result of all those mangled flex duct installs is poor air flow, which creates comfort problems, uses more energy, and is one reason systems get oversized.

A proposal to limit flex duct

Now, some professionals in the industry are pushing for limits on the use of flex duct. The I-codes from the International Code Council seem to get most of the attention, but there’s another set of model codes developed by the International Association of Plumbing and Mechanical Officials (IAPMO). The Uniform Mechanical Code (UMC) is their code for heating, cooling, ventilating, and refrigeration systems. As with the I-codes, it gets updated every three years.

Among the changes recommended for the 2018 UMC is this:

603.4.1 Length Limitation. Factory-made flexible air ducts and connectors shall be not more than 5 feet (1524 mm) in length and shall not be used in lieu of rigid elbows or fittings.

That’s a pretty strong limitation. If passed, adopted, and enforced, I believe it would have a positive effect on air distribution for HVAC systems. And although that proposal is labeled “Length Limitation,” it actually goes further than that by saying you have to use rigid elbows and fittings, too.

At one point, there was an exception for residential buildings to the proposal above. In one of the UMC meetings, however, that exception was struck from the proposal.

A few reasons to limit flex, including firefighter safety

Since I’ve been writing this blog, I’ve had a lot of bad things to say about how flex duct often gets installed. I haven’t been one of the voices calling for it to be banned, though. I think it’s useful product and can work just fine when it’s installed properly. But the truth is that building officials probably will never do enough enforcement to make it right.

In the typical flex duct install, you might find these problems: The two ways that air flow gets reduced in duct systems is through friction and turbulence. Flex ducts do worse at both of those than hard pipe. Because of the helical wire running the length of the duct, there’s more resistance to air flow. And although it’s possible to turn air with flex duct if you have enough space, it’s always better to use rigid fittings for that job.

Speaking of that helical wire in flex duct, it can become an entrapment hazard for firefighters. When a building burns and the rest of the flex duct material gets destroyed, the helical wire forms a big tangle that can drop through ceilings. (Search for the word “flex” in this article to see what I’m talking about.) When firefighters enter an area with that wire in the space, it can trap them. Firefighters have been trapped in duct and other wires and have died as a result.

Does anyone use the Uniform Mechanical Code?

Yes, the I-codes get most of the attention but the UMC is certainly used. The biggest is probably the state of California, which has adopted it as the base of their state mechanical code. Other code jurisdictions at various levels have adopted the UMC as well. It’s hard to know exactly who and how many. The IAPMO website doesn’t seem to give that information anywhere, nor does any other source that I could find online.

But the UMC is certainly in use, so this flex duct proposal, if adopted, could have a real impact.

This proposal is out for public comment now. If you want to make your voice heard, go to IAPMO’s website and leave a comment. You have until 5 pm PST on 3 January 2017 to do so. You can read the documents available for the 2018 UMC to find out more about it. Just be sure to select 2018 in the little drop-down menu for “Edition to display” near the top of the page.

Keep Your Elbow Rigid — A Lesson in Flex Duct Installation