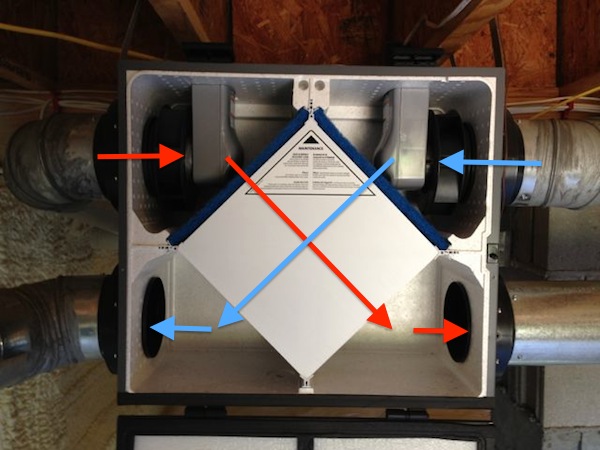 Let’s talk about one of my favorite subjects:  air.  Because of the global COVID-19 pandemic and the novel coronavirus (SARS-COV-2) that spreads it, the indoor air quality (IAQ) community—researchers, mediators, manufacturers, bloggers, groupies—is having a moment.  This must be the first time in history that IAQ researchers have logged so many hours on television and been quoted so frequently in news articles.  And they’re tweeting up a storm, too.  And that brings me to the tweet by IAQ researcher Dustin Poppendieck that served as the impetus for this article:

That tweet was one of four in a short thread he put out earlier this week.  His point was that the calculated air change rate is based on how much “new” air you put into a room, but that doesn’t mean you’re removing an equal amount of “old” air from the house.  The difference is mixing.  Some of the air removed will be the air you just put into the room, with the proportion of new-to-old air dependent on the amount of mixing that happens.  And that got me thinking…

What Poppendieck said is important, but he really just scratched the surface of this topic.  His tweet referred to a room, but what about larger areas, like a zone or a whole building?  What kind of air are we talking about here?  Air being recirculated through the heating and cooling system?  Air infiltrating and exfiltrating through the building enclosure?  Ventilating with outdoor air?  And what do we need to know about mixing?

Poppendieck’s point is that if you have a room full of air that has a certain concentration of pollutants, you probably don’t remove an equal amount of old air just by adding new air.  Thus, you don’t remove as many pollutants as you might think.  In his tweets, Poppendieck takes a kind of worst-case scenario, one which you get a lot of mixing and remove less of the old air pollutants.  He gave as an example the introduction of new air at the rate of 6 air changes per hour (ACH).  The other way to look at air changes is to flip it from air changes per hour to hours per air change.  So, 6 air changes per hour means that it takes 1/6 hours per air change.  At that rate, he said, instead of changing all the air in the room in 1/6 of an hour (10 minutes), it could take “up to 0.5 hours to remove 95%” of the old air.  So, a lot of mixing means that it could take, in this case, about three times longer to change out most of the air.

But what if you get little to no mixing?  You’d get most of the old air removed in about 10 minutes at an air change rate of 6 ACH.  How could that happen?  By putting the air in slowly and having the entry and exit points well separated in the room.  The ASHRAE Handbook of Fundamentals has a great chapter all about ventilation and infiltration, and they call this type air movement displacement flow.  (See diagram below, from chapter 16 of the ASHRAE Handbook of Fundamentals.) At the other end of the mixing spectrum is entrainment flow.  The diagram below, also from the ASHRAE Handbook of Fundamentals, shows what that looks like. If you’re in the HVAC industry, the word “entrainment” may be familiar to you.  ACCA’s Manual T on air distribution uses that word in discussing the mixing of air in a room.  The old air in the room is induced, or entrained, to move with the new (primary) air.  The result is that the new and old air get all mixed up in the room.  When you have fans or people walking in a room, the air gets even more mixed up. If your focus is removing pollutants from the room, it’s best to assume the new and old air get at least somewhat mixed up before exiting.

Where’d you get that air?

Although he didn’t mention it, I believe Poppendieck was talking about the new air being ventilation air from outdoors.  But air can enter a room in different ways.  Many of us live in homes with forced-air heating and cooling systems that recirculate air throughout the home.  If you have good filtration integrated with such a system, that can help, too.  I’ve written quite a bit about using filters rate at MERV-13 or higher, and they can reduce the pollutants in your indoor air significantly.  Fibrous media air filters won’t remove pollutants in the gas phase, but they can capture the particulates, including the droplets and aerosols carrying the coronavirus.

Then there’s the air that infiltrates into the house from outdoors or from buffer spaces, like the garage, crawl space, and attic.  Contrary to what some people still believe, a house does NOT need to breathe.  Breathing dead possum from the crawl space or air sucked through a dead squirrel in the attic is not as good as straight outdoor air.  The best thing to do is air seal the house as much as possible and rely on other ways to improve your indoor air quality. Mechanical whole-house ventilation systems help improve indoor air quality by introducing outdoor air into the house.  If the coronavirus is the only pollutant you’re concerned with, all outdoor air is good air.  But you should be concerned with more than just this one pollutant.  In most homes, the majority of the small particulates that are most dangerous to health (PM2.5) comes from outdoors.  During wildfires, there’s a whole heck of a lot of particulates in the outdoor air, so good filtration must be part of your IAQ strategy.  Also, in some areas, you may need to pay attention to your outdoor air quality on a regular basis and pick the best times to introduce outdoor air.

The last issue here is scale.  Poppendieck’s tweet focused on a room, which is the right scale for a quarantine room or a room where you might bring other people into your house for a while.  But all the air in your house is connected, and that can help.  If, for example, you set up a quarantine or entertainment room with an exhaust fan or exhaust vent for an energy or heat recovery ventilator (ERV or HRV) and your outdoor air is supplied to another part of the house, you’ll come close to having displacement flow.  That means you’ll be removing relatively unmixed air that has a lot of the original pollutants in it.

Air flow through a building is a complex subject.  If you’re a researcher, diving in and understanding that complexity is important.  If you’re a homeowner, teacher, or building supervisor, what’s most important is to look for ways to increase the amount of ventilation in poorly ventilated spaces, clean the air with MERV-13 or higher filters, and block infiltration from garages, crawl spaces, attics, or other places that have worse air than is in the house already.  You can also use portable air cleaners, like the Comparetto Cube, to help remove pollutants in a room.

David Byrne and the Talking Heads were ahead of their time musically, but did you know they were early advocates for good indoor air quality?  Here’s what they had this to say in the song Air:

So, pay attention.  Changing the air in your house, office, or classroom is critical.  But how quickly are you really removing the old air with all its pollutants?  And what are you replacing it with?  Ventilation, filtration, source control, and moisture control are your best options for good indoor air quality.

Some ‘a you people just about missed it!

Allison Bailes of Atlanta, Georgia, is a speaker, writer, building science consultant, and founder of Energy Vanguard.  He is also the author of the Energy Vanguard Blog and is writing a book. You can follow him on Twitter at @EnergyVanguard.