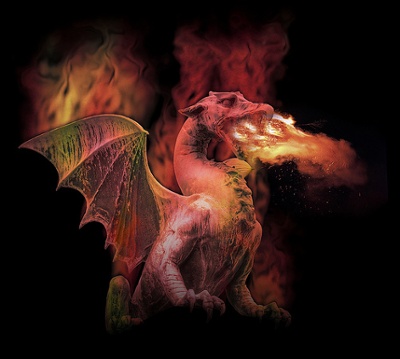 I went to see The Hobbit recently. Of course, the center of the story is a dragon, Smaug, that invaded the ancestral home of the dwarves many moons ago and set them on a long diaspora. The story begins as a band of justice-seeking dwarves, having conscripted the reluctant Bilbo Baggins from the Shire, set out on their journey to take their mountain home back. Preparing Bilbo for the dangers ahead, they describe the dragon to him: “Think furnace with wings,” one of them said.

So that got me to thinking. Have you ever considered heating your home with a dragon? The BTU output of one would certainly be high enough to ‘git’r done,’ as they say. And it could be the ultimate zoning strategy, possibly better even than mini-split heat pumps. (Well, OK, maybe not that good. Dragons can be temperamental, you know.)

Of course, you’d want to do a proper load calculation or time the runtime of the existing heating system and then choose the proper species of dragon. If you had a really high heating load, for example, you might want to choose a Ukrainian Ironbelly,* the largest species of dragon. At 60 feet long, they aren’t really suited for homes, but I could see using one in a larger space, like an arena.

The smallest adult purebred dragon is the Peruvian Vipertooth, and at 15 feet long, it might work for some larger homes. Naturally, you’d want to keep your distance, because it’s one of the venomous species. If you really have a deathwish, though, you’d probably go with the Hungarian Horntail, which is one of the most vicious. The Horntail also, to its credit, has one of the highest heat outputs. Because they’re so squirmy, it’s difficult to do controlled experiments to measure the BTU output of their breath of fire, but judging by the damage they cause, it’s an extraordinary heating capacity! For high performance homes, you’d certainly want to go with the infant and toddler dragons, not only because of their smaller size, but also because they’re still in the cute-and-cuddly phase. One species you might want to consider here would be the Swedish Short-Snout. According to dragon experts, “its powerful flame is also a brilliant blue colour – and hot enough to reduce timber and bone to ashes in seconds.” This dragon also the reputation of having killed fewer humans than other dragon species, although that’s probably due mainly to its isolation and lack of contact with us.

If you’re considering using dragons for heating your home, be sure to take all the proper precautions. My first suggestion is to find yourself a knight fully skilled in combustion safety!

*Yes, I know. I’m mixing J.R.R. Tolkien’s mythical Middle Earth dragons with the dragons of the wizarding world of J.K. Rowling. I’ve also recently used the Aztec calendar for the Mayan and even worn clear with muddy colors in the same ensemble. The world will go on, however, even though the Mayan calendar is coming to an end in a few short hours from the time I’m typing this line.

Image of dragon by Beverly & Pack from flickr.com, used under a Creative Commons license.