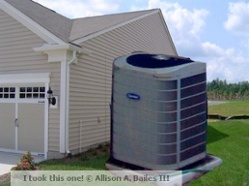 Apparently, I haven’t written a single article this summer about oversized air conditioners. Shame on me! I’ve written several in previous summers, mostly about how HVAC contractors bypass the HVAC design process by using rules of thumb and how they mess up the Manual J load calculations when they do go the preferred route. I’ve never written an article focusing on the reasons to size an air conditioner properly, though, so here it is.

When an air conditioner runs, it does two jobs. It lowers the temperature of the air, and it removes moisture from the air. To do the second one, the AC has to run for a while. summer, the other important process that happens when the air hits the coil is that the temperature of the coil is below the dew point of the air. As a result, water vapor condenses on the coil.

Here’s the thing, though. Water vapor condenses on coils in oversized air conditioners, too, but you have to get enough condensation on the coil for the water to start dripping down into the pan below the coil. Even then, you’re not there yet. You still have to get enough water in the pan for it drain to the outside.

If you live in the desert, what I just said above doesn’t matter to you. There’s no water vapor to condense on the coil, and if there were, your dew point is probably close to absolute zero. (Well, OK, that might be a bit of an exaggeration.) The second reason definitely should matter to you, however. The thing that wears equipment out is starting up and shutting down. The more it happens, the shorter the life of the equipment.

Will you save money?

People in the industry used to think you’d save money on your air conditioning bills with a properly sized air conditioner, but that thinking has changed. John Proctor wrote an article for Home Energy Magazine that shows only a small savings for the homeowner (but the utilities benefit by lower peak loads). You should save money on the upfront cost, though, because you’re putting in a smaller AC. (As Proctor points out in his article, oversizing isn’t always the worst problem, though. You have to be a subscriber to Home Energy Magazine to read the article, but it’s well worth the read if you can get it.)

How do you determine the proper size?

For new homes, use the full HVAC design process, which starts with Manual J, the heating and cooling load calculation protocol from the Air Conditioning Contractors of America, the trade association for AC contractors. For existing homes, the best way to do it is to see how long your current air conditioner runs when it’s at the design conditions. Of course, you want to do this while your AC is still in good shape, not when it’s on its last legs. If it runs for only 5 to 10 minutes before shutting off, it’s definitely oversized. If your runtimes are over half an hour at design conditions, it’s probably sized close to the actual cooling load.

If you’re building a new home, remodeling an existing home, or just getting a new air conditioner in an existing home, ask your builder, remodeler, or HVAC contractor how they’re planning to size the air conditioner. If they tell you they’re basing it on the size of your house, don’t let them do it. There’s a lot more to it than square footage of conditioned floor area, and of course, I haven’t touched at all on the capabilities of different types of equipment (single speed, fixed capacity, multi-stage, mini-splits…). More on that in future articles.